TBT – Why Everyone Loved Hubert Sumlin 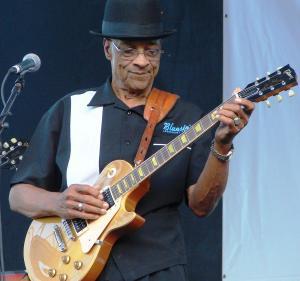 Editor’s Note: This week, Throwback Thursday pays tribute to Hubert Sumlin, a tremendously talented guitarist who touched innumerable lives with his music, and his loving spirit.

When guitar heroes like Eric Clapton, Jimmy Page, Jeff Beck, and Robert Cray talk of Hubert Sumlin, inevitably, their faces break out in a huge smile. Any time Sumlin’s name comes up among musicians, everyone discusses his playing, basically summed up with Jimmy Page‘s comment, “I love Hubert Sumlin. He always played the right thing at the right time.” After this discussion, almost without exception, everyone smiles and someone says “Yeah. Everyone loves Hubert.”

He was born Hubert Charles Sumlin on November 16, 1931 in Greenwood, Mississippi, but he was raised in Hughes, Arkansas. The future guitar hero began playing the instrument at eight years old. He first encountered Chester Arthur Burnett, a.k.a., Howlin’ Wolf, as a youngster when he had snuck into a performance.

As Howlin’ Wolf was a link to the past artists such as Robert Johnson, Sumlin’s work with him was cited as an inspiration by a whole new generation of artists including Eric Clapton, Keith Richards, Jimi Hendrix, Jimmie Vaughan, Robert Cray, and others.

Hubert Sumlin left us on December 4th, 2011, at 80 years old. Even today, following in his steps on the fretboard is a necessary journey for any blues guitarist, especially one seeking to understand Chicago blues. His passing left a huge hole in the fabric of the music community that is still felt today, but his music lives and brings joy to all who hear it. Upon his passing, Mick Jagger and Keith Richards paid for his funeral expenses.