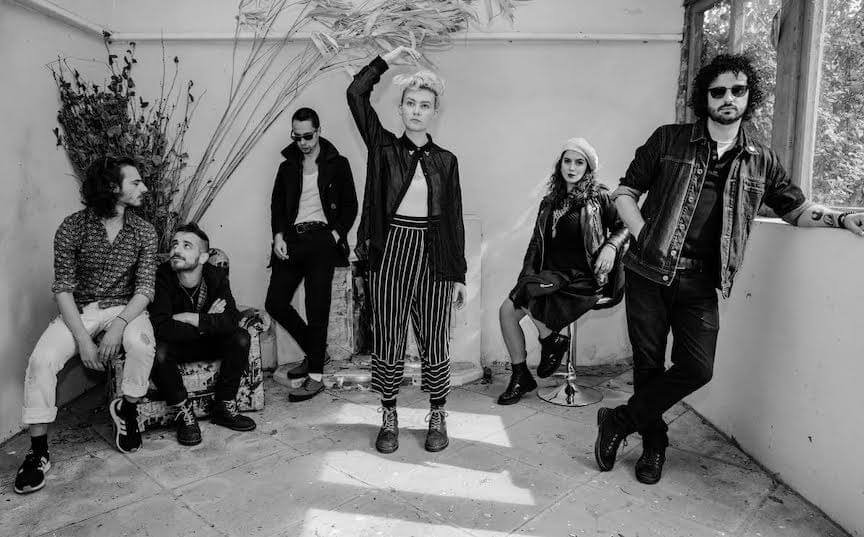 An unexpected twist followed the recent feature on the meteoric rise of Holy Moly & The Crackers climaxing with this Friday’s live-streamed New Beginnings show at the legendary Sage Gateshead. Each member of the band submitted a pen portrait of life in lockdown, with drummer Tommy Evans reflecting upon his participation in Sage Gateshead’s Summer Studios Program. This enabled Tommy to launch himself as a solo artist by using the residency to write songs, develop his practice and to film a live session.

Responses to Tommy’s video performance of “Anywhere I Look” on ABS, social media and national television have exceeded all expectations — particularly his gutsy, smooth and soulful vox described as reminiscent of early Springsteen.

ABS caught up with Tommy during rehearsals for Friday’s show to find out more about the drummer caught in the limelight.

A picture of The Doors features on your Facebook page. Is this significant in terms of your musical tastes?

The Doors are a great band. I really got into their stuff in my early 20s, I still listen to them now and again. But yeah, I can definitely say they were significant in terms of my musical development but I suppose tastes change over time. I’ve just never changed the picture!

Can you give us some background on your earliest musical influences including the first record you ever bought?

One of my earliest loves was Bob Marley’s “No Woman No Cry.” I used to play it on a cassette after every toy car race I staged in my bedroom as a child.  I didn’t start buying records until relatively recently… I guess Bob Dylan’s ‘Highway 61 Revisited’ was an early one for the collection. That one blew my mind.

Did you excel in music at school?

I can’t say I excelled in music from an academic standpoint, but I always loved to perform. I’ve never been able to read music but I would get up and play some thrash metal on the drums in front of the class. That was pretty fun as an angsty teen. I was honestly more into drama.

How did you get started playing drums and did you have lessons?

My mother bought me a drum kit when I was about 11. I didn’t really know what to do with it for a while but I started trying to play songs that I liked at the time. I got lessons at school a few years later from a great guy called Ian Hetherington, I still remember him. Drums have always felt quite natural to me but I can honestly say I still don’t really see myself as a real drummer.

Who is your favorite drummer and why?

There are a lot of drummers I admire for different reasons. Early drum crushes like John Bonham (Led Zeppelin) and Dave Grohl (Nirvana): Carlton Barrett who played for Bob Marley and a lot of the early reggae coming out of Jamaica. Elvin Jones, an incredible jazz drummer who played most notably in the John Coltrane Quartet. But I guess most recently my favorites have been Jack White and Kevin Parker of Tame Impala. Mainly because they’re all round musicians who have the ear for what the drums should be doing in a song. Sometimes drummers can’t understand that because they don’t see the big picture, that’s difficult.

Talk us through the best and worst aspects of being a professional musician?

That’s a tough one. I suppose it depends which way you look at it and what kind of person you are. Being a professional musician can give you an identity, it can make you feel part of something much larger than yourself and if you work hard enough, it can take you anywhere in the world. Personally I would find it very difficult to lead any other life, but there are drawbacks of course.

Firstly, the obvious question of money or lack of… Everyone knows it’s very hard to make any kind of living out of music these days. So if you’re looking for easy money, music isn’t for you. It’s really hard work; it’s uncertain and unstable, often unsustainable. That’s why I love it but some people would have a problem with that. I guess at the end of the day, if you’re willing to work your socks off for little or no money and no guarantees then it can work. But it’s great, really.

What is your most memorable moment when touring?

Holy Moly toured more than almost anybody and it was grueling at times. There are far too many stories to tell but one weekend always stands out for us all. I think it was the summer of 2017 or 18 (it’s all a blur) and we had a weekend of shows in Hungary and they were amazing and way too much fun. We then had a nice 7-hour trip to Colours of Ostrava in Czech. We arrived and saw the stage we were going to be playing on later that night and it was huge and daunting. We also assumed no one would be there as we had never played or had any contact at the time with Czech.

Anyway, we sound check and go off stage to prepare and when we line up to go back on stage to perform, the curtain comes back and there’s a huge crowd for us. We played an hour and a half set to about 6000 people and still to this day it’s one of my fondest memories, I’m not ashamed to admit I had a little weep to myself afterwards. That was really special and I got over excited and stayed up drinking at the hotel until 6am and we got picked up at 7am to fly home from Krakow airport. So I paid for it the next day in a big way.

Is your extrovert persona onstage the same as offstage?

Good question. For me, no.  Personally I like to keep myself to myself. I’m not one to be the center of attention. Being on stage is an act where you can live out your fantasies of being a rockstar or whatever you want to be. And I suppose it brings out an extreme version of yourself that you want to project to an audience. That’s the way I see it anyway, everyone is different.

What prompted your solo singing venture?

I have always written songs and known deep down that that’s what I really want to do. I also get a huge thrill from singing to people onstage. So when coronavirus happened, for me it was a catalyst. I suddenly had all this time to think and read and write and finally was able to start putting together songs of my own that I thought were good enough for something. Whether they are or not, time will tell.

What are your future plans?

The near future is Holy Moly again. We have bookings for the rest of the year. After that is anyone’s guess. By next year I’d like to be playing regularly on my own playing my own stuff. Release some music, build a fan base etc. But like I said before, music is uncertain by nature. And the world we live in today is going more and more that way so, who knows what will be happening in a year or two from now.

What advice would you give to someone embarking on a musical career?

I would say you have to be tough mentally, know what you want out of it from the start, don’t let anybody else tell you what to do or what to say. Be your own worst critic, never stop thinking about it day and night. Basically if you want a music career you need to be willing to give up your entire life in a sense. How does that saying go? You can’t have your cake and eat it too. But also, if you’re willing to work hard enough, then it could be the best choice you ever made.

What music is on your current playlist?

I don’t have any kind of playlists in a literal sense. I have a lot of music that I like to listen to and a collection of records. Artists I mainly like to hear at the moment; Bob Dylan (as much as possible), Van Morrison, Willie Nelson, Townes Van Zandt, Kieran Thorpe, Pip Fluteman, Jullii Sharp, The Buffalo Skinners, Rob Heron and the Teapad Orchestra… But what really gets me at the moment is Bob Dylan’s Theme Time Radio Hour. You ever hear it? That’s seriously good! In fact I will be putting that on after this interview!

If you were not a musician what would you be doing now?

If we lived in a world without music I guess I would just try my hand at travelling about the world, casual work, agriculture, manual labor. I wouldn’t be living in the UK, music keeps me here. I suppose I have always fancied myself as an actor or some kind of writer but I probably lack the talent. My dream is to be an old man on a Greek island, painting and drinking Retsina and watching the world go by; I spend a lot of time fantasizing about that.