What Guitars Did Muddy Waters Play?

Muddy Waters had an arsenal of guitars, both electric and acoustic

Over the course of four decades Muddy Waters played guitar on plantation shack porches, in sordid clubs, and on elaborate blues festival stages the world over. Throughout his career, he had a small army of both acoustic and electric guitars at his disposal.

Muddy Waters bought his first guitar at the age of 17 — a Stella acoustic that he bought for $2.50 from the Sears, Roebuck & Co. catalog. This Stella was the guitar on which he taught himself to play by listening to Robert Johnson records, and attending live Son House shows in the Mississippi Delta.

Alan Lomax first recorded Waters for the Library of Congress in 1941, and again in 1942 on the Stovall Plantation. For the 1941 sessions, he played a Martin Acoustic Guitar, which he borrowed from Lomax. In 1942, Waters is pictured with Henry “Son” Sims, while holding an unidentified wood-bodied resonator guitar. By the time he made his way to Chicago the following year, he had a Silvertone acoustic.

Waters realized that he needed to electrify his sound to be heard in the noisy South Side Chicago clubs. He bought his first electric guitar in 1944, playing it through a variety of small amps for easy portability. His only accessories were a capo, slide, and thumb and index picks.

By the time Waters began recording for Aristocrat Records, his first electric guitar had been stolen. He replaced it with a Gretsch Synchromatic. At the suggestion of Jimmy Rogers, he outfitted the Gretsch with a D’Armond FHC pickup to electrify it. Mud’s earliest hits, “I Can’t Be Satisfied,” “I Feel Like Going Home” (for Aristocrat), and “Rollin’ Stone” (after the label changed its name to Chess Records) were all recorded with that guitar.

In the early 1950s, Muddy switched to a 1952 Gibson Les Paul Gold Top. Equipped with P-90 pickups, it became his main guitar until 1957. Chess was only releasing the blues on 2-sided singles during these years, but some of Waters’ most influential songs — “Turn the Lamp Down Low (Baby Please Don’t Go),” “I’m Your Hoochie Coochie Man,” “Forty Days and Forty Nights,” “Got My Mojo Working,” and many more —  were recorded on this iconic Gibson.

Rumor has it that the Gold Top made its way through the hands of BB King, Eric Clapton, Peter Green, and others. Unfortunately its current whereabouts are unknown.

In 1957, Waters bought a brand new, 1958 Fender Telecaster. Originally white, with a maple neck, he replaced the neck with rosewood in 1961, had the guitar painted candy apple red, and replaced the knobs with those from a Fender amplifier. Nicknamed “The Hoss,” this Tele was the main Muddy Waters workhorse until his death in 1983.

“Hoss” is the guitar we see him playing when the Rolling Stones stopped in to jam with him at Buddy Guy‘s Checkerboard Lounge in 1981. Waters also played it on the album, Fathers and Sons, the 1969 Chess Records release which was his biggest mainstream success. It also would have been used on the controversial Electric Mud and the Grammy-winning comeback album, Hard Again, had Waters actually played on the records.

In a new twist, “The Hoss” was returned to Muddy Waters’ family on June 14th, 2017. An attorney representing Waters’ heirs took possession of the Telecaster and a second, custom-made guitar from Elizabeth Cameron, the widow of Scott Cameron, who managed Waters during his late-career revival and was the executor of Waters’ estate. 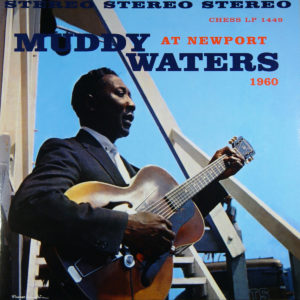 Muddy is pictured brandishing a Harmony Monterey archtop on the cover of his live album, At Newport 1960. However, it was the candy apple Telecaster that Waters played during the performance. The archtop Harmony actually belonged to John Lee Hooker, who also played the show, with Waters’ band backing him.

A 1959 Martin 00-18E acoustic/electric guitar was Waters’ weapon of choice for both the album, 1964’s Folk Singer, (featuring Buddy Guy on second acoustic guitar,) and at the 1968 Newport Folk Festival. The Martin now resides at the Rock and Roll Hall of Fame Museum in Cleveland, Ohio.

When Mud played Carnegie Hall in 1965, he broke out a Gibson SG Junior. Other guitars that he played during the 60s were 1963 and 1966 Guild Thunderbird S-200s because of a short-lived endorsement deal with Guild. The ’63 was cherry sunburst, and the 66 was ebony grain, both having single coil pickups.

Although he never had a “Lucille,” Muddy Waters had an arsenal of guitars, both electric and acoustic, and could play them all in his thundering, electrified Delta blues style.