“Tell Me Baby” is off of the album 'Burn it All Down' to be released on September 9th! 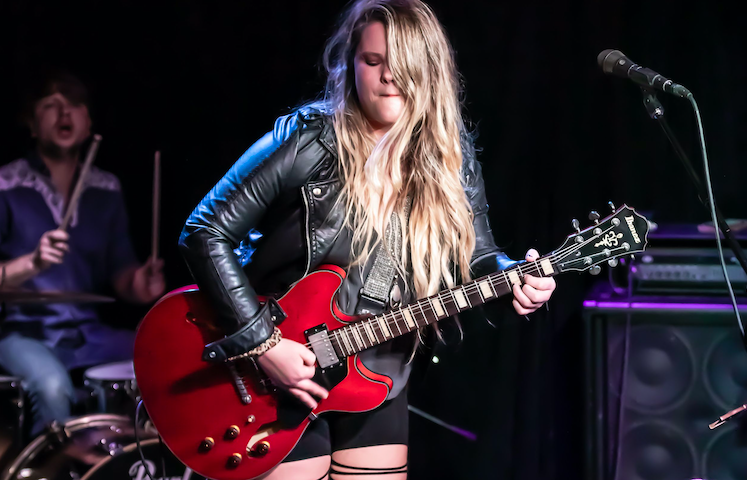 Today sees the premiere of the rompin’, stompin’ guitar-driven blues number “Tell Me Baby,” a single from the new album. The inspiration behind the song is a tale as old as time: the ill-defined relationship. “And dating someone who’s terrible at communicating. I did my best to tell this story in a new way and counter the lack of communication from the subject through clear musical themes.”

“Tell Me Baby” is also a showcase for the personnel that appear on the album. Produced by Lauren with the assistance of Taylor Lonardo (who mixed, mastered and engineered), a stunning cast – drummer Matt Doctor, bassist Hutch, guitarist Dan Wecht, keyboardist Johnathan Smith, trombone player Will Elliot and saxophonist and flautist Joe Douglas – lend their musical talents.

“My favorite thing about this song is the driving rhythm section and the chorus melody that is mirrored in the guitar part,” Anderson expresses. “When I wrote it I had a clear vision for the song, which isn’t always the case. The storyline of the song is about a person frustrated in a relationship and I really feel like my band did a great job of portraying that emotion through the music.”

All songs were written by Anderson, save for a co-write with John Salaway and Adam McDonough on “Hit The Spot.” Special guest Albert Castiglia, who she met through the late Kris Schnebelen (from the band Trampled Under Foot), makes an appearance. “He played drums for me not too long before he played with Albert. I’ve opened a couple shows for him and then his wife Michelle ran my radio campaign for Love on the Rocks. So when I wrote this fun, rocking blues song called ‘Zombie Blues’ I immediately wanted Albert on it! I’m so excited he was able to find time to track it in the middle of his busy tour schedule!”

For fun I asked her who she would want to collaborate with in the future. “If I’m reaching for the stars, then Grace Potter, Susan Tedeschi, and Bonnie Raitt are the first that come to mind. Those ladies are such powerhouses and it would be a dream come true to collaborate with any of them!” Like the ladies she mentions, Anderson herself defies boundaries not just with genres but by replacing outworn ideas with new ones. Burn it all Down seems a space for some cathartic songs, with an intrinsic concept promoting advocacy. “The music industry has always been dominated by men, but I’m excited to see more women stepping up and taking charge.”

The bulk of the songs were actually pulled from a songwriting challenge she participated in last year, where she wrote a song a day for a couple weeks. “Because I’m writing a song a day, I have to start pulling from different influences and I get to get a little out of the box. For example, the title track was actually written as a make-believe prequel to Chris Stapleton’s tune, ‘Midnight Train to Memphis’. It was fun to write a song where I know the ending is landing in jail for 40 days, which is what his song is about.”

Of her evolution as an artist, she tells me she’s learned to take more risks, as well as be a little more picky and intentional with songs. “My first album had almost every song I had written in the past decade. Now I only pick the songs that I think people can relate to and go well together on an album. I’ve also become more fascinated with studying what pulls people into a song.”

Modern musical influences are indeed heard in her music, but interestingly Anderson was classically trained for much of her life. And her background in music therapy working with at-risk youth has broadened her worldview, which in turn shapes her musical meaning and approach. “I think my background in therapy comes through during shows a lot as well as in my songwriting. I love creating music that helps people work through things and connect to each other.”

Anderson’s ultimate goal in live performance is to show fans a good time, but in such a way that the emotional vocal and backstories of her songs resonate long after. With live events and large venues officially re-opening, she enthuses, “We’re hitting the road! And I haven’t stopped writing so we’ve got lots more to come!”