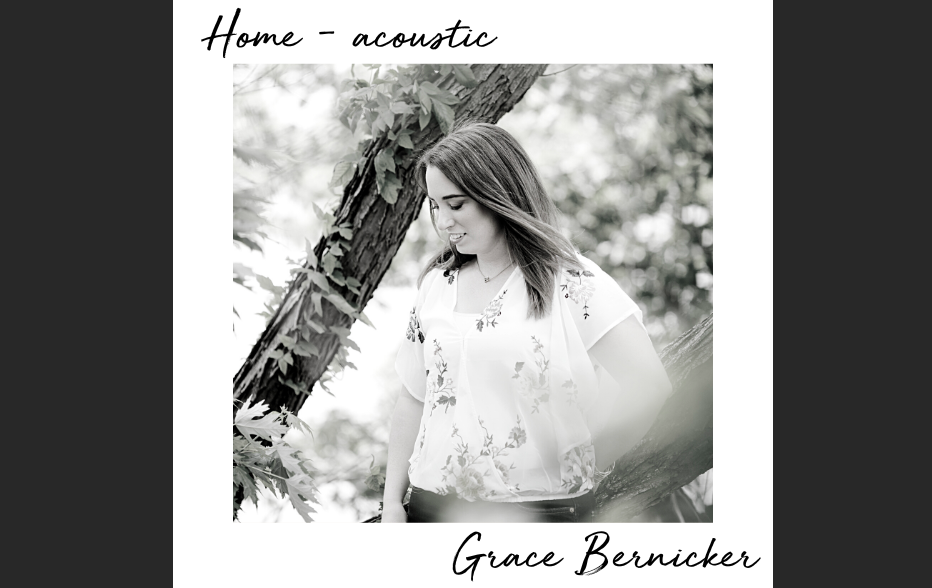 Philadelphia-based singer-songwriter Grace Bernicker has been getting back to her roots in pop/soul and is excited about heading in a new direction. She typically performs as a duo with a guitar player. Her music has been described as having a strong lyrical quality, that at once paints a picture and shares a story with her audience. She has released the video for “Home,” her latest soothing and soulful song and the first one she ever recorded and put out in 2012.

She explains, “Since then, we’ve played it a million times. In live shows, it’s primarily always played acoustic. I’ve always wanted to put out an acoustic version. Given it’s how we play it live, I wanted to share that with the wider world as well. I wrote ‘Home’ back in 2012 and got the idea after being away at school and having not seen my family in a while. My Mom and I were driving down the highway, were passing farms, a little white church and basically all the imagery that you hear in the song. To me there is a double meaning with ‘Home,’ it’s being with the person you love, but at the same time, when you are apart, knowing when you both look up, you see the same sky.”

“Home” was recorded in December of 2021 at Morning Star Studios in East Norriton, PA. “At the time, covid was still very much a thing and it was my first time back in a recording studio since the start of the pandemic,” says Grace. “Everyone wore masks. When I recorded vocals, I was in the main room and Kevin (Huffamoose) Hanson was in a side booth, playing the guitar line, verse the two of us being in the same space. We could see each other through the glass window of the studio, so that was basically how we were giving each other cues. He did a killer job with the guitar line! Glenn Barratt produced the track and we both co-engineered it. This was my first-time co-engineering one of my songs. I love the engineering side of music, so getting to do that was a lot of fun!”

After living in several cities throughout her life including Philadelphia, New York, and Nashville, Grace finds a unique way to make them all feel like home. “When I wrote this song, I was not living in Nashville but was working with a producer out of Nashville, Kenny Lamb. We used to ‘skype’ before Zoom was a thing & we actually co-wrote this song via “skype” and a few voice memo ideas. I came in with the chorus and the general outline for verses 1 and 2 and then we worked together to polish it up a bit. I believe we wrote the bridge together. That was actually my first foray into co-writing. I absolutely loved it, even though we were writing via skype and from then on, I was hooked!”

She continues, “Above all else, ‘Home’ for me is being with my family and loved ones. Essentially, it’s being able to go anywhere in the world and as long as you’re with the person you love, you’re home. To revisit (the song) a decade later is special. As a songwriter, I tend to have a thing for strong visuals in my lyrics. I love to paint the picture for the listener and bring them right into the moment. Sometimes songs come to me as little movies, fully formed with the beginning, middle and end. I then figure out how to say it all in three minutes. It doesn’t always happen this way – but very often it does.”

In conjunction with the release, Grace has created a line of merchandise called the At Home Collection which is centered around her song. “I wanted to create a collection of items, I’d personally like to receive,” enthuses the songwriter.

“Nothing against the standard t-shirt, but I wanted to make it the kinds of things you’d actually want to give your friends,” she continues. “Each item was created by a small business maker and there is a lyric line from the song tied into every item. Currently in the collection we have – a journal, a set of lyric and art dish towels, a tote bag and handwritten lyric sheets to ‘Home.’ The dishtowels come in a set of three, each with a separate lyric line and image from the song. I love all three, however the one with the vintage truck is probably my favorite! They were designed by Nashville based artist Prince Empathy.”

Grace will be playing select shows and releasing new music throughout 2023.