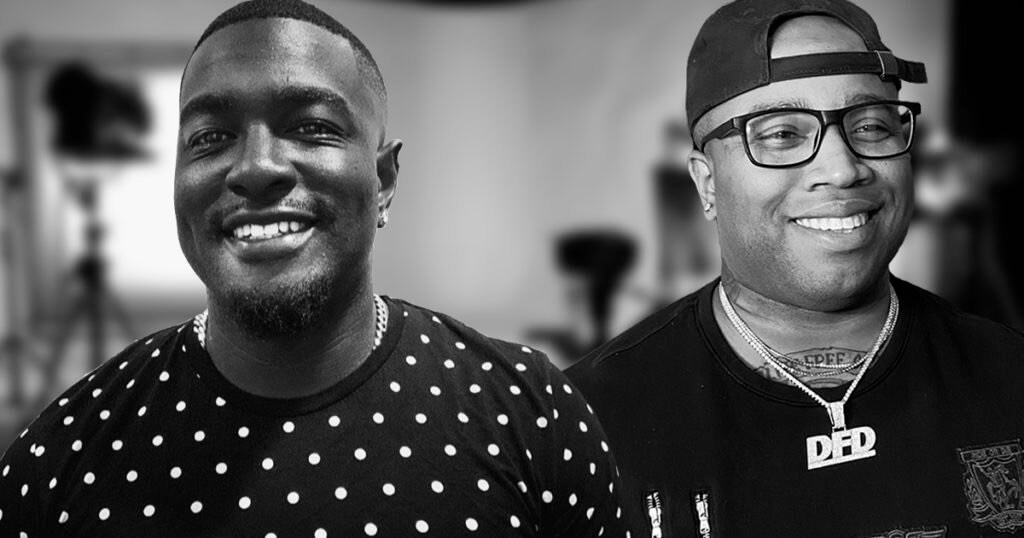 Davis Chris and Mr Foster have jumped headfirst into the blues pool, and made a big splash.

It all began when two US veterans, Chris Davis AKA Davis Chris and Shane Foster AKA Mr Foster met on their first day of college at the Los Angeles Film School. Both being veterans and both having an intense love of music, they not only hit it off, but began what would become DFD Music, a company for which they are not only featured artists, but also offer marketing, production, engineering, mixing, mastering, consultation, and more. Their latest endeavor is the 7-track release Wings and Blue Cheese which drops tomorrow (9/4) world-wide.

The duo has worked in the genres of hip-hop, R&B, soul, and most recently reached #8 on the Billboard Gospel Charts with their single, “Things Change.” Now they delve into the blues, and all that means, with Wings and Blue Cheese, adding a youthful, street-wise sound to the genre. Wings and Blue Cheese stretches the limits of what is traditionally recognized as blues music, but that’s the whole point. They’re intent on bringing the sound to a younger generation, introducing them to blues much in the same way British Invasion bands brought it to my generation.

The album kicks off with “Marinate,” a soulful song, with biting guitar, and feature artist Eric Debonair McNair. Beginning with this track, the entire album is a game-changer. I didn’t recognize the song as blues at first listen, but then, after playing it a time or two more, all of the elements are present, and then some. “Look before you leap/Better practice what you preach/Let it marinate.” They’ve combined soul, R&B, blues and pop into one single, secular sound that is not only catchy, but damned good.

Where the trend in blues/rock is longer, and sometimes jam-length songs, the tracks on Wings and Blue Cheese are more to the 2020 scale of being under 3 minutes. Now before anyone poo-poos that idea, remember that many original Delta blues songs and nearly all early rock n roll tracks were in those same time constraints. I say if an artist can get their point across in under 3 minutes, and still make it pleasing, play on!

“Watch Yo Mouf,” is a funk/gospel merger that grabs your attention from the outset. The production of the backing vocals is inspired, and the touch of blues harmonica is right on time. The lyrics are simultaneously fresh and timeless. “Feelin’ Bad,” with featured artist Chel, will leave you anything but. This uber-funky offering is as poppy and uplifting as anything out, making the song become its own oxymoron.

There’s a lot of good old, down-home, gospel foot-stomping, hand-clapping enjoyment on this record. “Chattanooga” featuring Andy Horton is rife with it, which just naturally makes me feel good all over. Who says you need a Sunday morning minister to take you to church? Horton’s punk-rock edged vocals do it just fine for me.

“What Would it Take,” with featured artist Cecily Wagner, is the one torchy, slow-burner on this record. Her clean, clear voice vaults over the slow-driving rhythm of the song, bringing to mind the great soul music of Philadelphia circa 1974.

There was only one disappointing song, at least to me, on Wings and Blue Cheese, “Play Your Part,” featuring W!ll, and that’s only because it clocks in at only 1:06. My disappointment came from wanting to hear at least 2 more minutes of it. W!ll makes up for it on the album’s closer, “Hold it Over My Head.” The longest song on the release (and still just over 3 minutes), it starts with some slow funk, and even though the lyrics have a man begging to get his woman back (sound familiar?), the music underlying it builds into a joyful, sonic celebration.

Davis Chris and Mr Foster have jumped headfirst into the blues pool, and made a big splash. Once the purists remember that the blues is a living, breathing, ongoing thing, they’ll come to realize, as I did, the sheer genius of Wings and Blue Cheese. These two artists have done the work, paid their dues, and are on the brink of something truly huge. I can’t wait!