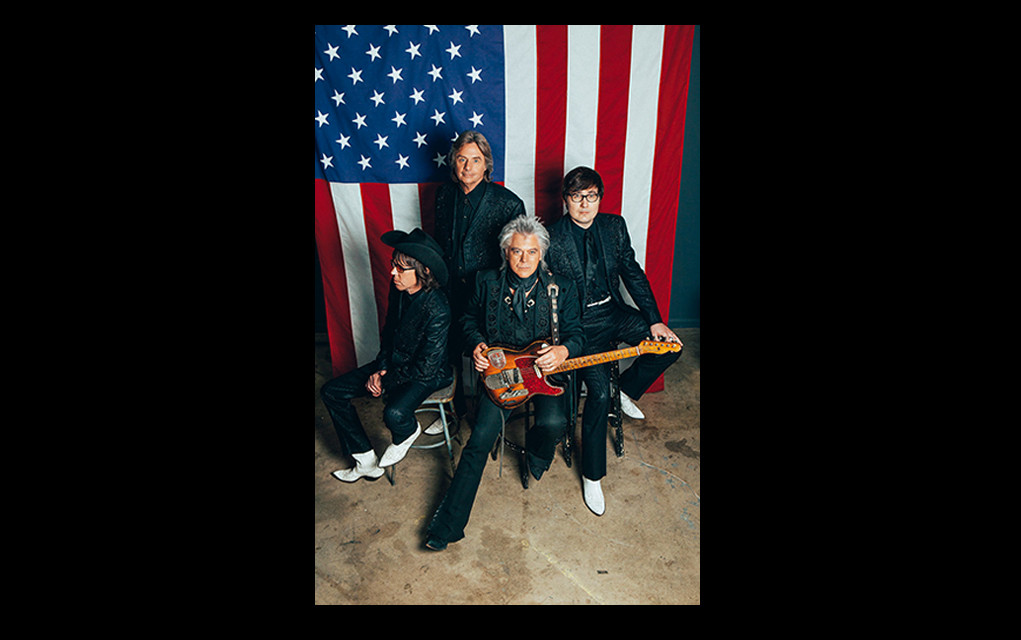 Stuart has released his new album 'Way Out West," and has begun touring behind it. He and his Fabulous Superlatives will be appearing on The Late Show, and The GRAMMY Museum® at L.A. LIVE will present 'Marty Stuart's Way Out West,' a new exhibit opening May 25, 2017, featuring artifacts celebrating the personal collection of Marty Stuart.

Five-time GRAMMY-winner Marty Stuart & His Fabulous Superlatives will appear on The Late Show With Stephen Colbert on April 24th, ahead of their headlining New York City Bowery Ballroom show on April 26th. Stuart and his band will perform “Time Don’t Wait” off their critically acclaimed album, Way Out West, and the episode will air on April 24th at 11:35 PM ET on CBS.

The just released acoustic video for Marty Stuart’s “Wait For The Morning” captures a stirring and stripped down performance of the song, and you can watch it here.

Marty Stuart recently announced fall tour dates with Chris Stapleton. Stuart will be a special guest opener for arena dates in Baton Rouge, San Antonio, Bossier City, Austin, and Grand Rapids. Tickets are on sale now and can be purchased here. Stuart also announced the West Coast leg of his headlining US tour in support of Way Out West, his 18th studio album. The new dates include stops in Los Angeles, Berkeley, Salt Lake City, Seattle and Portland (full dates below, with additional dates to be announced). Tickets for this tour are on sale now and can be found here. Ticket holders can also enter for the chance to meet Marty at a private meet and greet before each show here.

Marty Stuart released Way Out West on Superlatone on March 10th. The album was conceived as a love letter to the promised land of California by one of Country music’s living legends, who has played with everyone from Johnny Cash to Lester Flatt. NPR Music proclaims: “Way Out West is Marty Stuart’s album-length paean to the myth and magic of the American West. It finds country’s stalwart neo-traditionalist turning cosmic cowboy for a journey through the Joshua trees, shadowy canyons and desert dreams that tantalize travelers with the promise of a golden shore on the other side.” Way Out West is available on CD, vinyl, and digitally here.

Marty Stuart shared his new music video for “Torpedo,” a rollicking instrumental track off Way Out West, via Guitar World. The video strings together behind-the-scenes photos taken during the creation of Way Out West, and provides a glimpse into Stuart’s studio process. Watch the video for “Torpedo” here. Marty Stuart also premiered the video for his new single, “Way Out West,” on Billboard. The video follows a trip, in more than one sense of the word, through the Mojave Desert as narrated by Stuart, and captures his fascination with the American West. The GRAMMY Museum® at L.A. LIVE will present Marty Stuart’s Way Out West, a new exhibit opening May 25, 2017, featuring artifacts celebrating the personal collection of Marty Stuart. Click here to see a video of Marty Stuart making the announcement backstage at the GRAMMY Museum.

Produced by Mike Campbell (Tom Petty and the Heartbreakers), and featuring the Fabulous Superlatives –guitarist Kenny Vaughan, drummer Harry Stinson and new member, bassist Chris Scruggs– Marty’s longtime band, which NPR Music said could “melt your heart with four-part harmonies, rock your bones with honky tonk, and dazzle you with picking worthy of their name,” Way Out West is a cinematic tour-de-force.

Growing up in Philadelphia, Mississippi, Stuart was taken by the mystique of the Golden State: the culture, the movies and especially the music. “Everything that came out of California captivated my kid mind in Mississippi,” says Stuart. As such, the album could only be recorded in California, and Way Out West was tracked between the famed Capitol Records, which birthed iconic albums like the Beach Boys’ Pet Sounds and the country-rock of Glen Campbell’s Wichita Lineman, and producer Mike Campbell’s M.C. Studio, where much of the early Heartbreakers music was recorded. Said Campbell about producing Stuart’s new record: “Working with Marty and the Superlatives was a blast, and it was fast! My role was easy, just set up the sound and let them play. Great guitars, great grooves, great vocals, they just have it all. This record is one of my favorite things I have ever been involved with.”

Marty Stuart is a five-time GRAMMY-winner, platinum recording artist, Lifetime Achievement Award recipient from the Americana Music Association, Grand Ole Opry star, country music archivist, photographer, musician, and songwriter. Since starting out singing gospel as a child, Stuart has spent over four decades celebrating American roots music. His teenage years on tour with bluegrass legend Lester Flatt in the ’70s were followed by six years in Johnny Cash’s band in the ’80s, and a chart-topping tenure as a solo artist in the ’90s. Stuart hosts a Late Night Jam at The Ryman, a yearly tradition which kicks off the CMA Music Festival, with recent guests including Dolly Parton, Jerry Lee Lewis, Neko Case, Eric Church, Chris Stapleton, Maren Morris, Dan Auerbach and more.