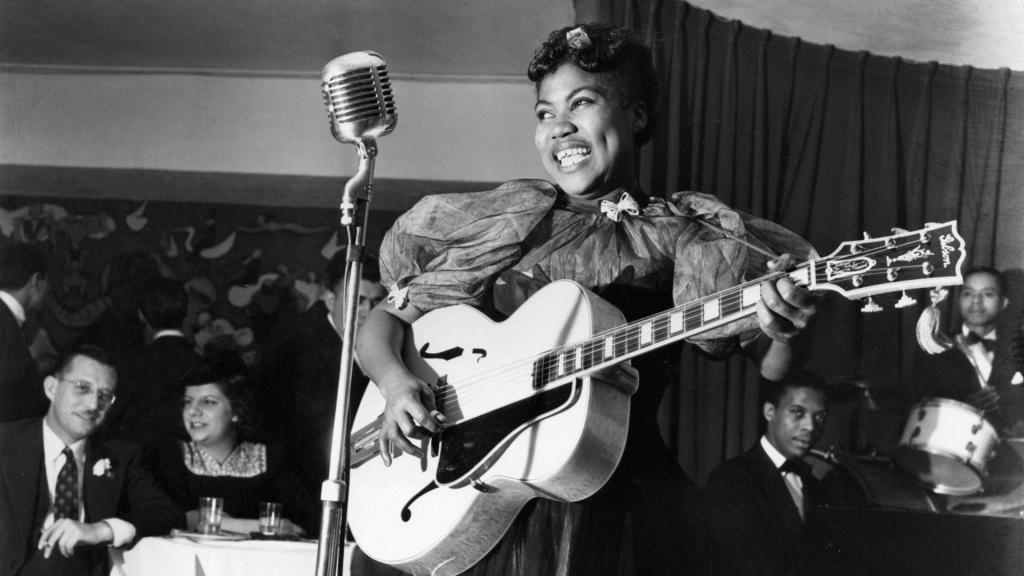 Throughout history countless women have given the blues a unique stamp, and fought their way to the front of the testosterone saturated genre, oftentimes with little praise.

Throughout history countless women have given the blues a unique stamp, and fought their way to the front of the testosterone saturated genre, oftentimes with little praise.

Here are twelve of those women. These blueswomen paved the way for the musicians of today, or currently carry on the torch, while most likely intimidating the living hell out of their male counterparts.

Sister Rosetta Tharpe, also referred to as the “Godmother of Rock and Roll,” is one of the most important people in music history. From the 1940s to 60s, Sister Rosetta cultivated and mastered her thunderous combination of stompin’ Gospel, and electric blues rock guitar.

Her 17 albums and striking live performances played a crucial role in the formation of rock and roll guitar. Elvis Presley, Jerry Lee Lewis, Johnny Cash, Little Richard and Chuck Berry each cited her as a major inspiration.

Music wouldn’t be what it is today without Tharpe’s influence, and despite being criminally underrated for decades, she was finally inducted into the Rock and Roll Hall of Fame this year.

“Women Be Wise,” and “Mighty Tight Woman” may be associated with Bonnie Raitt, who featured the songs on her debut album in 1971, but Sippie Wallace is the legendary woman behind them.

Wallace was one the standout American blues stars of the 1920s. Despite only recording four albums in her lifetime, she was a pioneer for blues singers and songwriters across the world.

The songstress left show business to become a church organist, singer, and choir director in Detroit until the 1960s, when she successfully resumed her career, playing the blues until her death in 1986.

Bessie Smith, also known as the “Empress of the Blues,” made her mark on the music world during the 1920s and 30s, and rose to fame with her 1929 hit rendition of “Nobody Knows You When You’re Down and Out.”

Blues scholar C.C. Rider described Smith: “A mean temper, with a mouth like a sailor, a penchant for whiskey, and a taste for both men and women, Bessie Smith lived a life that would drop the jaws of even the baddest rock star.”

Smith has been regarded as the most popular blues vocalist of her era, thanks to her distinctly rich and robust vocals, and has since influenced singers from all walks of life, including Janis Joplin, who paid for her tombstone in 1970, more than 30 years after her death.

“When The Levee Breaks” has long been associated with Led Zeppelin. What many don’t know is that it was the bad-ass blues bird Memphis Minnie and her husband Kansas Joe McCoy who wrote and recorded it in 1929.

She presented herself in public as feminine and ladylike, but according to her piers she chewed tobacco, carried a pistol, and never backed down from a fight.

With grit, power, and feel, Minnie was doing the devil’s work as a guitarist, vocalist, and songwriter from the 1920s to 50s giving her prominence in the male dominated genre.

In 1920, the multi-talented Mamie Smith made history by becoming the first African-American to record blues vocals, with a track called “Crazy Blues.”

Smith, who was a singer, dancer, pianist, and actress, is really where it all began. Not only was she unafraid to take charge, and do something no one of her race had done before, but she did so with charisma, and what seemed like heaven-sent aptitude.

This blues powerhouse took the first step on a long winding trail, proving to her fellow African-Americans with a bad case of the blues, that they too could do something about it.

Nicknamed the “Mother of the Blues,” Ma Rainey was one of the first professional African American blue singers.

The moaning songstress made her first album in 1923, making her one of the first blues singers to record. She went on to record nearly 100 sides between 1923 and 1928.

Rainey toured with her husband Will Rainey in their band Rainey and Rainey, Assassinators of the Blues, and later she recorded with Louis Armstrong, and the Georgia Jazz Band. She continued to tour until her retirement in 1935.

Her bottleneck slide guitar playing, and vocal prowess has influenced an abundance of musicians since the early 1970s. Raitt has been listed at #50 on the Rolling Stone Greatest Singers of All Time list, as well as #89 on their Greatest Guitarists of All Time list.

Bonnie has played alongside many of the blues’ biggest male figures, including BB King, Buddy Guy, and John Lee Hooker. Never taking a back seat, she’s continually been testament to the fact that when it comes to playing the blues, women can do it just as well as the guys, if not better.

With her fiery, spirit filled voice, and blues guitar chops, Susan Tedeschi has proven to be one of contemporary blues’ biggest saviors.

Her inspiration came from blues, but also Gospel, soul, and jazz.

Tedeschi got her start in a church choir, and has since released 12 albums, been nominated for six Grammy® awards, and much like Rainey, writes and tours the world with her husband Derek Trucks in the Tedeschi Trucks Band.

For over 20 years, Beth Hart’s hauntingly soulful, vibrato charged vocals have left audiences shaking with admiration, and seen a number of her 20 LPs top the charts around the world.

Her career began with winning Ed McMahon’s Star Search in 1993. In 1999, Hart got her big break with the album Screaming for My Supper, while simultaneously performing the lead role in the off-Broadway musical, Love, Janis.

Hart is not only one of the most gifted singers on earth, she’s also a multi-instrumentalist who can play piano, guitar, cello, bass guitar and percussion.

Shemekia Copeland has been singing the blues since she was 10 years old.

As the daughter of Texas blues guitarist Johnny Copeland, she was bottle-fed the blues, and was encouraged to pursue a full time career in the music industry at 16 years old.

Throughout her 20 year career the sassy singer has been nominated for two Grammys, won a Blues Music Award, and in 2011 was hailed as the new “Queen of the Blues” by Koko Taylor’s daughter.

Chances are that if you’re a blues fan, you’ll have heard Samantha Fish’s name repeatedly in recent years. Since picking up the guitar at age 15, the 20-something musician has done wonders for contemporary Blues.

Fish is not only a gifted guitarist but a singer/songwriter. She has played countless festivals across the world alongside blues legends, topped the blues charts with three of her albums, and won a Blues Music Award.

Since 2010, Larkin Poe have been helping to keep the blues thriving with their roots infused take on the genre.

The band, fronted by sisters Megan, and Rebecca Lovell, have three albums and five EPs to their name, and have toured around the globe playing headline shows and festivals.

With their near perfect guitar and vocal harmonies, the Georgia natives are some of the toughest blues players in the business. It’s safe to say the future of the blues is in good hands.

Who are your favorite female blues artists? Let us know by sounding off in the comments below. 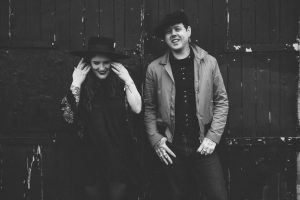