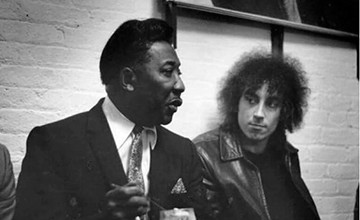 Editor’s Note:  This is the fifth and final installment of this series which honors the 2016 Blues Hall of Fame inductees.

1.  Although Elvin Bishop was born in Glendale, California, he was raised on a farm outside Elliot, Iowa and moved with this family to Tulsa, Oklahoma at age 10.

2.  In 1960, Bishop won a National Merit Scholarship to the University of Chicago to study physics.

3.  He met Paul Butterfield (also a University of Chicago student at the time) in the Hyde Park area of South Chicago in 1963 and joined the Paul Butterfield Blues Band. He was with them for five years, taking the lead guitar spot when Mike Bloomfield left the band in 1967.

4.  Due to his rural upbringing, Bishop acquired the nick-name “Pigboy Crabshaw.” In 1967 the band used it in the title of their third album, The Resurrection of Pigboy Crabshaw.

6.  He had a long and complicated relationship with Chicago bluesman Little Smokey Smothers.  Smothers who had played in Howlin’ Wolf’s band as well as leading his own group, The Pipelayers, was Bishop’s main influence and teacher in the blues. Later it was Bishop who replaced him in the Paul Butterfield Blues Band.  In 2000, Alligator Records released, That’s My Partner, a live album featuring them both and recorded in San Francisco.  They also played together at the Chicago Blues Festival, Ground Zero in Clarksdale, Mississippi and several other places.  After Smothers had both legs amputated due to diabetes, Bishop put together a benefit album, Chicago Blues Buddies, a compilation of recordings with the both of them dating back to 1992, with proceeds paying the cost of Smothers’ medical bills.

7.  Bishop was nominated for a Grammy in the Best Traditional Blues Album category for his 2008 Delta Groove release, The Blues Rolls On. He has been nominated for fourteen Blues Music Awards, winning three in 2015 for Band of the Year, Album of the Year and Song of the Year.

9.  Bishop is no stranger to tragedy.  In the summer of 2000, his former wife, her boyfriend, Bishop’s daughter and two others were murdered in a bizarre pseudo-religious extortion plot by a group calling themselves the “Children of Thunder”.

10. Along with his 26 album releases, Bishop has also played and recorded with The Grateful Dead, The Allman Brothers, John Lee Hooker, Bo Diddley, BB King, James Cotton and Clifton Chenier.