Jennifer talks about her new album, her creative family, collaborations with artists across many genres, and the timely call she received from Trey Anastasio (Phish cofounder) when he asked her to join his band. 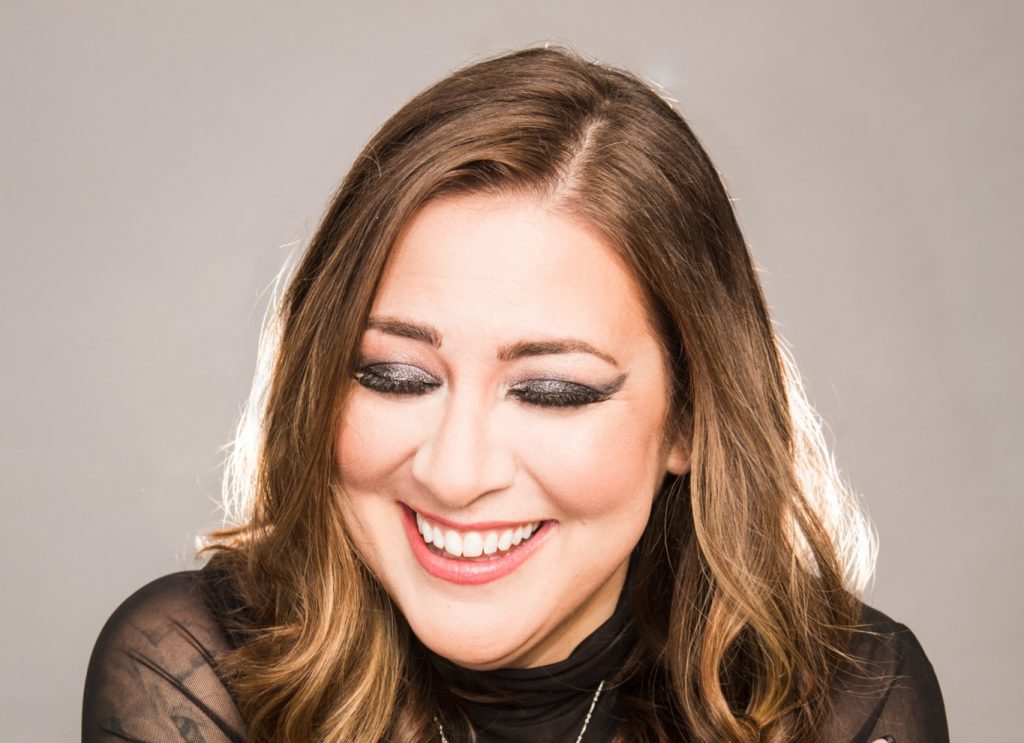 It would be a mistake for blues fans to pass up the new album by Jennifer Hartswick, Something in the Water, just because Google searches peg her primarily as a jazz artist. Her versatility as a trumpet player and vocalist is reflected in the varying rhythms and moods of her music. Her cover of Randy Newman’s “Guilty,” recorded in a single take as a duet with Christian McBride – Grammy-award winning bassist, composer, and artistic director –  is nothing like the original version yet captures all of its pathos.

Then there’s “By The River,” a New Orleans romp that allows Jennifer room to wail on her trumpet. Another original, “For You,” gets funky with the tale of a woman who’s outgrown her immature lover. Jennifer collaborated with her producer, guitarist, writing partner, and fellow Vermonter Nicholas Cassarino in composing the album’s songs over a 10-day stay at a closed Vermont bed and breakfast during the pandemic.

Jennifer’s whimsical nature and self-effacing humor come through in the video for “Only Time Will Tell.” We watch as she struggles to find the right words to tell her man he’s on thin ice. She empties a bottle of whiskey, paces in the street, tosses and turns on the couch, and practices kung fu moves with a broom in the kitchen. She is open to showing her silly side and believes, “People take themselves too seriously.”

Jennifer grew up in tiny Sheffield, Vermont, just 25 miles from the Canadian border, and was born into a family of female brass players, including an aunt she describes as a monster French horn player. Jennifer formed her first band, a power trio, at age 7 with her brother Nathan (now the owner of The Vermont Comedy Club in Burlington) and friend Conor Elmes on drums. It must have been a winning combination; Conor plays on most of the cuts on Something in the Water.

She considers Vermont to be the perfect place for her to have grown up. “It’s a place where I felt growing up anything was possible, and I wasn’t judged for it. It was a great place to be a weirdo. I grew up in the woods being weird, and it really worked out for me.”

Now a resident of Nashville, Jennifer lives with husband Chris Chew (bassist with the North Mississippi Allstars for 14 years) who contributes vocals to one track on the album. They bought a house there just before the pandemic shut everything down and enjoyed the rare opportunity to spend time together when they were both unemployed. She’s now back to playing 300 gigs a year.

You’re really the first jazz-focused artist I’ve interviewed, so you’ve introduced me to many new artists as I prepared for this interview. But you perform with everybody; I saw a video with you and Keb’ Mo’.

That was the first time Keb’ and I had met when we made that video together. We share Christian McBride in common. Christian and I showed up at the radio station as part of an NPR thing. Keb’ thought I was there solely as a singer, which I am, but he didn’t realize I play trumpet. He told me, “I saw a woman and thought you were a singer, and I’m such a jerk for that.” He was very sweet.

I’d heard you talk in other interviews about being born into a musical family. What’s it like to have your grandmother play trumpet?

It was normal; it’s what we did. She used to come over and give me lessons every week. She was really strict, and I hated it. But I did it; she would kick my butt otherwise. I’m looking at a picture of her right now when she was 19 and holding a trumpet. It’s the coolest thing. It was just part of how we grew up, and every woman in my family was a brass player. I didn’t think anything of it until I got older and realized that not everybody grew up that way.

Not only did the women in your family play brass, but your brother Nathan is a comedian.

We spent so much of our youth writing sketch comedy shows and putting them on. We’d write the music, the shows, the script, we’d play in the pit for musicals. We used to do all sorts of theatrical stuff as kids. It sort of carried over into our adult lives, and we took the paths that we took. He’s three years older and played trumpet all the way through high school. He said he quit the day that I got better than him which was my freshman year of high school. He went more in a writing direction with his life and has written lots of plays. He and his wife opened up the Vermont Comedy Club a few years back.

It sounds like your folks were supportive of whatever you did.

Yeah, my mom is a brilliant musician but a major introvert, so she gets a kick out of all this stuff. She would never do it herself but thinks it’s wonderful. She found other ways to get her creativity out and was a music teacher for many years. She used to direct the Vermont Children’s Theater. She affected a lot of kids’ lives.

Tell me about your dad. Is he a musician?

How did you first meet Trey Anastasio?

Vermont is a very small state, and he was living there. I was aware of Phish, but was not a fan because I was a total jazz/classical nerd. In 1998, Trey was making his first solo album called One Man’s Trash and needed a trumpet player. He asked a mutual friend, a great saxophone artist named Dave Grippo, who he should get, and Dave had this light bulb moment, “You haven’t met Jen yet. You’re going to love Jen!”

The way Trey describes the story, I walked in at 17 years old with a bunch of 40-year-old men, and I was the only one who knew my part. He told me, “We kept having to stop for everyone else, but you came in, you knew it, and you played it right every time.” I did another couple albums for them, and then I started playing with the band full time probably in 2001.

After high school you attended the Hartt School?

Yes, it’s part of the University of Hartford. The jazz program at that time was the Jackie McLean School of Jazz. He was still alive at the point, and that was the appeal. I was only there for three semesters before I quit. The best thing that came out of there was the students I met there, some I still play with. It wasn’t the right place for me at the right time. I just needed to be somewhere else. I called my folks and said, “I’m coming home,” and they said, “No problem.” I was about ten minutes away from their driveway and my Nokia brick cell phone rang, and it was Trey.

The timing of that!

He said, “Do you want to be in a band with me?” And I said, “Sure.” He said, “We’re rehearsing at my house right now, can you come?” I told him I was four hours away, but he said, “We’ll still be here when you get here.” Then we were on tour about two weeks later. I don’t believe in coincidence. You’re meant to do what you’re doing with whom you’re doing it in the time that you’re doing it.

Was that your first experience with hard-core touring?

Yeah, I’d never been on a tour bus before. I was the only female in a band of 11 people. I was very fortunate; you hear so many horror stories about young women who go on the road. But all of these men were so respectful and really took care of me. All of those guys are my uncles and brothers. Everybody in that band was a dad and almost all of them had daughters. I wasn’t that much older than their kids, and they felt a real responsibility to take care of me.

How did you get used to knowing what to take with you for X amount of days? How do you adjust to that?

At first, I didn’t want to be the stereotypical woman who took too much stuff, so I under packed out of spite. I didn’t always look great, but I always had a smaller suitcase than the guys. I can also hold my bladder for way longer than any man because I didn’t want to be the girl who had to pee all the time. That’s still true today. But now, I don’t care as much. If I go out and have 15 shows, I’ll bring 18 outfits. I’ll always over pack a little bit, but it’s fairly under control.

You’ve said you found your real stage persona and your voice with Trey’s band.

It took a while, but I thought I could make myself much more employable if I sang as well. It worked for me.

What is your vocal range?

The honest answer is, I have no idea. I don’t want to know because I don’t want to put limits on it. I don’t know if I’m supposed to be able to hit that note or not; I just assume I can hit it. That’s kind of how I roll.

You met Christian when you joined a James Brown tribute band in New Orleans. He’s said how excited he was that you could hit the high B flat in “The Big Payback.”

I was a fan of his since I was a kid, but our paths never crossed – until they did. We’re great friends, and he’s such an incredible musician. To have him in my corner is unbelievable. To call him a friend is one of the great joys of my life.

It’s cool how musical worlds collide. You can do anything from a gorgeous cover of Radiohead’s “Creep” with Nicholas to a fusion of “Electric Avenue” and “Highway to Hell” with Umphrey’s McGee in Iceland. I saw a video of you with Marcus King doing a swinging version of “Further On Up the Road” that was amazing.

You’ve got to know how to do everything if you want to stay employed. You have to do a little bit – and a little bit more – of everything. That’s something I never thought about when I was a kid until I got out here. That’s the only way I started singing. I used to just play trumpet. I didn’t know what my own voice sounded like until I was about 25.

How do you find your audience or new audiences?

We’re about to find out. So much of what I do is the jam band audience, but I think the jazz and blues audience would really dig this album. We’re branching out into those venues and realms, which is why I partnered with Christian’s Mack Avenue Music Group Imprint, Brother Mister Productions, because that’s kind of their bag.

They’re much more of a jazz label. I feel like those people who love and appreciate that kind of music would dig what we’re doing. We’re kind of in uncharted territory as far as I know, but the jamming kids are so supportive of what I do. They come to shows and buy music and buy merchandise. They’ve been so good to me.