The Language of the Blues: CAPTAIN

Many delta blues men sang about the mean ol' captain, including Son House and Robert Johnson. Now find out what "Captain" REALLY means.

The overseer of a plantation was “the captain” and was typically addressed by the slaves as “Captain.” As renowned blues scholar Gayle Dean Wardlow, who was raised in Mississippi, said in his in-depth Blues World interview, “You hear a lot of old blacks singin’ about the captain told me this and that. Ain’t no doubt about it, he was the captain, you’d do what he said to do.”

After Emancipation, many Southern white employers still expected to be addressed as Captain by black employees. In “John Henry,” Big Bill Broonzy sang of the captain who threatened to bring in the steam drill and put his manual laborers out of work:

Lord, a man ain’t nothing but a man
but before I’d let your steam drill beat me down, I’d die with a hammer in my hand

The wardens at country prison farms were also called “Captain.” Son House was sentenced to hard labor on Parchman Farm, a.k.a. Mississippi State Penitentiary, for shooting and killing a man at a house party, allegedly in self-defense. House served two years before a judge in Clarksdale re-opened the case and had him released, on the condition that he leave Clarksdale.

House sang about his prison time in “County Farm Blues:”

Down South, when you do anything, that’s wrong
They’ll sure put you down on the country farm
Put you down under a man they call ” Captain Jack”
He sure write his name up and down your back

The Mississippi Department of Archives and History says that Parchman Farm “was in many ways reminiscent of a gigantic antebellum plantation. Prisoners worked ten hours a day, six days a week in its cotton fields, and building roads and barracks. In 1905, Parchman’s first year of operations, the State of Mississippi earned $185,000 (around $5 million in today’s dollars) from Parchman Farm. 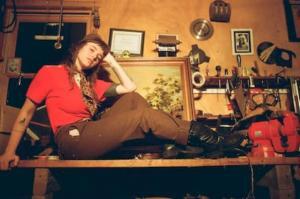