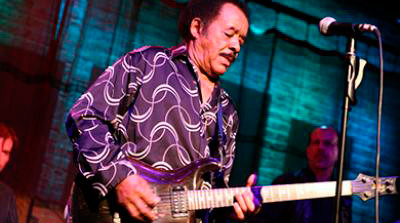 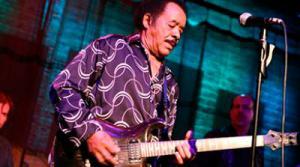 As we continue our look at the 2016 Blues Hall of Fame honorees, here is our second of six informative pieces on this year’s  inductees; Jimmy Johnson.

1.  Johnson was born James Earl Thompson on November 25th, 1928 in Holly Springs, Mississippi to a family of musicians including his father and two younger brothers.

2.  The name Johnson was first adopted by his brother Sylvester “Syl” Johnson, who became a famous blues and soul singer in his own right.  Jimmy, and their brother Mac (bassist for Magic Sam) followed suit and changed their last name to Johnson as well.

3.  As a teenager, he considered Matt “Guitar” Murphy his best friend, although Johnson, himself, didn’t seriously take up guitar until moving to Chicago at the age of 21.

4.  When the family moved to The Windy City in 1950, Magic Sam was their next door neighbor.

5.  After focusing primarily on Gospel music, Johnson began playing blues professionally in 1959, although he veered into the genre of soul in the 1960s because the gigs paid better and he was able to tour with his brother, Syl, as well as other popular artists including Bobby Rush and Otis Clay.  When he began to focus on the blues again in the early 1970s, his style continued to reflect an R&B flavor.

6.  Johnson’s only charting hit was “Don’t Answer the Door” in 1965 which reached #16 on the Billboard R&B Chart.  The following year, BB King covered the song and took it to #2.

7.  It wasn’t until the age of 50 that Johnson released his first solo material.

8.  His song, “I Need Some Easy Money” won the award for Blues Single at the very first Blues Music Awards in 1980.  Since then he has won Blues Music Awards  in 1983 (Blues Song of the Year “Country Preacher”), 1985 (Contemporary Blues Album/Foreign “I Didn’t Give a Damn if Whites Bought It!” with Eddy Clearwater) and 1996 (Comeback Blues Album “I’m a Jockey”).

9.  On December 2nd, 1988, while returning to Chicago from a tour stop in Indiana, the van which Johnson was driving veered off the road and crashed, killing two band mates; keyboardist St. James Bryant and bassist Larry Exum.