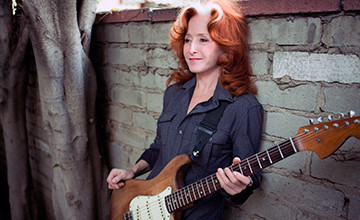 Bonnie Raitt has been a force of nature for four-and-a-half decades. Whether as a singer/songwriter or brilliant  interpreter of the vast range of her favorite composers, Raitt has delivered the goods in styles that have included blues, pop, country, jazz and rock.  Most people looked forward to her 20th album, Dig In Deep, on her own Redwing label, as a return to her blues roots.  It is that; but so much more.

Raitt produced the entire album (with the exception of “You’ve Changed My Mind” which was written and produced by Joe Henry  for the Slipstream sessions), wrote or co-wrote 5 of the 12 tracks and, of course, sings and plays throughout.  The production is tight, the recording and mastering are just what we like to hear; not over-produced, but rather done in such a way that the instruments and vocals are brought to the forefront when they’re supposed to be there and nothing is buried in the mix.

The album begins and ends with Raitt originals.  The opening number, “Unintended Consequence of Love” is a funk-rubbed delight that wafts on the air like a summer barbecue.  The closer, “The Ones We Couldn’t Be” pays deep homage to the pain of a breakup in the true approach of the singer/songwriter. With essentially just her vocals and piano, there is little else backing her, yet the song leaves you feeling like you just read a diary entry.

Always an expert at selecting songs to cover, Raitt has not left us lacking.  With her interpretation of INXS’ “Need You Tonight”, she took a quintessential mid-80s pop hit and made it more sultry, more provocative and, dare we say, sexier.  Conversely, she took the fun, upbeat, roadhouse rocker “Shakin’ Shakin’ Shakes” by Los Lobos and via her gravel laden voice and dividing the lead guitar licks with George Marinelli, amped it into a full on brawl, leaving sweat and blood on the dance floor.

As is her trademark, Raitt recorded Dig In Deep with her touring band, Marinelli, “Hutch” Hutchinson, Ricky Fataar and Mike Finnigan with special guests Jon Cleary, Arnold McCuller, Maia Sharp and Patrick Warren.  This makes for an stellar mix as they have been playing together for years and it has become second nature.

One might assume that after so many years of recording and touring that Raitt’s voice may have lost a step or two; and one couldn’t possibly be more wrong.  With the exception of a bit more grit, her vocals are commanding and strong. The few times her voice does crack, its right where it needs to, adding just that much more emotion.

Being a disciple of Muddy Waters, Mississippi Fred McDowell, John Lee Hooker and others, Raitt taught herself bottleneck slide guitar and has, herself,  become a virtuoso in the craft. Her talent in that department shines through this project as well, with her slide mastery present on 8 of the 12 tracks.  On the remaining 4 she provides either guitar, piano, vocals or a combination of these.

With every great musical undertaking there is one adhesive that we may not notice right away, but were it not present, it would surely be missed.  On this venture we have to tip our respective hats to the Hammond B3 playing of Mike Finnigan which appears on nearly every track.  At first listen you just notice that’s there is something special about this music, then it hits you; not like a dump truck, but more like a familiar whisper.

In the last few years, Raitt has endured great loss, taken time off from her near constant touring, written more songs than she’s contributed to any single project since the 1990s and produced this wonderful album. Dig In Deep is rowdy, soulful, introspective, fresh and 100 percent pure Bonnie.