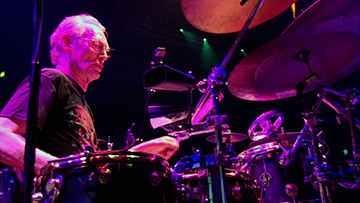 Legendary drummer Ginger Baker will no longer be able to perform live according to a message posted on his Facebook page on February 27th.

‘To all fans; it is with great sadness that we announce the cancellation of all shows. Ginger’s doctor’s have insisted that he have complete rest due to diagnosis of serious heart problems. We hope you will all join with his family in wishing him well. God bless Ginger Baker. ‘ Team Baker”

The 76 year old Baker is best known for his time in the first real super-group Cream, with Eric Clapton and Jack Bruce from 1966 through 1968. After the breakup of Cream, Baker joined the second super-group, Blind Faith, again with Eric Clapton, and also Steve Winwood and Rick Grech. The group was active for only a few months in 1969, releasing one album, Blind Faith.

In 2013 Baker had told Rolling Stone, “It’s troubling. At the end of the gig I’m absolutely exhausted.“

With the cancelation of remaining live dates, both Baker himself, and certainly his fans, are deeply disappointed. Fans did leave comments expressing encouragement and well wishes for Baker.