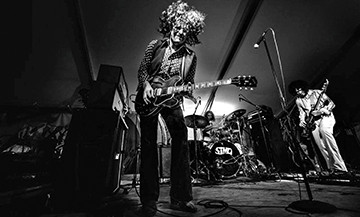 There are times when we throw an album on, and as soon as the first notes invade our ears, nestling deep into our temporal lobe, they smoke our brain. Admittedly, these occasions are rare, but they do happen. One that immediately comes to mind is the Santana masterwork Abraxas. Muddy Waters’ Hard Again is another. These are works that grab us from the outset, and we are not released until they have had their way with us.

Let Love Show the Way is just such an album; no argument can be made otherwise. A Provogue Records release, the album contains 13 tracks, clocking in at 68 minutes. Friends, that’s over an hour of solid, mind bending, soul satisfying blues rock that will make the hairs on your neck stand at attention.

These performances exude quality at every turn, whether it’s the exceptional mix and recording quality, or the clean production that allows these powerful tracks to percolate, affording them the immediacy they’ve earned. “We live and die by the take,” says singer-guitarist JD Simo. “We don’t edit, and if there are overdubs, they’re minimal. I want it to be unaffected and pure. For me, the music that always resonates most is when a performance is captured. That’s what I love, and that’s what we go for.”

Simo are singer-guitarist JD Simo, drummer Adam Abrashoff and bassist Elad Shapiro. These gentlemen are tight! We thoroughly enjoyed every second of this disc, but as always, we did have our favorites.

“Two Timin’ Woman” tips its hat to the Allman Bros. while being its own monster ride; large, full, gritty sound that shook us. “I Lied” is what RHCP would sound like if they were less funky and more rock oriented; killer track indeed, and yes, our head was bouncing up and down. “Let Love Show the Way” is a beautifully indulgent, deep sonic journey that takes its time. “Ain’t Doin’ Nothin'” is just breathtaking. Period. Strong, controlled contained, focused energy held masterfully in check, but always ready to burst forth at any second. “Please Be With Me” shows the band’s acoustic chops, which are considerable.

Did we mention that these fellas are tight? Throughout the album, the vocals are just so, and the guitar work is utterly insane; controlled frenetic dispersement. There’s a reason that some have referred to Simo as “The Best Guitarist in Nashville.” Listening to this album is akin to riding a Minuteman missile all the way to its target: There’s the beauty of the ride itself, enjoying all that power, that for the moment is holding us close, carrying us along, eventually depositing us in the midst of the final burst, and the payoff.

Let Love Show the Way is without question one of the finest blues rock albums released in years. Pick it up now!