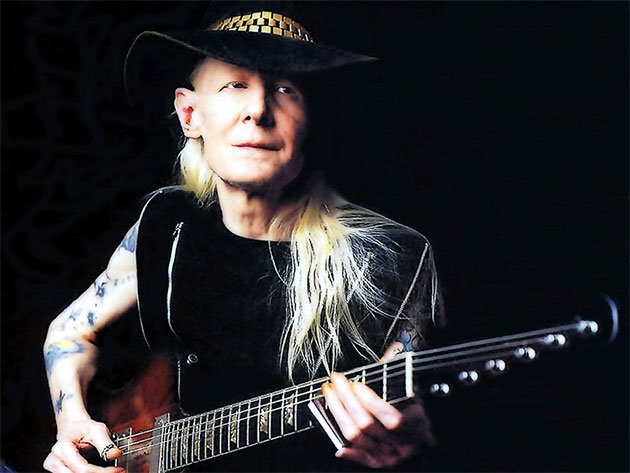 In 1977, he produced the Grammy-winning album, Hard Again, for Muddy Waters on Winter's label, Blue Sky.

1.  Although coming from a prominent Leland, Mississippi family, John Dawson Winter, III was actually born in Beaumont, Texas, his mother’s hometown, while his father was in the Army.

2.  Before picking up a guitar, Winter first played clarinet beginning at age 5 and then ukulele.

3.  In 1962, at the age of 17, Johnny and his younger brother, Edgar Winter, were at a BB King show in Beaumont and talked King into allowing Johnny to get on stage and play.  It was his first experience playing blues to a black audience.

4.  Although he had recorded a few local singles, he got his big break in 1968 when a Columbia Records representative heard him play a BB King cover with Mike Bloomfield at the Fillmore East and offered him the largest advance in the history of the recording industry at that time.

5.  Winter was the first artist, ever, to release a sesquialbum (a three sided double album).  In 1969, his three-sided album, Second Winter, was released on two 12-inch discs, with the flip side of the second disc being blank.

6.  An accomplished slide player, Winter tried several different objects including watch crystals, lipstick cases and test tubes as a slide before settling on a piece of plumber’s pipe that fit his finger well.  He used that same piece of pipe on every recording and at every performance for more than 30 years.

7.  One of the artists that actually got paid to play at Woodstock ($3,750), he missed out on any film royalties and career assistance because his manager, thinking the movie wouldn’t make any money, didn’t allow the band to be in it.

9.  The Winter brothers unsuccessfully sued DC Comics in 1996 for defamation.  The comic, “Jonah Hex: Riders of the Worm and Such”, featured two characters, Johnny and Edgar Autumn, which strongly resembled the brothers but cast them in a bad light.

10. Johnny Winter became the first non-African American artist to be inducted into the Blues Hall of Fame in 1988.