As a young man, B.B. King called Indianola, Mississippi home. On Front Street, in the heart of the town, he played his guitar in door frames and on the streets, honing his craft for what would become one of the most celebrated musical careers in history. It was for this reason that Indianola constructed a striking 20,000 square foot, $14 million tribute to the revered bluesman; the B.B. King Museum and Delta Interpretive Center. The B.B. King museum may claim the distinctive honor of being the largest and most grand museum dedicated to a single living musician in the world, and for a man that is lovingly known across the planet as the King and Ambassador of the Blues, it is more than fitting.

The museum purchased a 1920s brick cotton gin building that B.B. himself worked in as a young man, and created a striking modern building around it, made from finished wood and brushed steel. It opened it’s doors in 2008, with a grand ceremony attended by Mr. King and many members of his family.

Inside the museum, the first stop is to watch a short movie that both takes the viewer to a recent show of King’s, and on his tour bus, where he drives to a forgotten piece of Mississippi Delta farmland, as per the audio instructions recorded by his father, that he believes to be the place of his birth. “I would give anything to have a picture of my mother,” laments King. Inside the museum lies a vast, intricate and interesting set of displays that seamlessly mesh with one another. The exhibits eloquently tie with both the timeline of King’s long and accomplished life, and with the changing greater world around him. Early sets display tools, pictures, and artifacts from life in the Mississippi delta during the 1920s and 30s, portraying the brutal conditions worked by sharecroppers as they picked cotton from “kin ’til kint”, as B.B. says. In other words, from the time they “kin” see the sunrise to the time they “kint” see the sun any more. Life in the delta was hard, but Saturdays were a time of freedom from the work, a time where the people congregated in the streets and in dance halls, house parties and Juke Joints. A picture of the famous Po Monkey’s Juke Joint in Merigold, Mississippi is plastered across an entire display wall. Pictures of a crowded Front Street in Indianola, a street just a few blocks away from the state-of-the-art museum, are framed on the walls with stories of how B.B. would play on the streets those Saturday nights, honing his craft. Interesting pieces of history are on display from Beale Street in the 1940s — when King broke the smokestack of his employer’s tractor and, fearing what the man might do, fled to Memphis to carve out a living making music on Beale Street. In true Riley King style, he came back later to pay for the damage to the tractor. 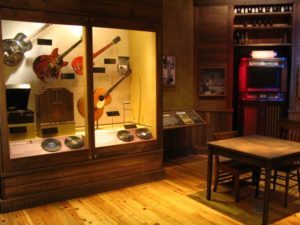 As the life of B.B. Progresses, so, too does the world. B.B.’s rise to prominence in the 50s gave way to the civil rights movement, Soul music, and a strong, steady growth in B.B.’s popularity as he traveled the globe with his own distinct style of blues. Stories follow B.B.’s marriages, divorces, successes and road troubles, always with a strong eye towards the genuinely good and endearing international superstar that B.B. is and has always been.

The museum piece ends with an extremely fitting final quote from B.B., “I had never heard the word ‘superstar’ but when I think about it today, I was a superstar tractor driver. I loved it.” Though a stroll through the museum feels like mere minutes, it’s easy to get lost for hours in the many exhibits and fascinating snapshot of both life in the Mississippi Delta and the long career of the king of the blues. The state-of-the-art center is worth a pilgrimage to, and is a fine celebration of one of our greatest musical treasures.

To find out more about the B.B. King Museum & Delta Interpretive Center, visit their website