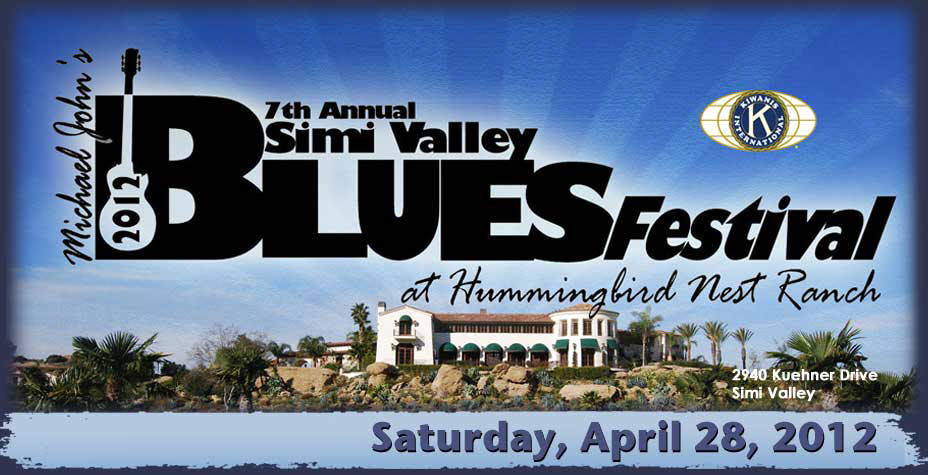 (SIMI VALLEY, CALIF) – Mark your calendars! The 7th Annual Simi Valley Blues Festival, one of the most anticipated Blues festivals of the year in Southern California, takes place at beautiful Hummingbird Nest Ranch, 2940 Kuehner Drive, Simi Valley on Saturday, April 28, 2012. Gates open at 10 a.m. Tickets are $25  in advance and $30 at the gate. A portion of proceeds from the festival benefit the American Diabetes Association along with other local charities.

Check out an interview with Festival founder Michael John here.

Curtis Salgado is widely regarded as one of the most soulful singers around who also plays an amazing harmonica. Salgado – a cancer survivor and one of the most well-liked musicians on the Blues circuit – has been nominated for the 2012 BMA Soul and Blues Album of the Year. www.curtissalgado.com.

Walter Trout may very well be the most popular U.S.-born guitarist in all of Europe, once placing #6 in a BBC poll voting on the best guitarists in the world. Trout’s guitar playing is high energy, soulful, and always entertaining. His new CD is Blues For The Modern Daze. www.waltertrout.com.

The Delgado Brothers and their tasty “Latin Blues” sound are big favorites on the Southern California Blues scene and were finalists at this year’s 2012 International Blues Challenge (IBC) Finals in Memphis, TN. Joining the band as Special Guest Vocalist at the Festival is another name very familiar to longtime SoCal Blues fans, silky vocalist Sherry Pruitt. www.delgadobrothers.com; www.sherrypruitt.com.

Michael John And the Bottom Line: In addition to being the Simi Valley Blues Festival’s founder, Entertainment Director and main driving force, Michael John fronts a pretty talented bunch of musicians in their own right. The group are past IBC finalists; their most recent album is Family and Friends. www.michaeljohnandthebottomline.com.