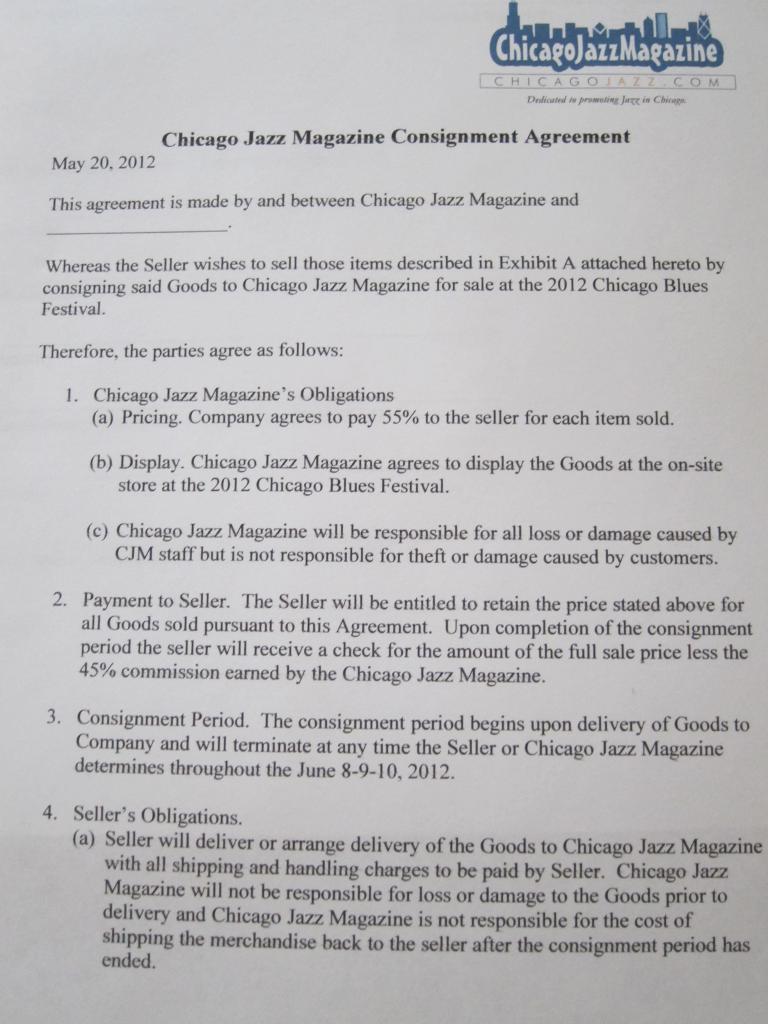 Blues fans began voicing outrage this Thursday morning as Blues411.com revealed a leaked copy of a consignment agreement from Chicago Jazz Magazine clearly showing that artists selling merchandise at the upcoming Chicago Blues Festival would be charged a 45% commission on all albums sold.

As a general example, an artist can usually purchase albums from their record label for around $5-8, and sell the album for around $15-18 at festivals and shows, earning them a small profit that can be used towards the expenses of touring. With a 45% fee, the artist could potentially make $3 or less per album sold.

Chicago Jazz Magazine was unavailable for comment at the time of this article’s release, though did recently issue a public statement citing high booth fees, insurance, employee costs, credit card processing, and other factors in necessitating a higher-than-average fee.

While the percentage commanded is abnormally high, the concerning practice is not unheard of. Some festivals who provide merchandise sales for a fe,e generally charge 20% on average, though for events such as those through music conglomerate LiveNation, fees can be as high as 35%.

In the current live music climate, with falling booking fees and more sparse live music options, merchandise sales are a key part of touring act’s survival, allowing them to make enough money to afford being on the road. Merchandise also allows artists to successfully perpetuate the all-important branding, fan support, and word-of-mouth marketing.

When presented with very high percentage fees, artists must make the difficult decision to either sell their own merchandise for, at best, almost no profit, or forego merchandising altogether. There is also the realistic worst-case-scenario that bands end up selling merchandise at a loss.

Acts that aren’t nationally known and/or those without major support behind them, have far less bargaining power when presented with these dire options. They need the large exposure provided by the festival to grow and expand their reach, but after gas, travel, and lodging expenses, merchandise is often the catalyst that allows then to get to their next destination.

Festivals, however, also need the artists. Despite being a means of gathering thousands — sometimes hundreds of thousands of people in one place for talent to play in front of, it is ultimately the artists and the music that draw the crowd, who come to be entertained.

Blues music lover’s anger exploded on social media after learning that most of potential profits, in this instance, would go to a middle-man at this festival instead of the artists who they thought they were supporting, with many crying foul on the official pages of Chicago Jazz Magazine and Chicago Blues Festival, as well as sharing tweets, messages, and emails.

Many angered fans have already vowed to purchase merchandise and albums from artist’s websites or “in parking lots” to avoid the acts having to pay the fees that many believe are gouging the hard working talent that makes the festival tick.

Update (06-01-2012): Chicago Jazz Magazine has stated that they are only selling albums, and not t-shirts. This article has been updated to reflect that.