Bluzapalooza Brings Troops a "Touch of Home" Through Blues 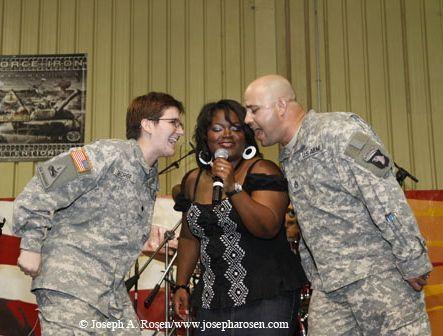 In 2007, Steve Simon saw an interview that would have a powerful impact on not only his life, but the lives of blues artists and troops serving overseas. A nineteen year old U.S. Army soldier was stationed in Baghdad. He had never been away from home, and was now in the middle of a war in Iraq — bombs exploding night and day. He spoke about why he joined the Army, about his dedication to his Army buddies, about the carnage he had witnessed and about the impact that war has had on him.

When the interviewer asked him what he missed the most he looked up and said, “just a little touch of home”.

“I could bring him a little touch of home”, thought Simon, who quickly made the decision to create what would become Bluzapalooza.

Having produced Blues concerts for many years, and serving on the Board of Directors of The Blues Foundation, Steve already knew that most of America’s blues artists were patriotic, and would do anything to bring some love “and a touch of home” to the troops.

Steve reached out to long time friends and national touring artists, asking for one to two weeks to travel to Iraq for the innagural Bluzapalooza. In the mean time, he worked with the Department of Defense, pitching his idea to bring a celebrity blues concert to the troops fighting in Iraq.

The event was something Simon was confident could be done, and as more resounding “Yes”s came pouring it, it became something he would soon be confident that they had to do. Days later, he was traveling to Washington D.C. to meet with military officers to finalize the first Bluzapalooza concert. Soon after, Janiva Magness and Bobby Rush were bringing joy, laughter, and blues music to those who were in a war zone thousands of miles from home fighting for freedom.

Since that year in 2008, Bluzapalooza has provided celebrity Blues concert tours at U.S. military bases and hospitals across the world, including bases in Iraq, Kuwait, South Korea, Japan, Italy, Egypt and even Guantanamo Bay, Cuba.

Now, with the troops being brought home from the wars, Bluzapalooza turns to blues fans everywhere to help continue it’s prestigious goal of bringing much needed joy to those that fought to keep our freedom — this time at home. Military hospitals across the U.S. are tending to the many troops that were wounded and recovering.

Although the celebrity musicians generously waive their performance fees, there are still significant costs associated with producing Bluzapalooza at each military base and military hospital. Each event requires sound, lighting, transportation, meals and housing. That’s why Bluzapalooza has started an IndieGoGo campaign to help curtail the costs of putting on shows at installations across the U.S. in 2013.

IndieGoGo is a crowd funding platform that allows enterprising individuals and companies to put up any project they desire, and fans can contribute any amount towards the cause. In exchange for different levels of contributions, there are a variety of unique items and perks that contributors get! For Bluzapalooza, that ranges from special items and opportunities such as a Commemorative military style coin, a T-Shirt, and even an opportunity to co-host a Bluzapalooza event!

The concert series has just 29 days left to reach their goal. If it’s achieved, Bluzapalooza can produce at least ten concerts, bringing happiness, blues, and hopefully healing to the troops.