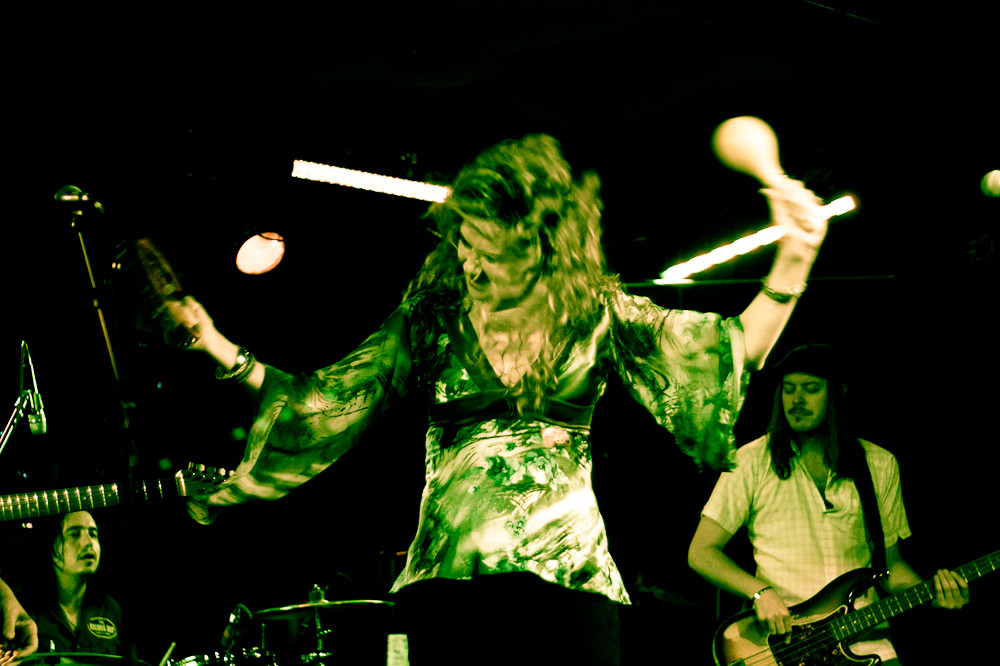 Yes, it is the Janis Joplin comparison that is hung around singers’ necks like the chains wrapped about Jacob Marley’s ghost. It demeans the artist – both the living and the dead frankly – as to be considered an artist one must be uniquely creating art that is true to one’s own soul. The worst of it is that a perpetually lazy press corps, seeing the attractively impassioned rock n’ blues singer, makes the Janis Comparative and stops there. On the other hand, while using a bit of Janis Joplin to describe one part of Dana Fuchs to you, there are many more facets to this force of nature projected as music.

Ah yes, Dana Fuchs. Dana Fuchs is indeed one of the great singers, as in Now or Ever. Her voice is unmatched for the combination of maximum power, maximum passion and masterful control. How strong is that voice? When chatting in her trailer after a performance, her guitar player and song collaborator, the great and under-rated Jon Diamond came in bearing the remains of a top quality wireless microphone that had imploded from her singing. The only other artists that come to mindf doing that was Tom Jones in his much younger days, or James Cotton with his Blues harp.

So if the Janis Jopin comparison is an unfair one, what would be fair? Let’s go with this – if Dana Fuchs and Robert Plant exchanged souls from birth across time, sex and experience it is highly likely they would have grown up to be much as we see them now. The blending would occur naturally. Each well-grounded in the Blues; each equally capable of rocking out; each capable of the soft notes that can hold a room with a whisper.

Volume isn’t everything, you know. There’s a wonderful line in Chekhov’s The Seagull where the local lawyer says (depending on which translation), ‘My voice is very loud, but unfortunately not pleasant to listen to.’ Fuchs has all the other qualities of the great singers. Let’s face it, there are as many gravelly-voiced girl singers as there are cheeseburgers in a MacDonald’s; what Dana Fuchs has is a mixture of clarity, passion and the astonishing ability to break into a softened tone with no audible corrosion from the gravel.

Beyond that of course is the physicality. Dana Fuchs is an incredibly sexual performer. It is absolutely no wonder that when Baz Luhrmann was casting the part of the Earth mother Sexy Sadie for Across the Universe that Fuchs was the chosen one, despite zero acting experience on her part. There is a certain design that stands as an ideal in North American male sexual ideals and Fuchs fits as comfortably into one of those ideal figures as you do in those jeans; those jeans that have become so accommodated to every ripple, drop and curl of your torso that like an invisible tailor they can make even you look good.

Dana Fuchs can grab any old pair of extra talls off the rack at Sam’s Club and wear them like gold. She is the great blue jean girl and the image that summons in your mind is absolutely correct. The blue jean girl: not the cocktail party girl or the library girl or the club girl or the smart and smouldering lawyer girl. No, the blue jean girl who lopes more than she walks, who talks with a sincerity that never allows a doubted thought to enter the listener’s mind, who clearly is not overly concerned with the latest offerings on the hair products aisle, for she knows that little wicked angels will toss the long dark blonde waves and curls into a pleasing form. Plus she can probably drink your sorry ass under a table and drop your sorry drunken butt on your Momma’s lawn while she drives away yelling Wooooo! That’s the blue jean girl.

Yet there is another dimension. There is also the soul-fed, soul-feeding aura of love she speaks to and projects. For there is a truth about the Blues and even the electrified Earth sounds that rock-blues fusions create: that sound is either one of two things for the artist – it is either a style or an ethos.

Dana Fuchs is utterly real both on-stage and in conversation. That implied persona is not visible. Her desire to feel and create love with her audience is equally sincere whether expressed over the microphone or over a casual glass of wine in her trailer.

On first meeting, at the Thunder Bay Blues Festival in 2011, there were hundreds of people lined up at the merch tent for Dana Fuchs’ autograph time and each and every one had to be served. Not just served with a scrawl and a smile; rather an actual moment of individual conversation. There was actual listening and involvement going on and trust me, that’s rare. It was like watching Arnold Palmer in his prime. Someone who genuinely appreciates their audience.

So there was an hour and a half wait for the interview, allowing every day pass fan to have their moment. It was admirable and a proper placement of priorities.

The first thing said to her when she came behind the large tent stage into the protective circled wagon train of artists’ trailers, volunteer mini-vans and Port-a-Potties was, ‘You know, if you’re tired we don’t have to do this.’ This was true. A daily newpaper article from the Festival had already been posted, besides which the decision was already made that Dana would be named the Performer of the Year barring God dropping down from Heaven playing Green Onions on a Hammond. Which, in case you hadn’t heard, didn’t happen. The remaining fascination was finding out if the wrenching and celebratory truth I had witnessed on-stage was real.

Oh it’s real. It’s damn real. She was asked her feelings for the audience: ‘I want the audience to feel what I’m feeling – shout and cry and laugh and stomp. That’s why I get down on my knees. I’m tall anyway and in these big shoes so I don’t want to be above them.’

From there the discussion ranged about, well, most of everything. Life, health, the then-recent death of her brother, love and passion and the whole damn thing.

What most told the story of Dana Fuchs was her discussion of the immediate post-Across the Universe period. ‘Every agent in Hollywood – every agent told me the same thing. “Stay in L.A.”’ She was movie-hot then. A tall beautiful blonde who could act and sing? It is fair judgment to say that she would have been certainly in the running for a major part in any multi-gajillion dollar budget musical made in the last decade. Her opinion though? ‘Well the “terms” were pretty simple: quit touring, leave New York and come to LA for at least a year and do nothing but audition for films. Pretty much a no brainer!’

Dana Fuchs lives life on her terms and does what she loves and where she loves it. Perhaps equally or even more popular in Europe and particularly Norway as in the U.S., as touring dates turned out she was booked into Norway within weeks of the senseless slaughter at Utoya Island where a useless little racist freak named Anders Breivik killed 59 people, mostly youths, after killing 8 people from a car bomb in Oslo. The nation was in shock and grieving. Because Dana stays in touch with her fans – not just ‘sign up for my newsletter’ touch, but real touch, she was one of the first to hear of the tragedy. ‘Wow. Many memories. Mostly getting the breaking news as it happened on BBC, then getting into the van and getting a text from my dear Norwegian friend, Oda, who lost 3 friends in the youth camp. All about 17 years old just like her. Went to the site and a memorial. Felt all too familiar since I lived only blocks away from the WTC on 9/11. ‘

So what, Dana, wha, if any differences are found between the North American audiences and European:

I always imagined there would be but honestly no! People come to shows I think hoping to get a little respite from the life’s trials and tribulations. It’s our job as performers to give it to them. If we do, they respond no matter where they’re from!

She is currently back in the studio making her new album, Bliss Avenue. So Dana, tell us about the album…

Well, the new CD is definitely going back to some of my bluesy, southern rock roots! After interviewing several producers, Jon and I decided our own vision for producing was going to give us a more sincere and authentic representation of our music. It’s a calculated risk that we had to take to stay true to ourselves and hopefully the listeners of this album will agree! I am carefully measuring my growth as an artist on this effort and hence taking more of a leadership role in producing than I ever have before. I assembled an incredible band with Shawn Pelton on drums, Jack Daley on bass, Glenn Patscha on keys, of course Jon playing his ass off on guitar. We added Tabitha Fair and Nicki Richards on background vocals and we have Tim Hatfield engineering again and co-producing with me and Jon.

I feel like the writing is perhaps a little more mature and definitely a bit darker lyrically. Lots about addiction and religion – and all of the temporary relief we try to get from suffering in a samsaric world! (Hence, the title “Bliss Ave.”). It’s not meant to be a depressing album – just a starkly honest one that I felt I had to make. Of course, with dark there is light, so I’m hoping people will understand the redemption in the pain and by no means is the music all dark and depressing…quite the contrary as often in the blues the joy forces it’s way out in the music and melody often redeems the darkness of the lyrics and song. I’m in the studio mixing all week and putting the finishing touches on this album has me excited and cautiously optimistic about delivering a piece of work that will transcend. I hope that helps frame up where I’m coming from!

As always in an interview, the last word goes to the artist; What would she like to say to the readers?:

I feel so grateful to the people who enable me to do what I love and need to do most. I am honored to get the opportunity to bring joy to people all over the world and want to be sure that everyone who comes to a show or listens to my music knows that they are a part of me. We are ALL in this f**king boat called life together! Let’s lean on each other. Music can be our holy common ground!