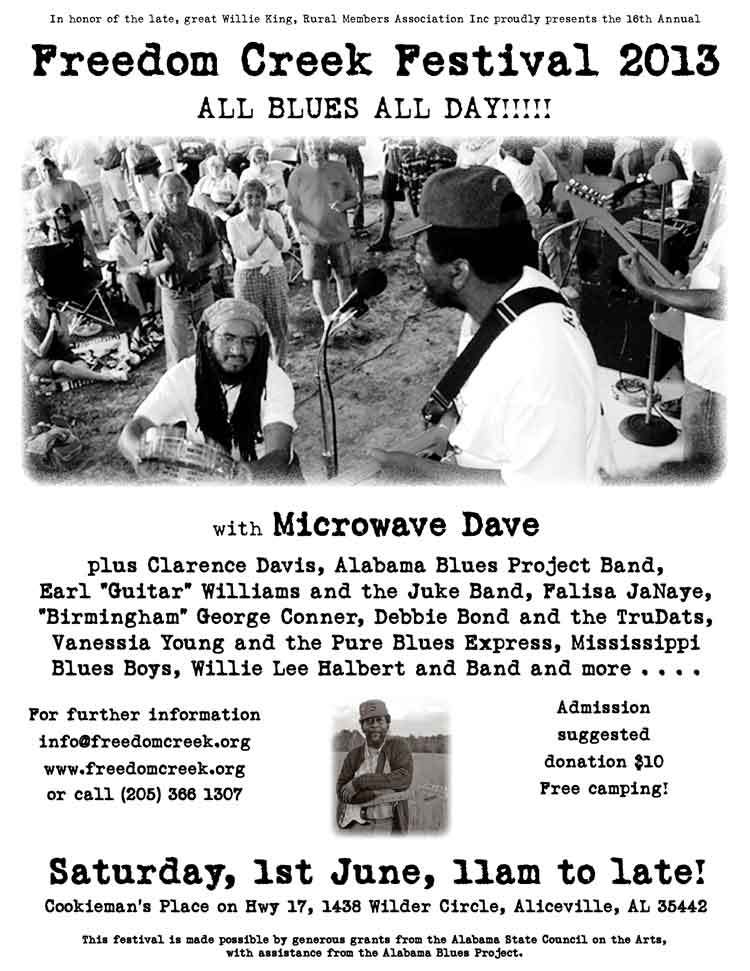 The Rural Members Association, is proud to announce the 16th Annual Freedom Creek Blues Festival in Aliceville, Alabama, founded by the late, great Willie King. This year’s festival is to be held in downtown Aliceville, in “Cookieman’s” place at 1438 Wilder Circle, rain or shine!

This internationally acclaimed festival will take place on Saturday June 1st starting at 11am, opening with a great traditional gospel group followed by non-stop blues. The family friendly festival attracts local and international crowds and is renowned for its down home atmosphere, great music and delicious southern food.

The festival will open with a prayer and gospel music, then it’s all blues all day! First up are the young musicians from the Alabama Blues Project’s Advanced student band followed by outstanding local and regional blues acts. Artists this year include prolific local bluesmen Clarence Davis, Aliceville recording artist “Birmingham” George Conner, Willie Lee Halbert who was a vocalist on all of Willie King’s CDs, Tuscaloosa blues queen Debbie Bond and much, much more!

Debbie Bond is an intrepid blues advocate, performer and founder of the non-profit Alabama Blues Project. She has been attending and performing at this festival since its inception in 1997. Bond said, “I’m thrilled that the Rural Members Association is keeping the Freedom Creek Blues Festival alive. This year’s festival includes lots of Alabama blues as well as Mississippi. I’m also happy to see so many blues women in the lineup – which isn’t always the case! The backwoods setting is in the heart of the Alabama black belt and the crowd is always a wonderful diverse mix of local, national and international visitors. This is one of the best festivals I have ever attended!”

Admissions is by suggested donation of $10. This is the most down-home, real deal blues festival around!