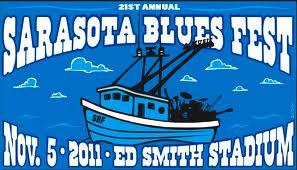 UPDATE: We have received word that the Sarasota Blues Fest WILL BE HAPPENING and they DO have a Title Sponsor!

There is nothing further to report. As news becomes available, we will update this article.

The Sarasota Blues Fest has been bringing the blues to Florida’s gulf coast for over twenty years, but this year, the event and the famous manatee that’s served as the mascot for the blues celebration is “taking the year off”.

“Thank you for your inquiries and support regarding the Festival,” started a statement on the Sarasota Blues Festival’s official website. “With great consideration we have decided to take the year off. That means unfortunately there will not be a Bluesfest in Sarasota in 2013. We appreciate your continued interest and look forward to 2014!”

In the past, Sarasota Blues Festival has hosted the likes of Buddy Guy, Gregg Allman, Ana Popovic, Trombone Shorty, and many more.

Started by the Sarasota Blues Society in 1991, the festival continued to grow in both attendance and reputation. In 2011, the festival was sold to ExtremeTix, a company that produces & tickets various events.