Today's a Good Day to get Andy Poxon’s "Tomorrow" 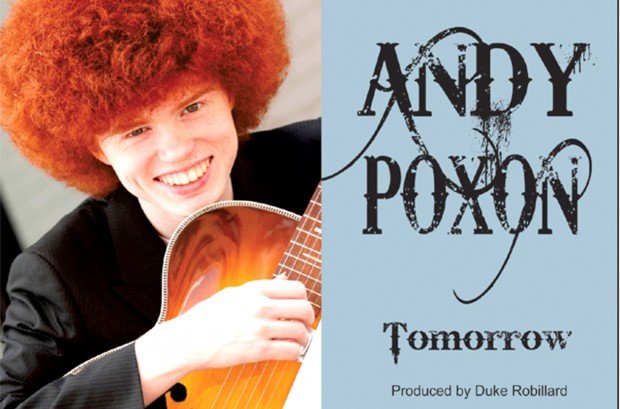 The sophomore jinx? Not on this CD, Andy Poxon’s Tomorrow on EllerSoul Records. This young man has a gift. He has talent. To quote Duke Robillard, “Andy is an extremely talented guy who really deserves the title ‘artist’ as guitarist, singer, and song writer….”

There has been evident growth since the first CD, which was very good. On this CD there is a great mix of jazz, jump, soul, and even a rockabilly shuffle tune. On this recording Andy moves from a three piece band to a four man band with the Roomful of Blues Horns joining him. Not on every song, yet I think you can see where this is going.

Duke says Andy has improved as a singer, and there’s plenty of evidence of that on this album. He can keep up with the fast tunes “You Lied” and “Fooling Around”. A song like “Why” brings out Andy’s ability to handle soul music, and on “Tomorrow” we hear his slow jazz blues skills. A particular highlight is the country sounding “One More Time”. Love it!

So in part we see Andy’s song writing skills. Delicious horn parts like on “Tomorrow”, with its muted trumpet. Cross sticking (high falootin’ drum action), a piano, and slide guitar make up the guts on “One More Time”. It’s definitely a feel of yesterday’s country music, a gem on this CD. “Why” is a song with a rhythm and blues/soul groove, with the horns, the back-up singer, and the guitar that evokes the early 60s soul era, with a short solo that melds into a sax solo. Reminders of Sam Cooke all over the place! Oh, all the songs on this album, with one exception, are written by Andy.

A short solo!? For a guitar player? If that doesn’t speak to his growth as an artist, almost nothing will. It isn’t like Andy and his chops disappear. Oh no. He appears where he needs to in the songs he writes and sings. There’s a great solo in “Too Bad”, and “You Lied” is guitar driven all the way, as is “Fooling Around”. Definitely some great licks on this CD. The closer on this CD is a jam between Andy Poxon and Duke Robillard, par excellent. It is the one song Andy didn’t write by himself. Duke wrote it with him. You’ll have to buy it to hear it. You won’t be disappointed.

There will be a lot of tomorrows for Andy Poxon. He emerges as an artist of great skill on this CD. Andy Poxon’s Tommorow: get it today!