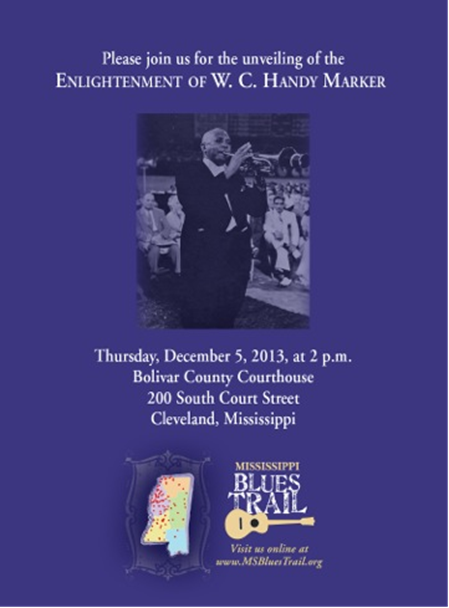 (CLEVELAND, MS) – The Mississippi Blues Trail will recognize the “Enlightenment of W.C. Handy” with the 173rd marker on the trail on Thursday, December 5, 2013. The unveiling is scheduled for 2 p.m. at the Bolivar County Courthouse at 200 South Court Street in Cleveland, Miss. On Thursday evening, the celebration continues with live entertainment at Po’ Monkey’s in Merigold, one of the last surviving juke joints located just north of Cleveland and an official stop on the Mississippi Blues Trail.

One of the most widely circulated stories in blues history is composer-musician W.C. Handy’s account of his “enlightenment” in Cleveland, Miss., c. 1903, when he witnessed a ragged local musical trio being showered with coins. In his autobiography, “Father of the Blues,” published in 1941, he described the trio’s music as “a kind of stuff that has long been associated with cane rows and levee camps.” But the Broadway hits that his orchestra of trained professional musicians performed had elicited no such monetary response from the same crowd.

“Then,” Handy wrote, “I saw the beauty of primitive music… My idea of what constitutes music was changed by the sight of that silver money cascading around the splay feet of a Mississippi string band. That night a composer was born, an American composer… I began immediately to work on this type of music.” Using what he had heard in Cleveland and elsewhere in the Delta, Handy went on to become the most acclaimed figure in publishing and popularizing blues music nationwide, famed for “St. Louis Blues,” “Memphis Blues,” “Yellow Dog Blues” and many others.

The site of the courthouse dance was honored with a State of Mississippi historical marker in 1997 and will now be celebrated again with an official Mississippi Blues Trail marker. The event will be filmed for a documentary about Handy being produced by Joanne Fish.

Research in recent years has unearthed some long-hidden information from the Handy story. Elliott Hurwitz, author of an upcoming book about Handy, shared early manuscript pages of Handy’s book with the Mississippi Blues Trail. In those pages was the name of the musician who led the trio in Cleveland. The name – which was removed from the published version of the book – was Prince McCoy. McCoy lived in Greenville at the time and in addition to performing with a trio, also led an orchestra in subsequent years that probably rivaled that of Handy’s own, performing at dances, fairs and the Ole Miss-Alabama football game that was held for the first and only time in Greenville on November 5, 1910. In the 1920s, McCoy moved to Winston-Salem, North Carolina, and died there in 1968 without ever being acknowledged in print for his role in inspiring Handy.

With over 170 markers, the Mississippi Blues Trail, a program of the Mississippi Development Authority’s Tourism Division, is a museum without walls taking visitors on a musical history journey through Mississippi and beyond. The trail started with the first official marker in Holly Ridge, the resting place of the blues guitarist Charley Patton, and winds its way to sites honoring B.B. King, Muddy Waters, Son House and others. Out-of-state markers are located in Chicago; Memphis; Los Angeles; Muscle Shoals, Alabama; Ferriday, Louisiana; Helena, Arkansas; Rockland, Maine; Grafton, Wisconsin; and Tallahassee, Florida. The first international marker was erected in Notodden, Norway in 2012.