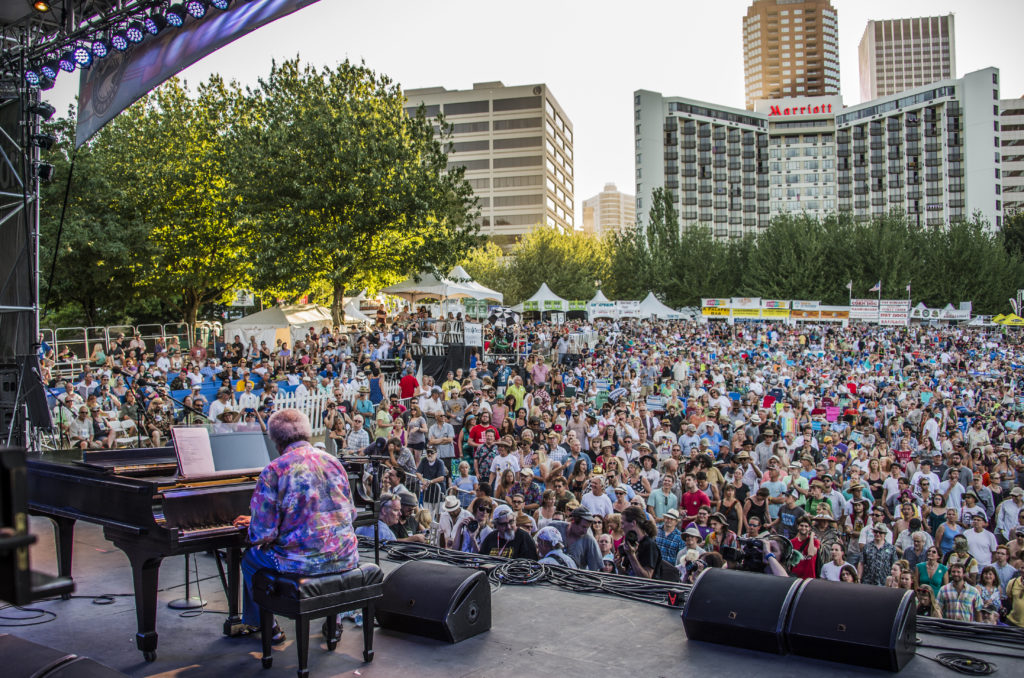 As soon as I received my coveted press credentials for the 28th Annual Safeway Waterfront Blues Festival in Portland, Oregon, I took one look at the incredibly rich and diverse list of artists scheduled to appear and knew whom my first choice would be to interview. While Allen Toussaint had been a familiar name to me, I did not fully appreciate the impact he has had on the music world in general and the New Orleans scene in particular until I binge watched all three and a half seasons of the beautiful HBO series Treme.

Allen’s music and presence is woven through many of the episodes, fittingly so for a man whose legacy will forever be inextricably woven with The City that Care Forgot. Born in the Gert Town neighborhood on January 14, 1938, his parents instilled in him a love for music from an early age. Allen had a brief run of formal piano lessons at age 9, but “the boogie woogies had me, and gospel and blues,” and he learned to play on his own instead.

When his mother bought an Emerson record player for the home, a classical music album came with it. The boy figured out how to play Grieg’s Piano Concerto as well as everything he heard on the radio. “Any time I heard a piano playing on the radio, I thought all piano players knew that except me. I felt in a hurry to grab everything I could, even some of the classics. It’s no small feat to learn the classics by ear.”

The young prodigy, mentored by Professor Longhair, grew up to become a successful recording artist, renowned composer, and producer in demand. Inducted into the Rock and Roll Hall of Fame in 1998 and the Blues Hall of Fame in 2012, President Obama awarded Allen the National Medal of Arts in 2012.

Here are a few minutes with the elegant Allen Toussaint.

Stacy Jeffress for American Blues Scene: Were you and B.B. close friends and colleagues?

Allen Toussaint: We certainly were friends and every time we’d see each other, we’d find a spot to talk. I dearly loved BB like everybody else; just a wonderful man. He had such a finality in his playing. He played fewer notes than anyone; but they meant more; he played sentences. At the [2013 New Orleans] Jazz Festival, he played, and I went on the stage and sang a couple of lines of a song I had written about him. That was the last time I saw him.

I understand that you didn’t really start touring – you were more in the studio all the time – until you and Elvis Costello had a joint project – about 2006?

Yes, it was after Katrina, and I migrated to New York. Since we had martial law, I had to leave. Elvis Costello and I had communicated and done a couple of things before then, so we were both in New York at the same time. It was time for benefits, and we did several. The byproduct of that is I’m here today. If it wasn’t for us getting together and doing those projects, I’d have stayed in my comfort zone in the studio.

I know that the Rolling Stones and Iggy Pop have covered your songs. How did they hear about you?

In talking with Elvis, he said in those early days [of the British Invasion], they latched onto many things from New Orleans, and I was “some of the stuff” from New Orleans.

Tell me about your participation in Treme.

I didn’t have much to do with it, but I was glad to be a part of that. The people who decided to do that pulled out all the stops. Of course it’s a snapshot of the whole big picture. It brought so much new, wonderful attention to New Orleans.

The festival guide said they are having a tribute to New Orleans now that it’s nearly ten years past Katrina. I read somewhere that you thought that not only was Katrina about destruction, but there were good things that might come out of it. Can you talk about that a little bit?

Wonderful things came out of it. I stayed until four days after. The morning after the hurricane, things were not functional. I saw people helping each other who normally wouldn’t speak to each other. I saw a guy who looked like a thug – I would have crossed the street if he was coming – helping a little old white lady in a wheel chair. It warmed my heart. There was a lady sitting fixing all the little girls’ hair; they were in a line. She fixed it up really nice, then next, next, next. These were people who didn’t know each other at all. There were many things like that I saw over and over again. Then I’d get the reports of how many people were reaching out to us from so far.

That, too, of course. When I did migrate to New York, there were yellow trucks outside of Juilliard, and people on the street were putting things on the trucks. Those trucks were headed to New Orleans. There were packages coming from around the world to aid New Orleans. It was a baptism.

What all did you lose personally?

My house and everything that was in it. It was interesting to go back a month later when we allowed to go back. Everything in the house was gray foam, as if you shot insulation everywhere. It was actually kind of artistic. On my piano, you couldn’t tell black keys from white. Nothing was saved except some videos that I took with me to the hotel. Since I was going to be stuck there, I thought I’d go through these with my little viewfinder and make notes so when I wanted to edit them, I would know what’s what. If I was to lose anything in my life, I would hope I wouldn’t lose that. That was the only thing that was saved, so I was happy. I’ve been carrying a video camera since I was a teenager. I used to make cartoons. I had my parents and everything in my life was on those videos.

What do you observe about the venues and opportunities for live music post Katrina?

It’s coming back very well. It’s really happening, especially the French Quarter. There are guys sitting in front of the cathedral right now with the trombone and the trumpets blasting.

The busking is going well?

It’s alive and well. I still walk around like a tourist. I’ve been there all my life and always will be.