Language of the Blues: ROLL 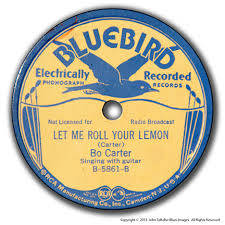 Like the word “rock,” roll was originally associated with manual labor in the Delta, specifically the rolling of heavy bales of cotton onto a ship–a job that took three men per bale and was often accompanied by call-and-response work songs. Like other expressions connected with manual labor, including rock and “hauling ashes”, rolling eventually took on a sexual connotation.

Sexually, to roll meant to heat things up and get caught in the inexorable march toward orgasm. In 1936’s “Rolling Blues,” Armenter “Bo” Chatmon (also known as Bo Carter) sang:

Bo Carter was one of the most popular bluesmen of the 1930s, due to the wicked combo of his serious guitar-picking skills (he used a variety of alternative tunings) and his cheeky sexual metaphors in such songs as “Banana in Your Fruit Basket,” “Pin in Your Cushion,” “Your Biscuits Are Big Enough for Me” and “Let Me Roll Your Lemon.”

Carter and his brothers Lonnie and Sam Chatmon also recorded as members of the Mississippi Sheiks with singer/guitarist Walter Vinson.