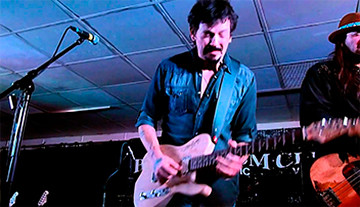 Last night, at the Tupelo Music Hall a venue in Londonderry, NH that seats about thirty patrons shy of two hundred, I was fortunate to see Mike Zito And The Wheel play for the third time.  If you’re looking for some new music and a new place to go then this is the band for you and Tupelo is the place to venture to.

At 8:10 PM Saturday, April 2nd, Mike Zito And The Wheel took the stage at Tupelo Music Hall, and proceeded to the roof off for over two and a half hours!

They played a strong set that kicked off with “Keep Coming Back,” the rocking title track to the album of the same name, which was released by Ruf Records on November 6, 2015.  Another toe tappin’ number was “Chin Up,” also off of Keep Coming Back.  After a couple of upbeat songs to start off the evening, the band took it down a notch and played “I Never Knew a Hurricane” from the Gone to Texas album from 2013. A slower pace for sure, but equally well received.

Following “Keep Coming Back,” the band played “Roll On,” a gritty tune that was featured in a season five episode ten of the FX series Sons of Anarchy.  Other tunes from the set list included “Pearl River,” the title track to his 2009 release on Electro Groove Music, Inc./Delta Groove Groove Music Inc.

About half way through the show, Zito played an acoustic set which featured “I Was Drunk” and “Get Busy Living.”  When the band came back on stage, they closed out the evening with “Bootleg,” and “The Road Never Ends.”  There were several standing ovations from the sell out crowd at this regional favorite venue, and I’m sure the band will be welcomed back with enthusiasm.

Zito, who, hails from Texas, tours regularly and has played with other blues musicians such as Tinsley Ellis, The Royal Southern Brotherhood and the very talented Samantha Fish. Zito is a master guitarist, and his vocals are a great match with his style of playing.  Next time you are looking for some new music to add to your library and playlists, check out MiKe Zito And The Wheel.  I promise you your ears will not be disappointed!

Mike Zito And The Wheel