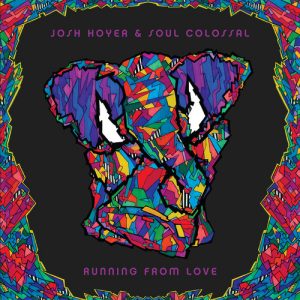 Josh Hoyer has never been accused of shying away from heavy subjects in his songs. “My guitar player wants me to write lighter music,” comments Hoyer. “He says, ‘You need some light ditties.’ I wish I was better at that.”

Instead of “light ditties,” Hoyer often addresses current issues of social justice. For example, the title song of Josh Hoyer & Soul Colossal’s 2016 release Running From Love on Silver Street Records includes the line, “I wonder if your hate keeps you up at night.” When Hoyer penned the song, the epidemic killings of black people by law enforcement officers were much on his mind. “And Trump was starting to spout his nonsense, too,” Hoyer recalls.

“The Evening Train” was inspired by the sudden deaths of several people close to Hoyer as he was composing songs for the record. “They passed away in pretty horrible ways. The song’s all about picturing one of those persons singing that song to you who is already on the other side. He’s saying, ‘You can’t explain these things that happen in life, but I’ll be on the other side waiting for you – my love’s right here.’”

Yet among the ten songs on the same record, Hoyer also has haunting tales of love such as the breath-taking “Parts of a Man” which features a mesmerizing bass line. Hoyer sings, “I was just a stranger in the dark, all the ghosts in my life had extinguished every spark. Without your love – I would just be parts of a man.” Check out the official video here. It’s another one of his songs that seems to emanate from a much earlier era. “I listen to old music,” Hoyer explains. “It probably sits there in my mind. I’m not copying the tune, but that vibe is just something that comes through; the sheer honesty that comes out of those songs. It doesn’t have to be flashy – just a solid groove with some good chords and good words.”

Hoyer and the band traveled from their home base of Lincoln, Nebraska, to Nashville to record the CD with producer Ken Coomer, who also has numerous credits as drummer (Wilco, Emmylou Harris). “We recorded in Sound Emporium, a beautiful studio.” Hoyer says he and Coomer worked well together, “I’ve worked with some producers who try to turn you into something different. Ken didn’t overstep any bounds. He took what we had and made it better.”

In addition to the usual lengthy tours to support the release and being featured at several great festivals, Hoyer & Soul Colossal opened twice for the Legendary Muscle Shoals Revue. “They’ve written some of the best soul music ever made,” he says.

In addition to Hoyer on vocals and keyboard, Hoyer & Soul Colossal is comprised of, Benny Kushner on guitars, Kennith “Memphis” Shepherd on drums, Josh Bargar on bass, Mike Dee on saxophone, and Marcus Lewis on trombone. While Hoyer composes all the parts and brings 90% of the song to the studio, he appreciates the creative contribution his band members make. “My guys are such great players that we hash out things together.”

Hoyer is looking forward to his first international tour next March in Europe. He is eager to continue demonstrating his mission of bringing people together. “I try to get through to people one opportunity at a time. We do the hard work of showing people we’re not that different.”