On April 23rd, 1940, one of the deadliest fires in American history took the lives of over 200 people when the Rhythm Club burned in Natchez, Mississippi. In 1956, Howlin’ Wolf recorded the most well known song to address the tragedy, “The Natchez Burning,” on Chess Records. On February 13th, 2016, two Natchez natives, Robert Lee “Lil Poochie” Watson and Hezekiah Early, spent a grand total of 3 hours in the studio recording, Natchez Burnin’.

This album of honest to goodness Mississippi blues, has nothing to do with the tragedy, but rather aptly describes 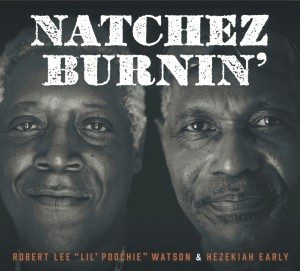 the talents of these two surviving legends. Produced by Jeff Konkel, and released on Broke & Hungry Records, the project was actually five years in the making. However, once Watson and Early got into the studios of Delta Music Institute in Cleveland, Mississippi, it was just like playing the juke joint gigs, they’ve been performing for years.

Both artists are veterans of the juke and festival circuits in Mississippi and Louisiana. Both have played with another Natchez legend, the late guitarist, Elmore Williams. While drummer, harmonica player, guitarist and vocalist, Early is steeped more in the traditional blues of the region with a touch of early rock and roll, his partner on this project, guitarist, singer, Watson, leans more toward the soul sounds of James Brown and Al Green. Together, they are a force to be reckoned with, and, fortunately for us, two of the surviving artists of a genre which is quickly disappearing.

This is a real blues record, from the place where it all began. A mixture of originals, covers and traditionals that all put the listener on the back porch of a country shack. So legitimate, you can almost smell the barbecue and hear the bug zappers.

The album begins with a couple of originals, “Got My Eyes on You,” by Watson, and Early’s,”Shooby Dooby Doo.” Watson’s guitar is tight as a drum head, and his vocals as strong as they’ve ever been. Early’s slick drumming and harmonica interludes are spot on, and they both make the transition from electric blues to early rock and roll sounds with zero effort. Their voices combine on the second track the way the congregation combines with a Sunday morning sermon.

The vocals of “Lil Poochie,” are filled with gravel and grit. Nothing showcases it better than their cover of the 1954 Chuck Willis hit, “I Feel so Bad.” Not to be outdone, Hez sings clear and low, while accompanying himself on a homemade acoustic guitar to the strains of, “Baby Please Don’t Go.” Although done more in the style of Big Joe Williams than that of Muddy Waters, this traditional blues tune is recognizable within the first few licks.

Another standout on the album is, “Ain’t That Just Like a Woman.” Watson delivers this blues shouter, a Louis Jordan, hit, with a growl to match that of a big dog, rather than a “Lil Poochie.”

As always, although most difficult here, we choose a favorite track. On this release, we’re going with the cover of Lightnin’ Hopkins‘ “Mr. Charlie.” Sans the introduction story we’ve all come to know, the song exhibits all the best of what these two artists have to offer in one song.

When you first read the liner notes, and come to know this entire project was recorded in only 3 hours, you may harbor some disbelief. When you push play, all doubts disappear, entirely. After all, these two artists from the same home town have been rehearsing for decades. This album needs to be in the collection of every blues purist and original Mississippi blues lover. That said, soul, r&b, and rock and roll aficionados are going to find their favorite sounds as well.