November 16th, marks what would have been Hubert Sumlin‘s 85th birthday. To celebrate, we offer 10 things you 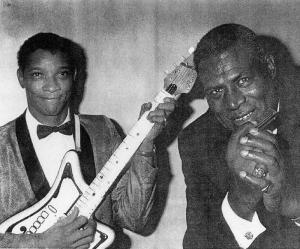 may not know about the Chicago blues guitar great.

1. His first meeting with Howlin’ Wolf – With the exception of a 6 month hiatus, Sumlin was Howlin’ Wolf’s guitarist for a total of 23 years. He joined Wolf’s band in 1954 and played with them until Wolf’s death in 1976. However, according to Sumlin, the two had first met much earlier. When Hubert was not yet a teenager, the story goes, he was standing on some crates of Coca Cola, peering into a club where Wolf was playing. Someone snatched the crates and he tumbled into the roadhouse, landing on Wolf’s head. The manager tried to throw him out, but Wolf insisted that the boy sit onstage. After the gig, Wolf drove him home and asked his mother not to punish him. Sumlin followed the big man’s career from that time on.

2. How Sumlin changed his playing style and got even better – As many southern guitar players began, Sumlin started playing a homemade version of a diddley bow, using one wire attached to the side of his house. He began playing six string guitar at the age of 6, after his mother spent an entire week’s salary of $5.00 to buy him one. He played with a pick for many years, and then one morning, just put the pick down and began playing with his fingers. He realized he was playing better than ever, with more soul, and a better sound. He never played with a pick again. Unlike artists such as Albert Collins, and Jimmy Rogers, Sumlin has never played with a capo. He thought it limited his playing and he believed he should play his instrument to its fullest. For many years, in order to achieve their signature tone, both Sumlin, and guitarist, Jody Williams, would play matching Kay guitars.

3. His time with Muddy Waters – For approximately 6 months, in 1956, Sumlin went to work with Wolf’s arch rival, Muddy Waters. Although many people thought it was because of a fight they’d had after a show, Sumlin said it was as simple as Waters offering him more money. In fact, Waters tripled what Wolf was paying him at the time. He did, however, learn quite a bit from Jimmy Rogers during his tenure. Sumlin developed his unique style by watching other guitarists, and borrowing notes and licks that he saw them play.

4. The fist fight with Wolf – Although he described his relationship with Howlin’ Wolf as that of a father and son, the two were known for having some knock down, drag out, fights. One, in particular, took place after a gig, when Sumlin had wandered off with a cute girl that had been giving him the eye all evening. When he returned, Wolf was furious at having to load Sumlin’s gear and began cursing him out in front of the band. Embarrassed, Sumlin waited for Wolf, who was much bigger than he, to turn away, then he sucker punched him. Wolf slowly turned and back-handed Sumlin with enough force to send him sprawling down the loading ramp, spitting out teeth. The next morning, Sumlin’s wife woke him and said Wolf had been sitting in his car, out front, all night. When Sumlin went outside, Wolf apologized, and gave him enough money to fix his dental work. When Wolf died in 1976, his funeral program listed Sumlin as his son.

5. Jazz influence and classical training – When Sumlin was young, he wanted to be a jazz guitarist, admiring the playing of Charlie Christian in particular. He made the switch to blues guitar after hearing artists like Charley Patton, Robert Johnson and Peetie Wheatstraw. Later he came to the realization that both Wolf and Waters had played with these legends, took what they were doing and electrified it. Not being able to read music or identify notes, Wolf sent Hubert to the Chicago Conservatory of Music. There, he studied under a teacher who played for the Chicago Symphony Orchestra. The man could play everything from blues to opera and taught Sumlin scales, as well as how to identify the notes on a piano and a guitar.

6. The London Sessions – In 1970, a Chess Records producer approached Eric Clapton and Mike Bloomfield about recording with Howlin’ Wolf. Once the deal was secured, and plans were underway to record in London, Marshall Chess did not want to pay the extra expense of sending Sumlin along. Upon hearing this news, Clapton replied, “If Hubert’s not there, I don’t record.” Chess conceded and Sumlin accompanied Wolf to London, where the album was recorded in six days. Artists including Ian Stewart, Charlie Watts, Ringo Starr, Steve Winwood, and Bill Wyman all participated and the recording went on even with Wolf receiving dialysis right in the studio. Clapton and Sumlin became fast friends during that time, with Eric even gifting Hubert one of his favorite guitars. A couple years later, at the Montreaux Jazz Festival, Sumlin gifted it back.

7. Influencing Jimi Hendrix – Much like Clapton, Jimmy Page, Jeff Beck, and Keith Richards, Jimi Hendrix often credited Sumlin as an influence to his playing. Although they only met once, in Liverpool, before ever cutting an album, Hendrix experimented a great deal with distortion. It was something that Sumlin had been helping to pioneer since the 1950s. Hubert created some of the first distortion guitar by playing his ’56 Gibson Les Paul through a combination of an early Echoplex pedal and a Wabash amp that had 15″ speakers.

8. Solo Work – After Wolf’s death, Sumlin played with the remaining members of his band, dubbed The Wolf Pack, for four more years. He moved from Chicago for a while and spent time in Texas, where he left an impression on two young guitar slingers, Jimmie and Stevie Ray Vaughan. He had actually begun recording solo albums as far back as 1964, but released 14 more after 1980, with his last being, About Them Shoes, on the Tone-Cool label in 2004. It was that year, that he had a lung removed, but still played and recorded whenever possible, including guest appearances on recordings with JW-Jones, and Elliot Sharp. Winning several BMA awards, he was nominated for 4 Grammy Awards as well, and was placed 43rd in a 2011 Rolling Stone poll of the 100 Greatest Guitarists of All Time. 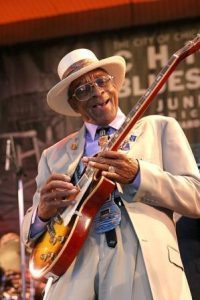 9. Final performances – One of Hubert Sumlin’s last performances was his appearance in the documentary film, Take Me to the River. Released in 2014, much of the footage was recorded on earlier dates, including a portion of the film depicting Sumlin giving lessons on his note bursts and cliff hanger breaks to fellow guitarists, Eric Gales, and Ian Siegal. A recognized master, Hubert mentored the two artists at the St. Blues Guitar Workshop in Memphis, Tennessee, using as his catalyst, the epic Delta blues standard, “Sitting on Top of the World.” His final recordings, just 13 days before his death in 2011, were for the album, Cracking the Code, by Stephen Dale Petit. Petit traveled to New Jersey to cut the session, where Sumlin overdubbed guitar on the song, “Get You Off.” Sumlin’s death on December 4th, both shook and inspired Petit. He gathered other guest musicians including Dr. John, Chris Barber and Mick Taylor to join him on a track titled, “Hubert’s Blues.” In tribute to Sumlin, “HCS 4eva” (Hubert Charles Sumlin) is etched into the run out groove of all vinyl copies of the album.

10. Last request – For the last 10 years of his life, Sumlin called Totowa, New Jersey, home. After the death of his wife in 1999, he moved in with his manager and caretaker, Toni Ann Mamary. Among her many duties to the Blues Hall of Famer, was to fulfill his last request. She did just that, when lying on his death bed, Sumlin turned to her and asked for his guitar.