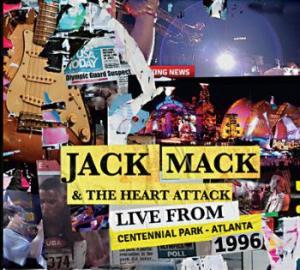 Known and loved around the globe for being the “Hardest Working Band In Soul Business,” little did the band members of Jack Mack & The Heart Attack realize how well-earned that moniker had become.

It’s July 1996 and the band is engaged to perform at the XXVI Olympiad, the international multi-sport event being held in Atlanta, Georgia. As the band closed their set and performed their original tune, “I Walked Alone” in the early morning of 27 July, a pipe bomb exploded in very close proximity to the stage directly killing 1 person and injuring 111. The white noise aftermath of the bomb blast provides a stark backdrop to what could be the first time an act of domestic terrorism closed a live recording.

Resurrected from the ashes of that ill-fated event,the world finally gets to hear a recording of one of the greatest party bands ever to rock the house – Live From Centennial Park, Atlanta 1996 from Jack Mack & The Heart Attack. The album is released in conjunction with the new film Richard Jewell from Clint Eastwood and Warner Brothers (releasing December 13, 2019 in the USA). Playing out like the syllabus of a master class, the 11-song set details the prime elements needed to be a successful working dance band, which is precisely how they earned the moniker “the hardest working band in soul business” for 40 years. The high energy sound of five original tunes and six perfectly timed R&B and soul classics are designed to showcase each member of the band and ignite the crowd into a dancing frenzy.

In stark contrast to the unfolding tragedy, this set was recorded live for nearly 40,000 party goers to capture the energy of a high-octane band during a party extravaganza. Soulful vocals, a rock-and-soul rhythm section, and blazing horns tear up that hot and humid night in Atlanta that only an explosion could stop.  This collection of originals and classic soul covers places the listener smack in the middle of one of the world’s greatest parties that ends with a seminal and historic moment in American and Olympics history.

Alvino Bennett kicks off the primeval funk groove of ‘(We Got) More Soul’ with bass man Tim Scott and guitarist Andrew Kastner and John Paruolo on Hammond B3 falling in behind. The mighty Heart Attack horns of Lester Lovitt on trumpet and Bill Bergman on sax join in on the East Bay soul prototype first recorded by Dyke and the Blazers in 1968. They then deliver a message of social consciousness on a rousing dance beat for the first original tune, ‘Breaking Down The Walls.’ Broadcasting the simple message “given love, every child will grow strong,” vocalist TC Moses sings the praises of the fairer sex on the steamy R&B track, ‘A Woman Thing.’

The stirring performance of the Staples Singer’s standard, ‘I’ll Take You There,’ is the first of two songs chosen to be featured in the new film. Their extended version features a call out for solos on keys, guitar and bass, before the horns build up the big ending. The ultra-funky, ‘Something About Ya,’ makes its debut in the set that was later recorded on their 1999 studio album Arrhythmia and features dramatic interplay between the drums and horns. Saxophonist Bill Bergman and guitarist Andrew Kastner each take an extended solo on the Stax Records hit ‘Respect Yourself.’

No soul party would be complete without a James Brown track, and the band complies with a faithful and fun-loving rundown of ‘Sex Machine’ somehow fitting the Olympic Theme into the mix. The guitar driven, ’Living It Up,’ from their 1990 album, Jack It Up, surely kept the crowd on its feet. They dig deep into Reverend Al Green’s anthem ‘Take Me To The River‘ before blazing through an incredible 12-minute medley of Sly and the Family Stone classics moving seamlessly through the hits including ‘Simple Song,’ ‘Stand,’ ‘I Want To Thank You,’ and ‘I Want To Take You Higher.’ The group then debuted another original song, ‘I Walked Alone,’ which will also be included in the movie. Ovations for the sweet R&B love song reminiscent of those by Bobby “Blue” Bland, are cut short by the senseless bomb blast that cuts off the recording.

Some 40,000 people attended the Olympiad party on a sultry night in July. Let us hope that they will remember the blessing of music and joy delivered by Jack Mack & The Heart Attack above and beyond the tragedy that cut short their dynamic performance.