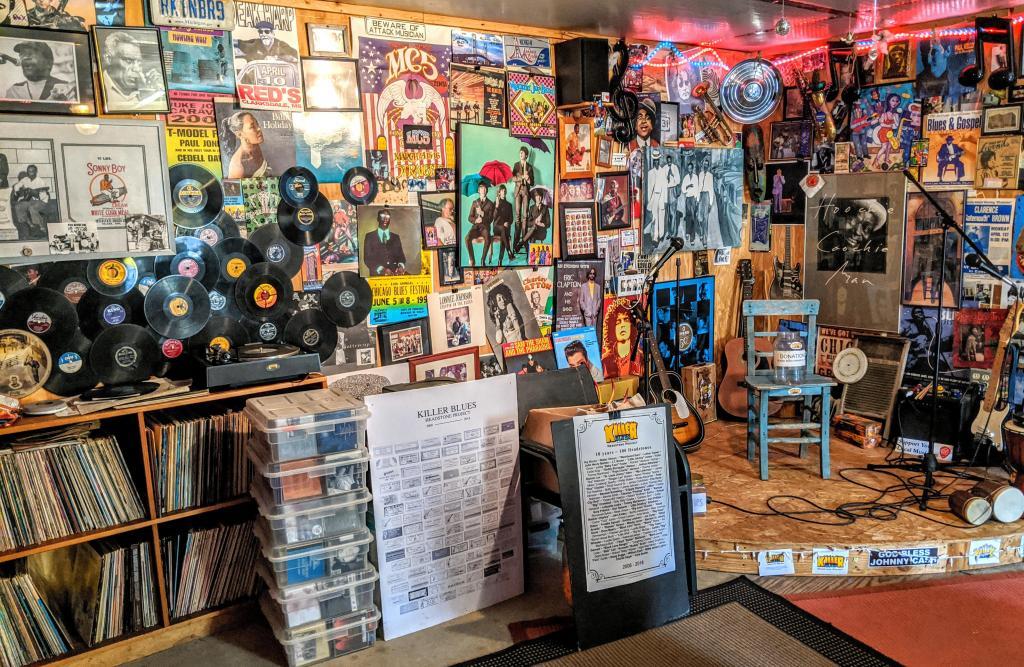 Steven Salter created Killer Blues in 1995 after spending time helping out Billie Thomas at Tant Enterprises, a distributor of Folk, Blues, and independent labels in Montague, Michigan. Soon Billie invited Steve to assist him at festivals selling Jazz, Folk, and Blues CDs. “It wasn’t long before I decided to branch off on my own and service a niche market focusing on Blues only.”

It was a fateful road trip to the New Orleans Jazz and Heritage Festival in 1997 that the Killer Blues Headstone Project was born. On his way Steve decided to stop at a couple of cemeteries in Chicago. He was greatly shocked to find many Blues artists didn’t have markers on their graves. Steve immediately began working to place headstones. In 2009, The Killer Blues Headstone Project became non-profit. He has placed over 120 headstones including: Mississippi John Hurt, Washboard Sam (Robert Brown), Grant Green, Roosevelt Sykes, Eddie King, Luther Tucker, and William “PA’ Rainey.

How did you get the idea to provide headstones for Blues artists with unmarked graves?

It started with a road trip in 1997. I made the decision to take a road trip to the New Orleans Jazz and Heritage Festival. I live in Western Michigan and I did research on Blues locations that I wanted to check out on my way down. A number of them were in Chicago area cemeteries. These were artists I never saw live so I thought I would stop by and pay my respects. The very first one I went to was Muddy Waters’ grave. When I arrived I found a flat one foot by two foot stone on the ground and I was flabbergasted. I couldn’t believe that someone so huge had a marker that was so small. I went on to another cemetery where Howlin’ Wolf was buried and he had a fairly substantial one. I thought this is more like it. Howlin’ Wolf is my all-time favorite Blues artist. I then went to where Otis Spann was buried. I went to the cemetery office and received a location card. I went to the area and looked and looked and couldn’t find anything. I went back to the office because I couldn’t find the stone. They told me he didn’t have one. I couldn’t believe someone like Otis Spann who had such a huge impact on Blues didn’t have a marker. I went to the festival and it bothered me. In 1998 I wrote a letter to Blues Review Magazine and said, ‘Otis is in an unmarked grave, this is terrible, let’s do something.’ People from all over the world saw it and the magazine started a fund. They took care of getting the marker. In 1999 a marker was placed for him. That’s how it started.

How many more unmarked graves are out there? Is it endless?

I am working on a list right now of about forty people. I know where they are buried and I know they don’t have a marker. I have an equal size list of people I am trying to find. First you have to find the grave site to know whether or not there is a marker. I have at least forty there. When doing research if there is a name that I haven’t come across before I do a little more research, I see if I can find where they are. Whenever I find family I love that very much. On average the artists have been gone for twenty years before we get to them. Some have been gone longer so we cannot find family. We always would love to find family. I am working with a family right now on a stone. As to how many more are out there, I don’t have a clue. I’m sure there are plenty.

Who’s your favorite artist you have created a headstone for?

That would be the very first one the headstone project provided: Big Maceo Merriweather. He was a huge influence on Otis Spann. He’s the very first one and he’s buried in Michigan where I’m from. I searched his location for four years before I found him. It took me two years of working with the cemetery to get the stone. That was my first one and I didn’t really know what I was doing. I have since become very adept at doing this.

Throughout the years the gravestones have come from a number of places. When I was first doing this I didn’t know what I was doing and I would use the cemetery because they were always more than happy to sell you a stone. They sold them at an inflated price. Currently I use a company called West Memorials out of Memphis Tennessee. They give us great prices as we are a non-profit. They support us in that measure. There’s a unique story behind every single stone.

Who are your favorite Blues artists in general?

My favorite Blues artists are the Pre-War guys. The term now is inner war years. Charlie Patton, Son House, and the acoustic guys. Also, Sonny Boy Williamson number one. The very early ones are my go to favorites. I like them all.

Can you talk about the Killer Blues garage and the painting outside?

That started as a vision in my head. I saw a photo of a West Virginia general store with people sitting on a porch and I thought I would love to have a painting of Blues guys sitting on that porch. I looked around and tried to find an artist that could do that for me and low and behold an artist lived right behind my house. I asked her if she could paint the photo for me. I gave her the original photo of the general store and I gave her photos of all the Blues musicians I wanted on that porch. She actually painted it. The original is a two foot by three foot acrylic and it hangs in my living room. I took that to my local place and they blew it up for me on vinyl. The one that’s up now is the second copy. The first copy we put up in 2008 and it faded to black and white. I had the photo on a disk and had another one printed out. They last about five years. We offer a poster board copy. The painting is called “Blues in Me” and you can purchase it.

Where do you see your organization going in the next 5-10 years?

I want to find as many people with unmarked graves and I want to take of them. I am hoping that we can find many more that need to be found and acknowledged. I have a database of over sixteen hundred Blues musicians that we have documented where they are buried and whether or not they have markers. At some point I would like to run out of people that need markers. I don’t think I will. We are also working on a booklet. It’s a guide to Blues musicians buried in the Chicago area. I know Chicago is a tourist center and a lot of people go there for Blues history. This will give them a source to pay their respects. One other thing I’d like to add is there are five people in the organization besides myself and no one receives any compensation for what we do. This is a labor of love. It is my way of giving back for all the joy I’ve received from listening to the music. It’s a way to honor and acknowledge the artists that created it. It is my hope the project will inspire others to find ways to give back and make this world a better place.

Purchase The Blues in Me and more