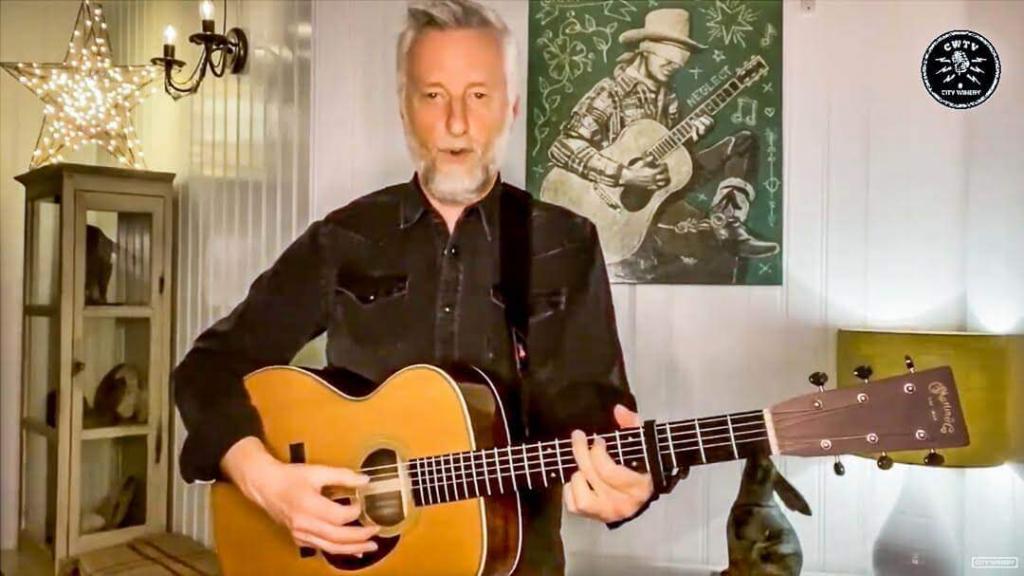 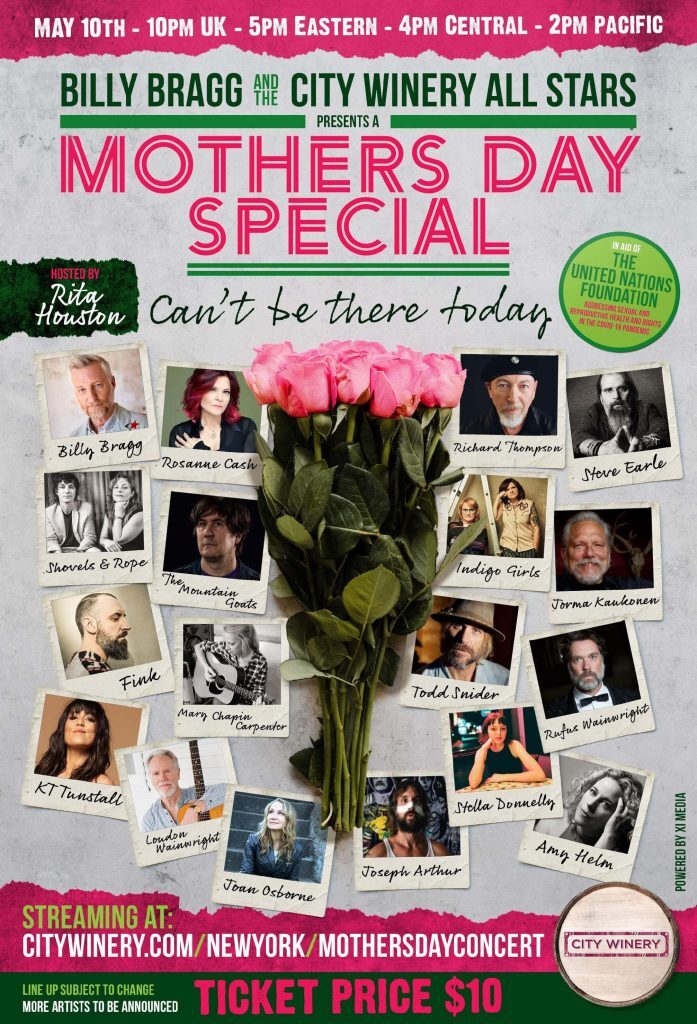 Billy Bragg and The City Winery All-Stars co-produced a multi-artist concert broadcast on YouTube this past Mother’s Day, May 10.  The special event honored mothers everywhere with 100% of net ticket proceeds being donated to the United Nations Foundation fund addressing sexual and reproductive health and rights during the COVID-19 pandemic. Bragg commenced the show with “I Can’t Be There Today,” the song that inspired City Winery to put on the Mother’s Day benefit.

The concert was hosted by WFUV’s Rita Houston, who introduced the artists before they played one to three songs each.

Rosanne Cash kicked things off with “Sunken Lands,” musing upon her grandma picking cotton in the sunken lands of Arkansas. With husband John Leventhal supporting on guitar, Cash mentioned that she hopes she possesses the same kind of tenacity her grandmother did, and that tenacity is what will carry us through this, together, alone.

Joan Osborne sang Dylan’s “Buckets of Rain,” doing her best to channel one of her heroes in her own lovely acoustic pop kind of way. Loudon Wainwright III cut an unconventional figure while declaring, “Yes, these are my pajamas.” He then went right into “White Winos,” a song jocosely recollecting, “Mother liked her white wines / She’d have a glass or three / And we’d sit out on the screen porch / White winos mom and me.” Ever the guttural singer and satirist, Loudon roared an emphatic rendition of Tom Lehrer’s “Oedipus Rex” on the ukulele.

Todd Snider, the “troubadour from Nashville by way of Portland,” performed a hopped-up “Hoochie Coochie Man,” the Muddy Waters classic. He also dedicated “Enjoy Yourself” to his mom since she taught it to him. Mary Chapin Carpenter was indeed music to my ears as she sounds the same as she did in 1990. She sang and strummed “Late For Your Life,” a song of hers that her mother always liked.

Richard Thompson went back in the 1975 vault with “Heart Needs a Home.” Andrew Bird wished his mom well by singing a song she used to sing to him at breakfast. The indie violinist is a one-man orchestra, and no doubt enthralled a virtual audience with his pizzicato and airy singing/whistling. KT Tunstall further elevated the mood by doing an unexpected acoustic rendition of Jackson Five’s “I Want You Back,” before segueing into her famous “Black Horse and Cherry Tree.” 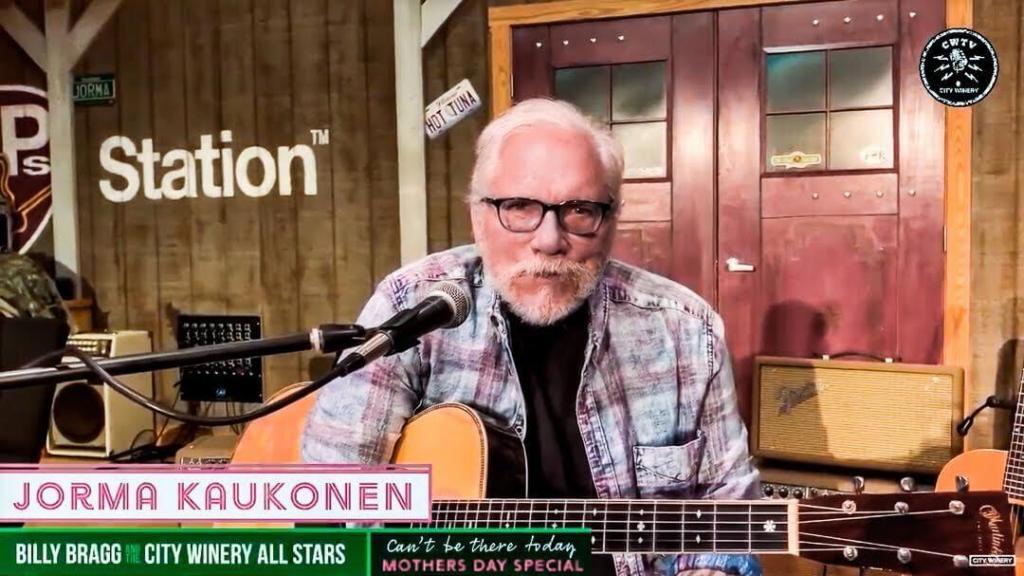 And then we see Jorma Kaukonen up on stage at his Fur Peace Ranch. Jorma prefaces by making sure all the mothers out there watching feel appreciated. “What would we be without you?” He lovingly reflects on his mother’s determining role in his upbringing. She was a Den Mother in Cub Scouts, taught him how to drive, bought all his records when he made it as a working musician — as she never dreamt of taking a giveaway. “All you moms out there who wiped our noses, cut our food, sat with us when we were sick, waited at the bus, let us go when it was our time, and then wept silently. Thank you for all you did and all you continue to do.” I’m not crying. You’re crying! And then, of course, what better song to follow that special moment than his “I Am the Light of This World”?

Cut to Amy Helm live at Levon Helm Studios singing a song she wrote for Mother’s Day called “Sing to Me,” in which she expresses, “Voices resound / Love comes back around.” In keeping with the brilliant humor of the night’s event, she does the anthem of all mother anthems: The Coasters’ “Yakety Yak.” Amy adds soul to catchy hooks the same way her father always did.

John Darnielle from The Mountain Goats professed his love for Billy Bragg, voicing that he initially considered doing Bragg’s “Waiting For The Great Leap Forward,” but he decided against making him “sit and listen to someone else cover his tune.” John realized his songs share a common thread with Billy’s in their diction and forcefulness, as well as songs about where one comes from and the nature of love. So he decided on a fervent  presentation of The Mountain Goats’ “Love Cuts The Strings.”

Steve Earle confessed all the mama songs in his arsenal “come from a ‘Mama Tried’ kind of place.” His go-to on Mother’s Day? “The Devil’s Right Hand,” a cautioning plea from mother to son about the road a pistol will take you down. Stella Donnelly said Happy Mother’s Day to her mom from New South Wales to Western Australia, and proceeded to play “Season’s Greetings” as it features a shout out to her mom in the second verse. Donnelly conveys family quirks on holidays through colorful language and an ethereal voice.

Husband-wife folk duo Shovels & Rope did “Hammer” and “This Ride,” a short set featuring some nice banjo picking. Joseph Arthur sang an unreleased song called “The Movies” about stars from a bygone era, hoping mothers could relate. I’m sure a lot of them would love to go to the movies again with their sons or daughters. Then Stephin Merritt of The Magnetic Fields did a fan favorite, “The Day The Politicians Died.”

Clad in a robe of blue and white, another member of the Wainwright dynasty, Rufus, graced the livestream. He reminded that his new album, Unfollow the Rules, is out July 10. He pointed out that Billy Bragg had done his own version of “Heart Like a Wheel,” which was written by his aunt, Anna McGarrigle — also made famous by his mom and aunt, so he related that to Mother’s Day. Rufus played a song from his new album called “Peaceful Afternoon” that called to mind Jackson Browne in its timbre. He continued on his piano, stating he didn’t know whether to do a Mother’s Day song or a political song because, well, it’s Billy. Rufus admires Billy’s human rights activism so much that he chose the latter. We are at a critical juncture where it “needs to be brought to the fore.” So he did his own “Going to a Town,” expressing disappointment in the current administration.

We then see Valerie June in a field where she puts her own remarkable spin on The Spinners’ “Sadie,” mixing soft soul with unique jazz phrasing. She’s proud to be named after her mother, June Kay, and emphasized that every day is Mother’s Day. Hamilton Leithauser performed “The Garbage Men” with all four of his little girls singing backup, and the Indigo Girls followed with their celebrated “Closer to Fine.”

Billy returns to the screen to close out the show. He thanks the host, the artists, the production team at City Winery, and the audience. In addition to their virtual fundraising efforts, City Winery team members across the country have stepped up to help give back to communities during coronavirus, from delivering hundreds of meals to first responders and healthcare heroes to providing family meals to their fellow employees.

Bragg offers words of comfort during a time when quiet can be the most disquieting thing one can experience. The silver lining for him, “on the small scale and large scale, are people coming together to express social solidarity.” He keeps his faith and believes in humanity, because he’s witnessed it during the pandemic. He’s committed to his work which ensures social solidarity carries on. Because we will be together again, sing together again. He makes his exit, naturally, with a heartening “I Keep Faith.”