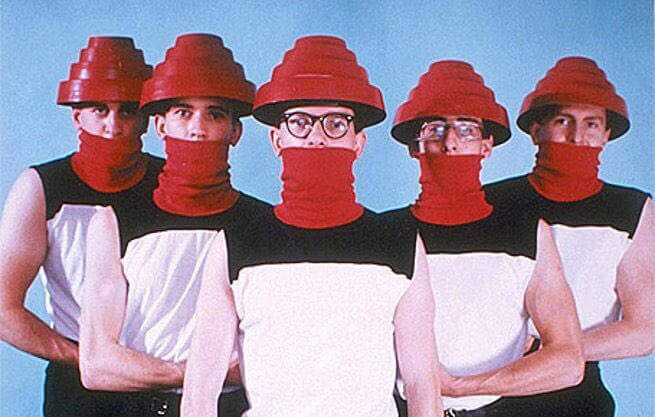 Devo have unveiled the PPE version of their iconic red Energy Dome, and I have an “Uncontrollable Urge” to wear one. The Energy Dome face shield is now available for pre-order, alongside cloth masks.

The Energy Dome helmets, as well as Tyvek costumes, were first worn by Devo on their 1980 Freedom of Choice tour.  Many frontline workers are still facing a shortage of protective equipment globally, and Devo is helping to protect in this way. The refashioned dome also arrives as part of the original’s 40th anniversary.

Gerald Casale made this statement:

It’s the 40th anniversary of DEVO’s Energy Dome – a DEVO icon that is often as misunderstood as the band itself. Although they have been mistaken for flower pots, dog bowls, car urinals, lampshades, and eventually relegated specifically for the use at holiday parties, these holy totems were actually designed with a more important purpose in mind.

It was designed according to the ancient ziggurat mound proportions used in votive worship. Like the mounds it collects energy and recirculates it.

In this case the Dome collects energy that escapes from the crown of the human head and pushes it back into the medulla oblongata for increased mental energy.

It’s very important that you acquire a plastic hard hat liner adjusted to your head size and fix it with duct tape or super glue to the inside of the dump. This allows the Dome to float just about the cranium and thus do its job. Unfortunately, sans hard hat liner the recirculation of energy will not occur!