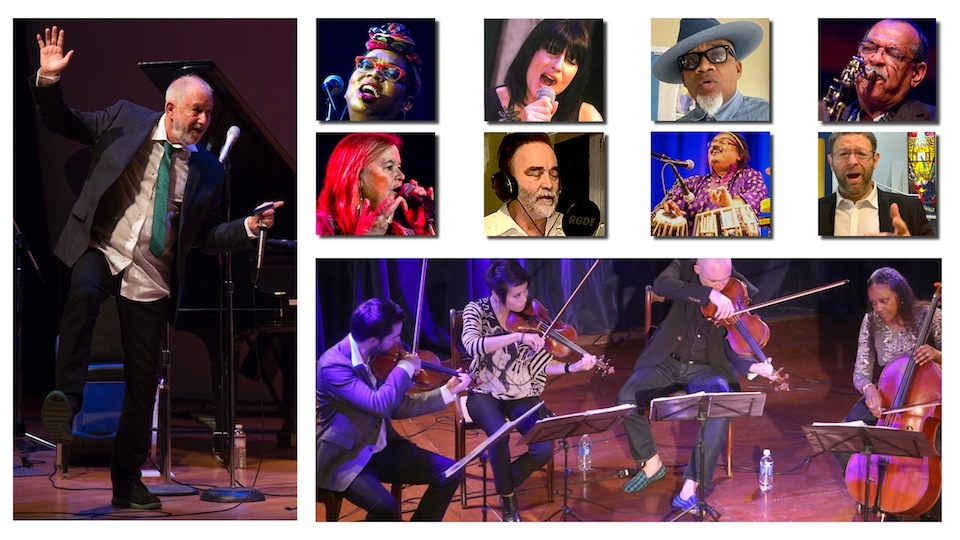 Corky Siegel is known internationally as one of the worlds great blues harmonica players,  singer-songwriter, and the sole pioneer/composer of award-winning revolutionary works that weave blues and classical forms together. Co-founder of the Siegel-Schwall Band, and Blues Hall of Fame Inductee, Corky Siegel has a catalogue of recordings on RCA, Vanguard, Alligator, and million selling blues/classical recordings on the iconic classical label Deutsche Grammophon.

His close associations with the blues masters in the earlier days of Chicago blues, his essential part in the blues rock revolution, and his surprising success in bringing together blues and classical audiences make him a pivotal (though stealth) figure in modern music history.  We now introduce his latest and most ambitious run with the muse. EXTRAVAGANZA is a 100 minute audio/visual adventure that infuses additional flavors into the framework of the apposing forces of blues and classical.  But that’s not all.

The whole approach to the production is based on the psychology that has come about due to the damndemic and the result of Mother Nature sending us to our rooms. Music itself is in the form of compassion considering all it does to unify, uplift, and heal.  But the need for companionship for the big hug is why I felt it was necessary to welcome the viewer personally, one on one, into our individual spaces and allow them to welcome us into their homes. This is also why I express in this presentation the advantages of this format and why this could not be replicated on stage and why we call this; closer than in-person.’ And people have responded so enthusiastically not only to the presentation but to this very concept by commenting: ‘this is even better than a live concert.’ – Corky Siegel

Imagine you are welcomed right into Blues legend Corky Siegel’s room, looking down directly over his shoulder as his fingers dance gingerly over piano keys. You can get so close to the stellar string players that you need to quickly duck their swift bows akimbo as they each invite you into their individual spaces. Travel with Jazz saxophone icon Ernie Watts from his home in California south of Big Sur, to the Taj Mahal as his haunting song ‘Oasis’ evokes images of the East, or walk a mountainous flower strewn path in Hawaii with Frank Orrall as he sings longingly his poetic vision of Maui in ‘Little Blossoms.’ These are some of the images in the intimate journey that awaits in a closer-than-in-person experience with Corky Siegel’s Chamber Blues with special guests: Two-time Grammy winner Jazz titan, saxophonist Ernie Watts considered the  ‘best in the business at the top of his game,’ vocal divas with ‘wow factor,’ Marcella Detroit (Eric Clapton, Elton John, Shakespears Sister)  City Winery favorite, Lynne Jordan, Aretha Franklin’s favorite percussionist, Kalyan Pathak on tabla, popular Poi Dog Pondering’s Frank Orrall with some much needed poetry for the day,  Alligator Records Blues star Toronzo Cannon, internationally renown Cantor Pavel Roytman, and two-time Grammy nominated country blues gospel singer Tracy Nelson (Duets with Willie Nelson ‘After the Fire.’)  singing her hit; ‘Down So Low.’  You are cordially invited into each of their homes, and it all happens right here, in the comfort of your own home. – Holly Siegel

For years Corky has been calling everyone on his mailing list; “Cousin” because he experiences a vivid “oneness” with humanity. In this same spirit, when the pandemic arrived, he felt a calling and he began his “free – no ask,” twice-a-week live streams to reach out and hug his fans. He’s been called “Mr. Rogers for adults,” with thematic music and stories in the 30 to 45 minute live streams – followed by a one-hour Zoom.

The presentations are called “Life’s Dream” and he is now at this writing at number 94. With this same understanding he has created this magnum production, EXTRAVAGANZA, with the help of his wife Holly (now director and iPhone 12 cinematographer), his Chamber Blues ensemble and his special guests. Each of the other 12 artists sent in their brilliant and joyful content (as their own directors, recordists and cinematographers). And then Corky, with his 50 years of experience making music and bringing together blues and classical – attacked the “learning curve ball” of Final Cut Pro, the film editing software, and spent 5 months putting it all together – not for an audience – but for you.

It should be noted that while recording these videos, all the audio was recorded on top-quality equipment, because 8 of these works will be part of the next album project More Different Voices which is a follow up to his ground-breaking 2017 album, Different Voices. (Participate? Corkstarter Fund)

As Corky explains, “A great deal of focus went into understanding the psychology created by the damndemic (as we call it). Mother Nature has sent us to our rooms to be creative and answer the call to look at ‘streaming video in the pandemic’ as a new art-form bringing people close up companionship with the music makers and a behind the scenes feel for the production welcoming people into our individual spaces while they welcome us into their individual homes.”

“Chamber Blues: Few can claim to have forged an entirely original genre of music, but in 1966, Corky Siegel did just that. Guiding the blues of Howlin’ Wolf and Muddy Waters out of the smoky cavern of Big John’s and onto the stages of the Chicago Symphony, New York Philharmonic and beyond, the harmonica-playing mad scientist had the tuxedo-and-gown crowd on its feet, clamoring for more of this blues-classical alchemy. These days, the harmonica virtuoso and composer is continent-hopping with Indian percussion and string quartet in Corky Siegel’s Chamber Blues, continuing to bring classical and blues fans shoulder-to-shoulder…and obliterating musical categorization in the process.” – Doyle Armbrust

The EXTRAVAGANZA, livestreamed from the City Winery in Chicago takes place on March 6th, at 8 PM (ET), 7 PM (Central). RSVP for the 100-minute show. Recommended donation $30 but any amount will be appreciated by the whole team.