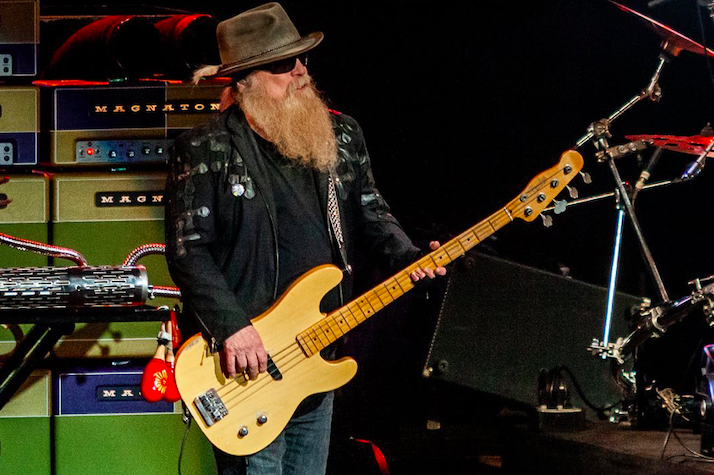 “I been up, I been down. Take my word, my way around,” were the first lyrics I ever heard sung by ZZ Top bassist Dusty Hill. The song was “Tush,” from the album Fandango! And the year was 1975.

This was not my first brush with the “Little Ole Band From Texas,” as the airwaves were previously permeated in my home state of Arizona with songs like “Just Got Paid,” “Waitin’ for the Bus,” “Jesus Just Left Chicago,” and “La Grange.” Dusty had provided the “bottom of the top,” for these and several other songs, but it was Fandango! that changed my perception of the band and their niche in my musical world.

As I’ve stated before, my love for the blues came by my taking the long way around the barn as it were. Artists such as The Allman Brothers, Eric Clapton, Janis Joplin, The Rolling Stones, Paul Butterfield, Canned Heat, Robin Trower, Lynyrd Skynyrd and Foghat introduced me to the blues before I even realized it. My nerdish reading of every word in their albums’ liner notes led me to Chicago, the Mississippi Delta and, of course, Texas. That’s where I found ZZ Top, and songs that I was able to relate to is a simple, hard-driving way. “Mexican Blackbird,” “Beer Drinkers & Hell Raisers,” “Heard it on the X,” and “Party on the Patio” became personal anthems. At the bottom of them all, was the constant foundation of Hill.

Born Joseph Michael Hill on May 19th, 1949 in Dallas, Texas, Dusty Hill was already playing bass with his brother John “Rocky” Hill in local Dallas bands by the age of 13. He learned by playing the blues, thrown to the wolves as the adage goes.

I kind of learned how to play on stage and whatnot, and embarrassment is a great motivator. If you don’t play well, standing up there with lights on it really stands out, so it behooves you to get your shit up pretty quick.

By 1969, the Hill brothers parted ways musically. Rocky wanted to play more straight blues, which he went on to do with artists including John Lee Hooker, Lightnin’ Hopkins, Freddie King, and Jimmy Reed. Dusty, along with drummer Frank Beard wanted their music to “rock” a bit more so they relocated to Houston where they joined Billy Gibbons in a newly formed ZZ Top, releasing their first single, “Salt Lick,” that same year.

Throughout his career with ZZ Top, Dusty Hill provided bass, keyboards, back-up and lead vocals, and his humorous songwriting talent. If you haven’t already recognized it, the band’s songs are filled with innuendo and double-entendre. Their amplified Texas blues sound is instantly recognizable, even when their musical format changed a bit with the onset of the 1980s.

They didn’t go overboard with a new wave sound, but did adjust to the MTV market with songs like “Sharp Dressed Man,” “Legs,” “Gimme All Your Lovin’,” and the ballad-esque “Rough Boy.”

Though he credited Jack Bruce and Stanley Clarke as earlier influences, Hill lived by the KISS (Keep It Simple Stupid) method of bass playing. He was a precise, masterful mechanic of the 4-string, but was never the “star” of the show.

Someone once asked me to describe my tone, and I said it was like farting in a trash can. What I meant is it’s raw, but you’ve got to have the tone in there.

I put his talent along the same lines as David Crosby in Crosby, Stills, and Nash. What I mean by that is Dusty may not be the first thing one notices about a ZZ Top song, but if he wasn’t there, he would surely be missed.

Dusty Hill had been up and down in his life. During the band’s 3 year hiatus in the late 70s, he worked at the Dallas airport. Like any true blues man, Hill carried a pistol, which accidentally discharged when it fell out of his boot, shooting him in the abdomen in 1984. In 2000 he was diagnosed with hepatitis C causing the cancellation of ZZ Top’s European Tour that year. But in 2002, he married longtime girlfriend Charleen McCrory and fathered a daughter. Just 2 years later as a member of ZZ Top, Dusty Hill was inducted into the Rock and Roll Hall of Fame.

On the afternoon of July 28th, bandmates Gibbons and Beard posted the following on the band’s Facebook page:

We are saddened by the news today that our Compadre, Dusty Hill, has passed away in his sleep at home in Houston, TX. We, along with legions of ZZ Top fans around the world, will miss your steadfast presence, your good nature and enduring commitment to providing that monumental bottom to the ‘Top’. We will forever be connected to that “Blues Shuffle in C.”

You will be missed greatly, amigo.

At the age of 72, Dusty Hill has shuffled off this mortal coil, and although his spirit has left Texas, it is surely bound for the Pearly Gates.
*ZZ Top continues to tour with long time guitar tech Elwood Francis taking over the bottom as per Hill’s wishes.
Dusty Hill Phil Solomonson Rick Scuteri ZZ Top
Share. Facebook Twitter Pinterest LinkedIn Tumblr Email WhatsApp
Previous ArticleChicago’s Neal Francis Is On The Move
Next Article Jimmie Vaughan To Release 5-CD Box Set In September