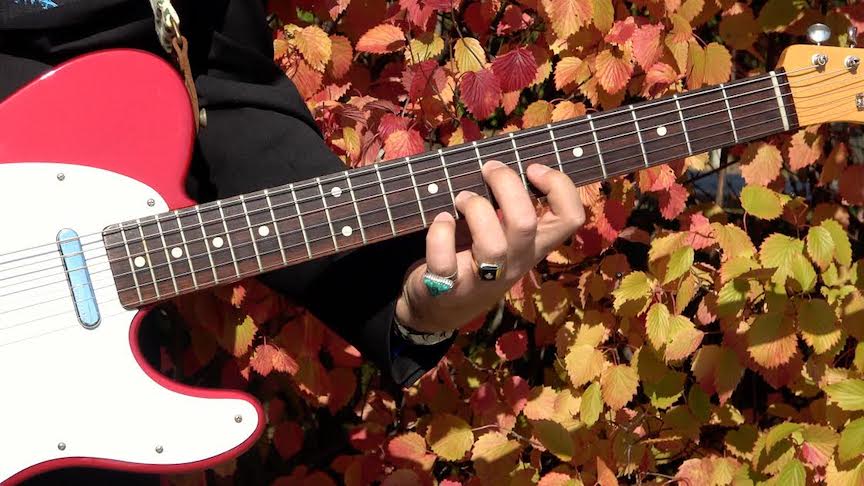 Brant Buckley is a Berklee College of Music graduate with a Bachelors of Music in Songwriting. Born outside of Chicago (Hinsdale), he lived in Costa Rica and spent most of his life in Philadelphia. East coast folk music and the coffeehouse scene inspired his early sound: James Taylor, Bob Dylan, Neil Young, Kenn Kweder, and Nick Drake. In 2012, Buckley independently released his first album, My Life, which was featured in The Times of India (India’s CNN). In 2015, he released Chicago Summer, a three-song EP. His song Shine has over 55,000 YouTube plays. April 1st 2021, he released his single Don’t Shoot Your Blues Away getting radio airplay on Uncle Buc Plays The Blues Show. May 11th 2021, he released his second full length album: Times Strange. His song “Nerve Damage Blues” has been featured on The Monster Blues Show and Mystical Muddy Man on Visual FM Serious Internet Radio.

Buckley’s Chicago Blues inspired sound is melodic, rhythmic, and haunting. He pulls heavily from his folk and spiritual background and there are hints of Muddy Waters, Robert Johnson, and Son House. He is all about the power of song. In addition, Brant is a certified USPTA tennis professional and has been practicing meditation (Kriya Yoga) and energetic healing for over 10 years. As a contributing author for The American Blues Scene, Brant has over 60 published interviews/reviews. He’s interviewed George Thorogood, Bobby Rush, John Hammond, John Primer, Dick Waterman and Walter Trout. 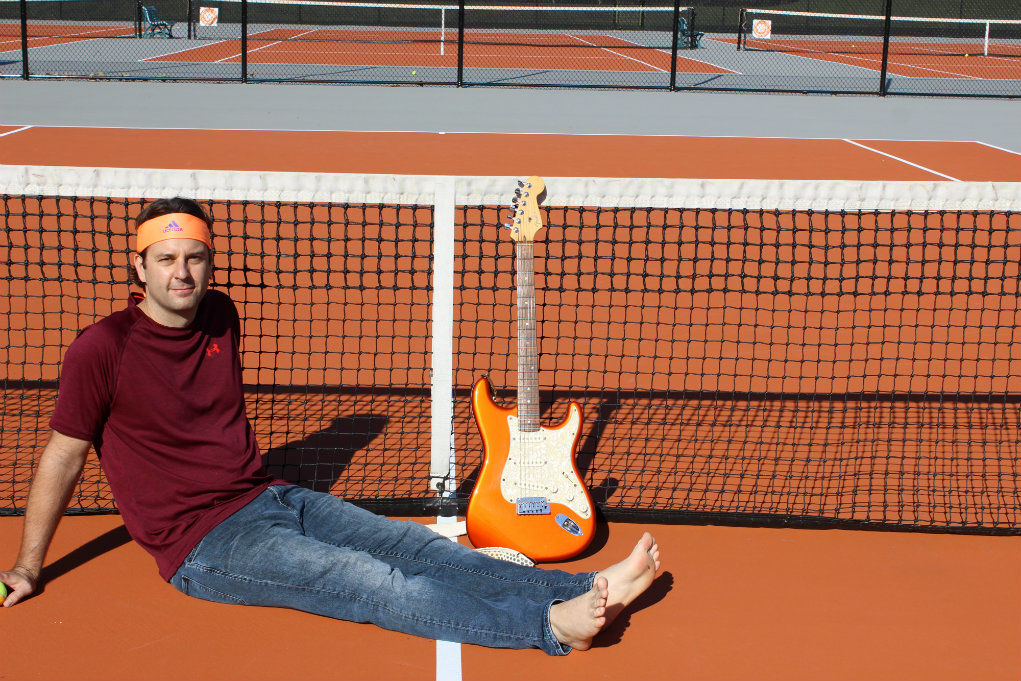 As a guitar teacher, I use twelve bar Blues to teach creativity to students. The student learns how to drop their mind, let go, and play creatively and freely. They learn how to really play and feel music and enter a musical trance or zone like state. No matter your student’s musical ability, this state can be achieved. For every skill level, I recommend applying the minor pentatonic scale with its respective twelve bar Blues backing track. Through working with scales, you can teach creativity through phrasing, dynamics, and playing with feel and emotion. Creativity can also be taught through chord construction. These teachings and techniques can be applied to all instruments.

With any beginner or advanced student, I recommend starting in the key of A. The three chords used in an A Blues are (A7, D7, E7). In my opinion, they are the easiest shapes to play out of any of the keys as they are laid out in such a way on the guitar that transferring between chords feels good. Also, the A minor pentatonic scale in root position is located in a nice spot (on the low E string 5th fret). For the more advanced student, you may want to ask how many 7th chord shapes they know, encompassing the entire guitar neck as well as minor pentatonic modal scale shapes. Remember that scale shapes are like training wheels; they are tools used to learn and eventually you will think less in shapes to eventually see the overall guitar. The twelve bar Blues consists of the following twelve bar chord progression (notice there are twelve chords, hence the name twelve bar Blues):

If a music student is brand new or a beginner, I recommend showing them the basic A minor pentatonic scale shape in root position that starts on that fifth fret of the low E string. If your student is more experienced and advanced, find out how many minor pentatonic scale shapes they know. If the student is really advanced, find out if they can play the shapes vertically on the strings. The box shapes are more horizontal than vertical as the notes move across the fretboard. Go to YouTube and pull up a twelve-bar Blues backing track in the key of A, or if you want to use a twelve-bar recording that you have created, that will work too. For beginners, slow Blues tempos may be a better option and medium or fast tempos for the more advanced student. First, you may want to see your student play the scales up and down with the backing track. They can do this in any way they choose and in any rhythm. Their ears will notice the scales go along and musically how the sound fits together and merges.

After this, you can start teaching creativity. No matter what the student’s level is, ask the student to play along in any way they want with the backing track. Give them complete freedom. They can hit any note they want in the A minor pentatonic scale, can shift any way they want, can stay on any note for as long as they want, and can hit it as many times as they want. Basically, there are no rules and the student is free to experiment with the scale being played with the backing track music. You will find that creativity automatically happens and the student will feel like they are playing music. For the new and or beginner student after they do this, they are usually very excited as they are tapping into their inner creativity.

You can even start teaching the student basic phrase ideas: little easy riffs within the A minor pentatonic scale. Once they learn a few easy riffs have them play along with the backing track again in any way they want incorporating the riffs. It doesn’t have to be exact by any means and after the student goes through a few more run throughs, you can isolate one of the strings, usually the high e string. Have your student close their eyes or not look at the guitar. You want to get them focusing on really feeling and hearing the backing track. They can than play the two notes in any way they see fit with the backing track. This is a great way for the students to lose themselves in the music, have complete creative freedom, and drop their thinking mind.

Getting a collection of riffs and phrases is like having a lick library. Beginners won’t have the framework and will need help understanding how to take the scale to find licks and riffs. Give them simple riffs that are on one to three strings at most. Intermediate students may know a few box shapes/patterns and a fair number of licks. Another creative pentatonic scale exercise with more advanced students involves playing the licks they know in multiple box shapes. Have them play the same riff in different octaves that correlate to the other modal pentatonic shapes. Blues soloing is all about repetition, and once they learn the licks in multiple box shapes have them play it with the twelve-bar backing track.

By playing the riffs in different octaves they will start to see different and new creative patterns in the other box shapes that will spark even more licks. They will start to see how you can creatively improvise in different box shapes and how learning the same riff in a new box shape will automatically get them creating new ideas within that box shape. For the highly advanced student, see if they can construct a whole solo together from the start to finish over three repetitions of the twelve bar Blues backing track: thirty-six bars of total music. You can set creative goals for each twelve-bar section. Maybe you shoot for a certain emotion/feel in the first repetition, a different emotion in the second, and for the third you combine emotions up an octave to create a new dynamic.

Creativity can also be taught through dynamics and feel. Dynamics are how loud and soft notes are hit. Feel translates into emotion. You can teach your students dynamics by having them play notes with the backing track at different volumes. Try having your student take the volume down so low to where they can barely hear the strings. On the other end of the spectrum have them really hit the strings hard. You give them creative freedom. Tell them to mix in playing dynamics so they are playing the pentatonic scale at different sound levels, not playing in a straight line. Ultimately it is up to your student to choose.

Another way to spark creativity is playing with feel. Ask your students how they are feeling. How would their feelings translate into notes within the A minor pentatonic scale? Which notes would they play and how would they play them? For example, anger is an easy emotion to spot and to mimic. You can show your students how anger may be translated onto your instrument. You may hit your notes a lot harder with more vibrato creating loud piercing dynamics that mimics frustration. There is no right or wrong with how the emotion comes out. This is another great way for your students to experience emotional freedom and get whatever they are feeling out through their instrument.

In addition, creativity can be taught through chord construction which consists of learning the individual notes that make up seventh chords. A seventh chord equals 1, 3, 5, and b7. For example, A7 is made up of the following notes: A, C#, E, and G. D7 is made up of D, F#, A, and C. E7 is made up of E, G#, B, and D. The strongest values of a seventh chord are the third and flat seventh degrees. The weakest value is the fifth degree. Students can create unique seventh chords that aren’t standard shapes. If a student is still learning the fretboard, I recommend a printed-out fretboard with guitar notes. They can create shapes visually with a chart and test their chords to the backing track. For example, a standard A7 shape consists of the open A string, index finger on the seventh fret of the D string (A note), ring finger on the ninth fret of the G string (E note), middle finger on the eighth fret of the B string (G note), and the pinky finger on the ninth fret of the high E string (C# note). For my song “Nerve Damage Blues” I created an A7 chord consisting of the following notes: A, A, C#, G, C#.

Creativity really can be taught through the assistance of a twelve bar Blues backing track and its related minor pentatonic scale. Creativity is all about imagination and the unexpected. Your students will come up with unique ways to play the minor pentatonic scale through the use of phrasing, dynamics, and feel/emotion. Again, creativity can be taught through chord construction. Teaching creativity will help your students formulate and come up with new ideas and the opportunities are endless.