'Get On Board: The Songs of Sonny Terry and Brownie McGhee' out now on Nonesuch Records 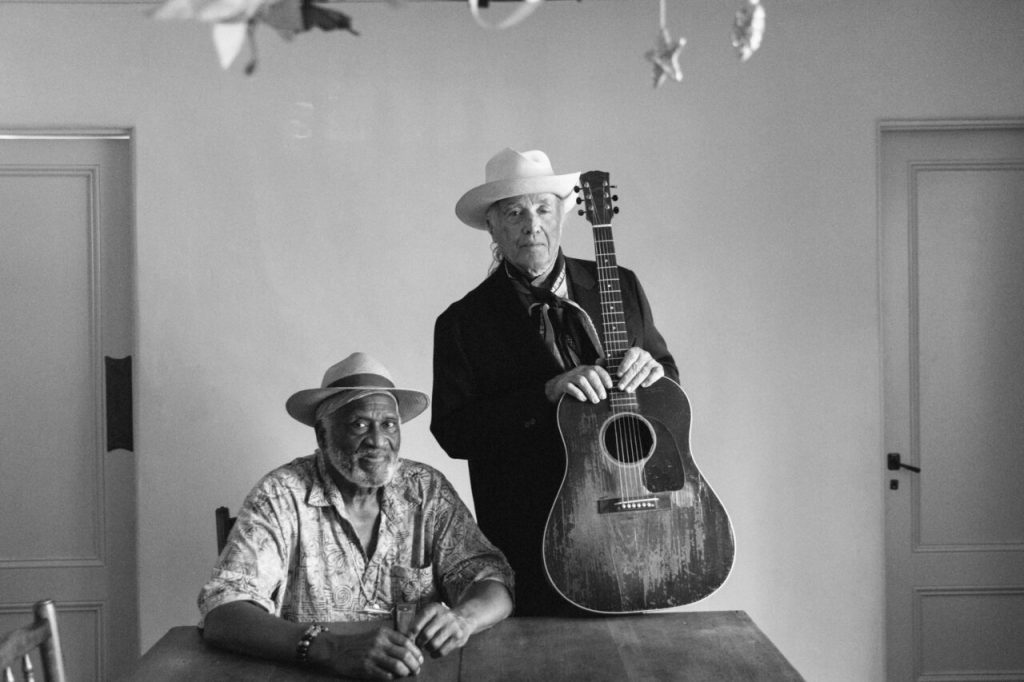 Nearly sixty years after they first played together, Ry Cooder and Taj Mahal, longtime friends and collaborators, reunite with an album of music from two Piedmont blues masters who have inspired them all their lives: Get On Board: The Songs of Sonny Terry & Brownie McGhee.

With Taj Mahal on vocals, harmonica, guitar, and piano and Cooder on vocals, guitar, mandolin, and banjo—joined by Joachim Cooder on drums and bass—the duo recorded eleven songs drawn from recordings and live performances by Terry and McGhee, who they both first heard as teenagers in California.

Explaining where Terry and McGhee took him musically, Cooder says, “Down the road, away from Santa Monica. Where everything was good. ‘I have got to get out of here,’ was all I could think. What do you do, fourteen, eighteen years old? I was trapped. But that first record, Get on Board, the 10” on Folkways, was so wonderful, I could understand the guitar playing.”

Mahal adds, “I started hearing them when I was about nineteen, and I wanted to go to these coffee houses, ‘cause I heard that these old guys were playing. I knew that there was a river out there somewhere that I could get into, and once I got in it, I’d be all right. They brought the whole package for me.”

Taj Mahal and Ry Cooder originally joined forces in 1965, forming The Rising Sons when Cooder was just seventeen. The band was signed to Columbia Records but an album was not released and the group disbanded a year later. The 1960s recording sessions, widely bootlegged, were finally issued officially in 1992. Cooder then played on Taj Mahal’s 1968 self-titled solo debut album. Get On Board is their first recording together since then.

Harmonica player Sonny Terry and guitarist Brownie McGhee, both originally from the southeastern United States, had active solo careers as well as collaborating with some of the most celebrated musicians of their time. But they were best known for their forty-five-year partnership, which began in 1939 and included mesmerizing live performances around the world and numerous acclaimed recordings.

Their Piedmont blues style became popular during the folk music revival of the 1940s and ’50s, centered in New York City’s flourishing club scene for jazz, boogie-woogie, blues and folk music. Terry and McGhee traveled in the same circles as Woody Guthrie, Pete Seeger, Leadbelly, and Josh White, among others in a rich mix of writers, actors and musicians. As a new generation emerging in the 1960’s drew inspiration from folk and blues, Terry and McGhee toured the world as the foremost exponents of the acoustic music of the Piedmont. They were named National Heritage Fellows in 1982 in recognition of their distinctive musical contributions and accomplishments.

“You got the south on steroids, when you got the music of the south, the culture of the south, the beauty of the south, through Brownie and Sonny,” Taj Mahal says. He describes McGhee as a “solid rhythm player. To really play behind the harp like that. He would set stuff up. He wasn’t making many notes. Sonny had all the notes, running around. But Brownie, he laid it down.” Cooder adds: “This thing of squeezing the thumb and first finger and a little bit of the second finger, which I still do. I’d forgotten where it came from. That’s what Brownie did. I saw him do that and said, ‘I think I can do that.’”

Mahal calls Terry “a wizard harmonica player.” Cooder says, “Sonny had incredible rhythm for one thing. Making sounds with his voice and the harmonica so you couldn’t tell quite which was which. He was good at that.”

“We’ve been doing this a while,” Cooder says. “Perhaps we’ve earned the right to bring it back.” Mahal concludes. “We’re now the guys that we aspired toward when we were starting out. Here we are now … old timers. What a great opportunity, to really come full circle.”

Purchase Get On Board