Pure acoustic Bobs premiere the video for "Blessings and Blues" from forthcoming album 'So Far,' out June 17 via VizzTone! 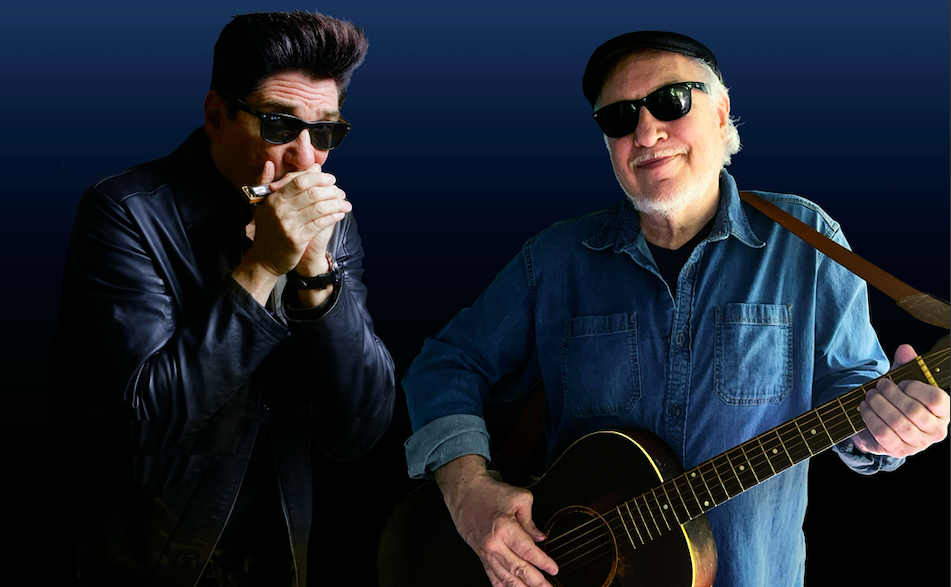 Singer-songwriter/guitarist Bob Margolin and harmonica player Bob Corritore are collaborating as an acoustic duo for the first time on the album So Far. The two met back when Corritore saw Margolin playing in Muddy Waters’ band at his high school in 1974. Both have pursued their rightful places in the upper echelon of the blues firmament since, and it seems like this partnership was a long time coming.

Margolin was born in Boston in 1949, played in local rock and blues bands until he was hired by Muddy Waters in 1973. He spent seven years at Muddy’s right side, playing on Grammy-winning albums and star-studded shows including Martin Scorcese’s classic film of The Band’s farewell concert experience, The Last Waltz. In 1980, he started touring with his own band and doing special shows and guest appearances with many well-known artists from the rock and blues worlds. Bob released his own albums on Powerhouse Records, Alligator, Blind Pig, and Steady Rollin’/VizzTone, (of which he is a founding partner).

He produced and performed on albums for countless Blues artists and produced and consulted on Muddy Waters reissues for the Blue Sky label (Sony/Legacy). Margolin appeared at a Kennedy Center tribute, scripted and appeared in instructional videos for Hal Leonard Publishing, and wrote and released the e-Book, Steady Rollin’. He has played on several Grammy-winning recordings, won numerous W.C. Handy Blues Music Awards for his playing and producing, and is a Keeping The Blues Alive Award recipient for Journalism. Bob appeared in and toured with the star-studded “Last Waltz Tour” productions led by Warren Haynes in 2017 and 2019, which are currently gearing up for 2022. Margolin tours constantly, all over the world, wherever his road takes him.

Corritore was born in Chicago in 1956, and heard Muddy Waters on the radio at age 12, an event which changed his life forever. Within a year he was playing harmonica and collecting blues albums. He saw blues shows in his early teens, and cut his teeth sitting in on Maxwell Street until he was old enough to get in the clubs. He hung around great harp players such as Big Walter Horton, Little Mack Simmons, Louis Myers and Junior Wells, and received harmonica tips and encouragement from many of them. He became friends with many blues veterans, working with many of them in the late ‘70s and ‘80s, and going into the studio to produce some classic albums. In 1981 Bob ventured southwest to live in Phoenix, Arizona, where he was soon joined by Chicagoland friend Louisiana Red.

Corritore started his still-running Blues radio show in 1984, and in 1991 opened the now famous Blues and Roots Concert club, The Rhythm Room. In 1999 Bob released his first CD as a national recording artist. His many albums have now been released on Hightone, Blue Witch, and Delta Groove, and digging into his vast vault of recordings, Bob has released 10 albums since 2018 through his own Southwest Musical Arts Foundation in affiliation with VizzTone. Bob’s work has garnered a Keeping The Blues Alive Award, Blues Music Award, Living Blues Award, and Blues 411 Jimi Award. Bob remains very active with his own releases as well as numerous guest appearances on others’ albums. He performs regularly across the country and around the world with numerous projects. Bob has also become well known for organizing multi-artist showcase sets and events featuring traditional blues artists.

Jimmy Vivino has always considered himself “A blues man with a job.” Although best known for serving 26 years as Conan O’Brien’s musical director, guitarist and bandleader, his experience in the music business predates that by 20 plus years.

He has produced, led bands and recorded with a countless number of rock and roll and blues artists for five decades, including the likes of Hubert Sumlin, Warren Haynes, Bob Weir, Keith Richards, Elvis Costello, Johnnie Johnson, Son Seals, Shemekia Copeland, Levon Helm, Phoebe Snow, Dion, Laura Nyro, Bob Margolin, Lowell Fulson, John Sebastian, Joe Louis Walker and All Kooper, to name a few. When not producing, recording or touring with other artists, he still tours the country and the world with his own band and is due to release a new blues album later on this year (2022).

With no rhythm section or electric instruments, we are proud to present pure acoustic Bobs raining down their “Blessings and Blues.” It’s a song of bitter and sweet, played on acoustic slide and acoustic harp that enhances with rhythm and tone.

Enjoy the video premiere below!