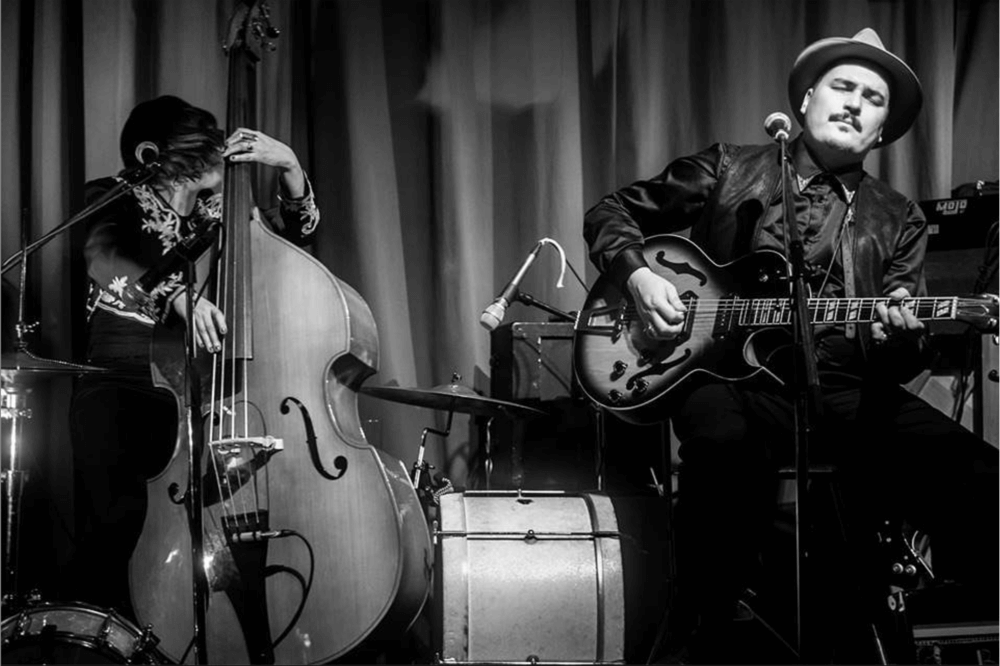 To say A.W. and Jasmine are old souls is an understatement to say the least. They are poised for worldwide recognition in an amazing genre-bending ride through American blues and folk, gypsy jazz, Native American themes, jump blues, swing and more.

These century-old traditions have been redefined and delivered in a new light here. They are astounding in their depth, groove and soul on this recording. Written, played, and recorded here in a heartfelt and natural old-school way for the world to hear, feel, dance, drink or be alone with.

For me, working with them in the studio was inspiring and a re-confirmation of my own belief in the power of roots music. Special thanks go out to Afterlife Studios, with their long history of great recordings and real echo chambers, vintage gear, and great engineer Erik Nielsen, who converged magically with all these musicians to make some damn memorable music.

Blue Moon Marquee writes and performs original compositions influenced by anything that swings, jumps or grooves.

Colette not only commands the upright bass, but also brings the rhythm with her feet on a custom foot drum kit, all while singing in her signature honey-dipped tones.

Cardinal’s distinctive and soulful vocals barrel out like a raging bull, while his guitar crackles with the swinging energy of jazz-tinged blues.

The result of nine years of rigorous touring, crisscrossing Europe and North America is a distinct energy and style from this acclaimed duo. Carving a path through blues, jazz, jump jive, folk, country, swing and Indigenous soul with an authentic spirit, their sound does not idle easily in one certain category. It stomps and struts through the wilds, conjuring a blend where Howlin’ Wolf tangos with Django, Earnest Tubb shoots firecrackers with Cab Calloway, and Memphis Minnie throws dice with Screamin’ Jay Hawkins.

Their gift is bringing all these elements together without anything sounding out of step. They collect the roots and smoothly braid them with lyrics that often touch on the underbelly of society, woven with elements of Indigenous storytelling and poetic cadence.

With their highly-anticipated 5th album Scream, Holler & Howl, Blue Moon Marquee have captured their most sophisticated collection of songs yet. Recorded live to tape, SHH blazes forward with a full band featuring some of Canada’s finest veteran players.

The vast repertoire of this band is a reflection of bounteous years on the road, experiencing life through a wide diversity of lenses. The result is their trademark blend that pulls the different parts of their musical worlds together, taking the tones of early blues, the expressions of jazz, the heart of country, the spirit of folk, the swagger of soul and the rhythm of roll. The way Colette’s velvet tones lift Cardinal’s mystique is something that enthralls audiences from backroom bars to festival stages.

Unbound by genre or era, Blue Moon Marquee has an edge that demands you take notice. With an authentic mixture of tempo, melody and imagery, they are timeless artists perfect for this time.