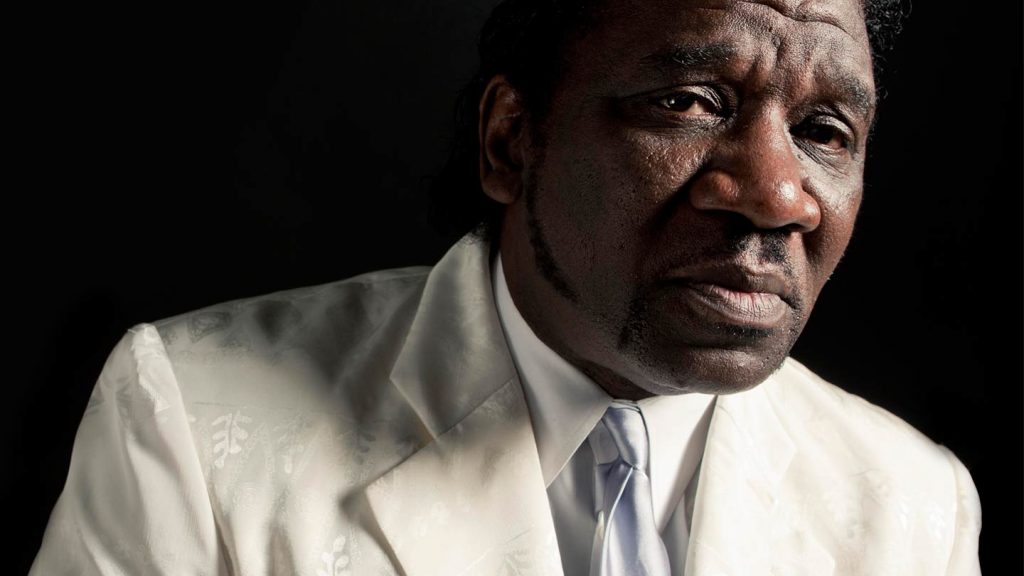 The lowdown is that most of the songs on Portrait were previously released by Morganfield on his album Son of the Seventh Son on the Severn imprint. Since his signing with Delmark, they added two previously unreleased on CD songs, re-mastered the entire project, track by track, and presented it to the world. The result? Marvelous modern blues with exceptionally deep Chicago roots.

The first track, “Praise Him,” was arranged by “Studebaker”John Grimaldi, and recorded in 2021 at Joyride Studios in Chicago by Blaise Barton. It starts the CD out nicely, with a Mud Morganfield penned gospel tune, demonstrating his advancement in songwriting over the years. Mud handles the bass and vocals on “Praise Him” with Rick Kreher and Mike Wheeler on guitars; Cameron Lewis on drums and percussion; Luca Chiellini on keyboards; and Felicia Collins, Shantina Lowe, and Demetrius Hall providing choir vocals.

In 2018, American Blues Scene‘s Barry Kerzner wrote, “It’s hard when you are the son of blues royalty. It’s even harder when you are the son of Muddy Waters. No matter how hard you try, you’re never going to be Muddy Waters. So, you have to forge your own path and build your own reputation with your own work. Mud Morganfield has done just that. This soft-spoken, humble man has grown into a giant talent in recent years.”

Morganfield continues to forge his own path in Chicago blues, with his famous father never too far from his mind.

I remember as a kid, my dad used to buy me a set of drums. I played drums for like eight years, starting when I was seven, and he always made sure I had a new set, because the first couple I tore up. But I think maybe even tapping on my mother’s stomach, I come here with these music notes running through my head. I got scolded lots of times for beating on furniture, like the sides of dressers, but I had to get that stuff out.

Dad would come home after a tour and all he wanted to do was sleep and watch the White Sox. We had a ‘do not disturb’ sign on him when he was home, because he’d be gone for like two months at a time. It’s been a trip for me to be able to share even any parts of the legacy my dad left here. I’m Mud Morganfield, but when I’m up on stage I always feel Pops is there with me and it means so much that I can get on stage and keep his music alive around the world.

Later on Mud switched to bass guitar, and began dabbling in songwriting, but never really entertained the idea of becoming a professional musician himself, until his father’s passing in 1983. It was his introduction at a tribute concert to his father in 2007, and then his performance that year at the Chicago Blues Festival, that had folks really beginning to pay attention.

On Portrait, Morganfield is surrounded by a galaxy of blues stars, including Kreher and Billy Flynn on electric guitar; bassist E. G. McDaniel; Kenny “Beedy Eyes” Smith on drums; and Barrelhouse Chuck on piano and organ. Harmonica duties are split between Harmonica Hinds, and Bob Corritore, who produced the original album. Tracks 2 through 13 are in the exact order as they were on Son of the Seventh Son, so if you’ve heard that album, you’re familiar with the music, but haven’t heard it quite like this. The Delmark remastering takes the songs to a cleaner, more powerful level, making them sound brand new.

The final track, is the previously unreleased “Good Morning Little School Girl.” The Sonny Boy Williamson classic was recorded in the same sessions but given a loving mix and digital master by Delmark’s Julia A. Miller at Riverside Studios in August of this year. While “Praise Him” is sung in Mud’s (trying not to sound like his father) voice, on “Good Morning Little School Girl” it’s sometimes hard to tell whether whether it’s Mud or Muddy. Morganfield has always been told he sounds hauntingly like his father, and at times that has become a double edged sword in the son’s career.

Morganfield wrote 8 of the 14 tracks on Portrait, and while his voice sometimes is near identical to his father’s, his songwriting does differ.

I write about a lot of life experiences, but sometimes I want to see people dance and have fun. I remember once my dad was telling me that he was really down and out because people were saying his music was too slow. Too still Southern, and he had to pick it up. And he did, but I’m just saying with my songwriting, I was born and raised right here in Chicago, so I had another entity to teach me about myself and the blues. That’s what I write about.

You can’t just get up, come out your house and say, ‘Look at me. I’m a blues man.’ You gotta go through something like cancer survival, drug addiction, alcoholism. I think you got to go through something to really understand what the blues is. It doesn’t always have to be pain, but you just don’t get the blues because you can play the blues. You gotta get some blues, and that’s what I’ve been doing, getting me some blues.

Should you add Portrait by Mud Morganfield to your collection? Is a crocodile’s t-shirt close to the ground?