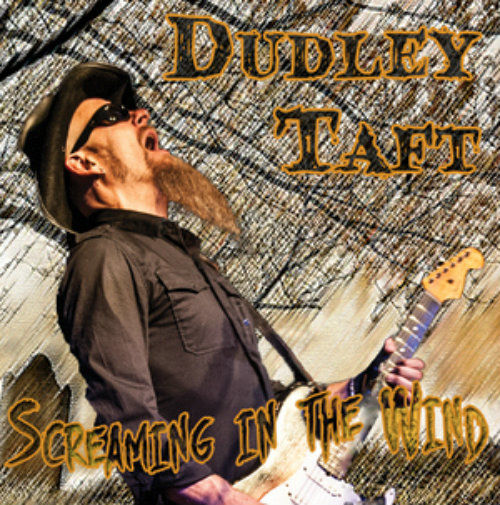 Fans of blues rock guitar and those of Dudley Taft and his chosen career path will love this album. Using the six string as his flag, Taft plants it and, once again, lays claim to his little part of the blues rock world. Nasty, filthy guitar work and superior tone; just what you’d expect from the bearded guitar wailer.

His first release, Left For Dead (2010) had a desert southwest feel to the music and story line with just a little Seattle grunge, while Deep Deep Blue (2013) saw him start to explore more of the rock side of the blues. Screaming In The Wind is no exception to this progression for the Cincinnati-based guitarist. Dudley spent twenty years in Seattle and was in the thick of the grunge movement, so there is a touch of eclectic influence in his playing.

The layered guitars on track three, “Red Line” are brilliantly reminiscent of Thin Lizzy. In fact, if  ZZ Top and Thin Lizzy had a baby, this song would need to go in for blood test, and perhaps an appearance on the Maury Show would be in order. Dudley also unleashes some Texas shred on this one and John Kessler is delivering a knock out blow with a fat lower end keeping perfect tempo with drummer, Jason Patterson. They are both locked in throughout the entire album. Track six, “I Keep My Eyes On You” has a funky guitar riff straight out of the 70’s that will make the listener think of The Ohio Players. Track five, “3DHD” shows how talented Dudley is at crafting a rock & roll — if not a pop melody. It has plenty of guitar, but parts of the song have an almost Badfinger vibe. Tracks ten & twelve seem to be the songs that are the most connected to the previous two albums, although the last song leaves the desert and heads into some Pink Floyd territory. Left For Dead (Part 3)?

Also of note is the title track. It started out as a one minute long custom instrumental riff Taft did for the American Blues Scene Magazine fundraising video at the end of 2012. “They told me it should be a song,” he recalls, “and I think it may have turned out to be one of the strongest on the album. Tom Hambridge and I worked hard to find the key imagery in the lyrics to tell the story.” Track seven feels like the most straight up blues song here. That riff is still catchy as hell.

The album is set for a May 20 release on Taft’s own American Blues Artist Group label. Former Stevie Ray Vaughan keyboard player Reese Wynans lends his mastery of the keys to Screaming In The Wind and Tom Hambridge (Buddy Guy, Susan Tedeschi, George Thorogood, Johnny Winter) produced the album and played drums on a few tracks. Screaming In The Wind was recorded at The Switchyard and Rendering Plant in Nashville, as well as Taft’s new Muchmore Studio in Cincinnati.

Other special guests on Screaming in the Wind include the acclaimed McCrary sisters, who bring their smooth gospel harmonies to the song “Barrio,” a tale of self induced misfortune, while the Muscle Shoals Horn Section shines on “Pack It Up.”

Fans of blues-rock, the  electric guitar will be more than  satisfied by this release and should be once again blown away by Taft’s tone.  We highly recommend picking this one up and playing it load and often.