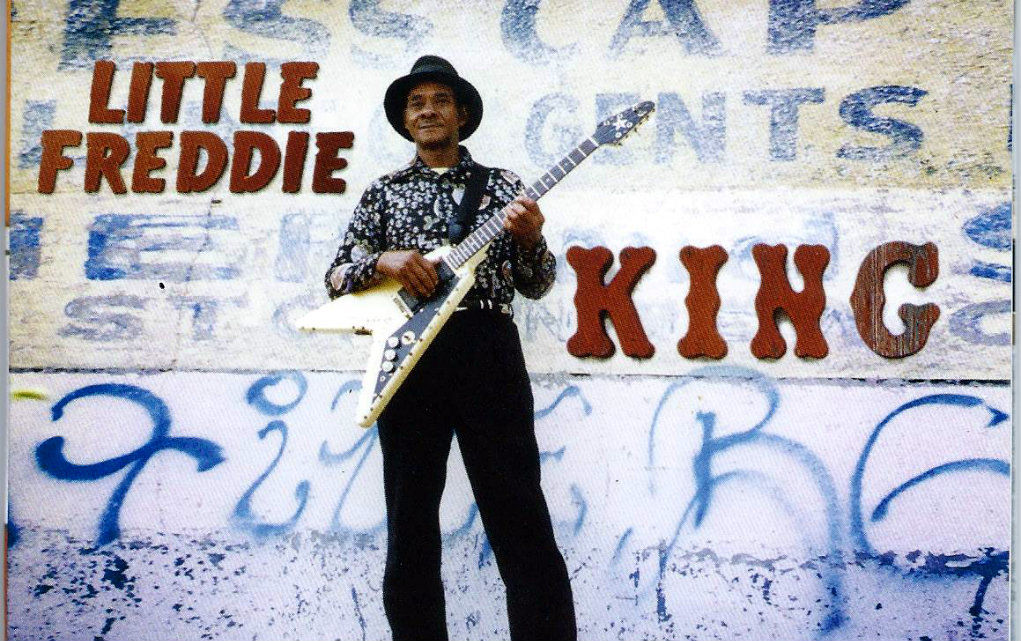 For those like us who love original, intense, unvarnished blues, Little Freddie King's 'Fried Rice & Chicken' should be on your shelf. Better yet, in your player.

Country blues guitarist and New Orleans fixture Little Freddie King is back with a sweet compilation album. Fried Rice & Chicken, on the Orleans Records label, contains some of his best work from two previous Orleans releases.

Born Fread Eugene Martin in McComb, Mississippi, King has been playing guitar since he could hold one. Taught the Delta blues style by his father, he hopped a train for New Orleans at age 14, where he began mixing his sound with the likes of Slim Harpo and Champion Jack Dupree. The seedy clubs and juke joints of the Big Easy were his university, and he was almost 30 years old when he recorded his first electric blues album with Harmonica Williams.

Seven years later he was touring Europe with Bo Diddley and John Lee Hooker, but his next recording didn’t happen until 1996. The then 56 year old veteran recorded Swamp Boogie for the Orleans label. Four years later a live album, Sing Sang Sung was recorded live at the Dream Palace in NOLA’s Faubourg Marigny neighborhood.

This is gut bucket blues y’all. Raw, edgy, and as real-deal as it comes. Fried Rice & Chicken takes the best of those two albums and combines them into one listening adventure. The first six tracks all come from Swamp Boogie. “Cleos Back” leads the charge with King’s sometimes sweet and sometimes gritty guitar taking main stage. It’s a nice instrumental introduction to what’s to come.

Next up is the longest track on the release, “Mean Little Woman.” Clocking in at just under five minutes, King packs as much blues power into that time as some players need twice that to accomplish. Even in middle age at the time, King’s voice is strong and capable. He shouts out the lyrics, probably from years of playing at places like the infamous Bucket of Blood.

The other players on this early album were Earl “Pass the Hatchet” Stanley and Robert Wilson on electric bass, Jason Sipher on upright bass, Kerry Brown and Bradley Wisham on drums, with “Crazy” Rick Allen on Wurlitzer electric piano and organ. The unprocessed passion fashioned by this group of musicians chilled us, leaving goosebumps and reminding us of the days of blues we may never see again.

The surf-rockish “The Great Chinese” has that party feel of The Champs’ “Tequila.” King’s imagining of Ray Charles’ “What’d I Say,” is a true boogie party song. Then comes the ultra-short “Kinky Cotton Fields.” Lead Belly never done it this way. The Swamp Boogie session ends with “I Use to be Down.” Right away we’re right back in the juke, desperately searching for someone to hang on to as we sway across the floor.

Things get even more serious with the final five tracks. Recorded live with a backing band made up of Anthony Anderson on bass, Bobby Lewis DiTullio on harmonica, and “Wacko” Wade Wright on drums, this is the true-blue Little Freddie King that reigns as the emperor of the blues in the Crescent City.

“Sing Sang Sung” gets the party rocking right. “Do She Ever Think of Me,” brings a little funky shuffle into the mix, and the crowd reacts aptly. There’s a nice tribute to his namesake as the band breaks into a killer version of “Hide Away.” Of course the original Freddie King stole the song from Magic Sam, who stole it from Hound Dog Taylor, who stole it from Irving Spencer – you get the idea. It remains an instrumental blues staple and Little Freddie does it proud.

“Honest I Do” is slowed to a near snail’s pace, and you can hear the strain in King’s vocals on it. To be honest, we’d have rather heard “Bucket of Blood,” but hey, we’ll take what we can get. DiTullio’s harp is great on this track though, and makes the song noteworthy. It all winds up with the rollicking “Bad Chicken” that surely had the joint jumping.

For those like us who love original, intense, unvarnished blues, Little Freddie King’s Fried Rice & Chicken should be on your shelf. Better yet, in your player.