I lost someone whose music has been with me since I’ve been alive, who helped define the good times and who made the bad times endurable.

My parents are still married. We’re still living in a condo on Lake Jackson. MTV is still playing actual music videos. I’m sold. Done. Some people remember where they were when man walked on the moon, when the Challenger exploded, or when the Wall came down. I remember the first time I heard Tom Petty.

My love for Tom Petty and the Heartbreakers follows me well into teenage years when I find myself compulsively playing “I Need to Know” on repeat, and every other Heartbreakers song for that matter. It then becomes a fixed idea with the perfect rock and roll song. How do you write a song so lyrically succinct and musically dynamic? How do they do it? More than the Campbell tone and a record of having never wasted a single note; Benmont’s technical genius; Ron Blair’s bass line on “American Girl” that takes me to intoxicating heights every time; and Stan Lynch’s hammering fills. They were indeed fingers on the same hand, as Tom put it. But it takes Tom. No one — I repeat, no one — could broker the detente between high-pitched, nasal yowl and beautiful bari-tenor. Not like Tom.

He always seemed to put a voice to a feeling you couldn’t otherwise put your finger on, or didn’t even know you were feeling until hearing the righteous indignation in his throaty interjections. Whether he’s caterwauling that he doesn’t like being the fool again or that he’s too drunk to follow, he’s singing to the rebel in all of us. To the hopeless romantic in all of us as heard in songs like “Even the Losers” and “Change of Heart.” To anyone who has ever felt like, “You know what, fuck you. I’m rock and roll, and you’re not.”

There was the time he had everything to lose and took on a whole record company anyway. Unwilling to cede creative control after Shelter Records was sold by ABC to MCA, he financed the recording of the Heartbreakers’ third album himself. In doing so, he ended up about half a million in debt. This debt proved to be something of a strategy that would have the bankruptcy court declare his unfair contract invalid.

I thought I was stubborn.

MCA finally gave in and re-signed him to a subsidiary label with a more sensible deal, and Tom’s maneuver would set the blueprint for how artists would reason with labels henceforth. The album worth all that trouble? None other than Damn the Torpedoes.

Or how about the time he took MCA on again a few years later over the markup of Hard Promises? For the difference of a dollar, Tom decided once again to take a stand on behalf of his fans. He won that one, too. He convinced MCA to sell it at the customary retail price. There was the time someone set fire to his house and tried to kill him; he said in one interview that he refused to live in fear because that would mean the arsonist won. Oh, there was also that time he was in the studio with Roger McGuinn and he told Roger’s wet-behind-the-ears A&R man where he could stick the witless material the label had written for McGuinn. Because how do you not understand the gravitas of the Byrds and the man standing before you?

Fast forward to 2002 when he writes “The Last DJ,” consummately underscoring the corruption of commercialism. I don’t know about you, but knowing what I know about him, his songs start to have even more meaning. You suddenly hear the intro riff to “I Won’t Back Down” a little louder and with a little more victory. Perhaps you sing it a little louder than you used to. I do. Especially now. And every day for the rest of my life.

It’s hard to pinpoint and put into words why Tom Petty is my hero. Maybe it’s the way he evolved, the way artists are actually supposed to evolve. Maybe it’s the way he traded in those signature squalls for more mellow but equally effectual touches that have a way of tying a song together. Maybe because he refused to be bought and sold from the very beginning all the way to the very end. Maybe because it’s been a week and I still seem to be walking around in a grief-addled fog, tearing up on a dime when certain songs come on, feeling like I and the world lost something really important. I lost someone whose music has been with me since I’ve been alive, who helped define the good times and who made the bad times endurable. 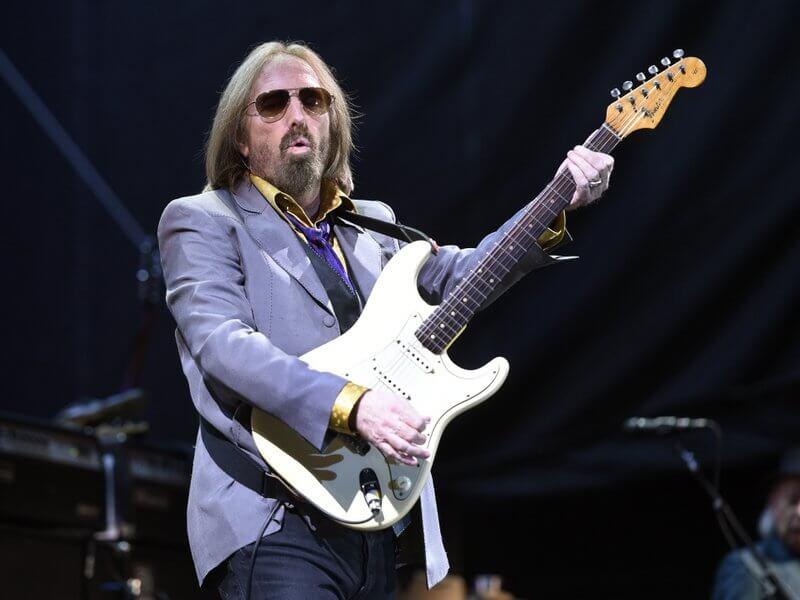 I was lucky enough to see Tom Petty and the Heartbreakers on their 40th anniversary tour. It almost didn’t happen, and I keep thinking back on that night. It was a sold-out show. I was eight months pregnant. We found a woman at the last minute who was selling her tickets, and we had to drive 40 minutes out of the way to get them. So many cons were racing through my head. It would be a late night full of driving here, driving there, pregnancy fatigue; I could go into labor, etc. But I barely even hesitated. I asked myself, “What if I never see them again?” I couldn’t live with that. I can’t believe it could have just not happened. At least I have that.  Rest in peace, Tom Petty. 1950 – Forever. In our rock and roll hearts, you will always be.

And it feels so good to know

I got you where you belong

Here in my heart, right by my side

Honey, you’re getting me by