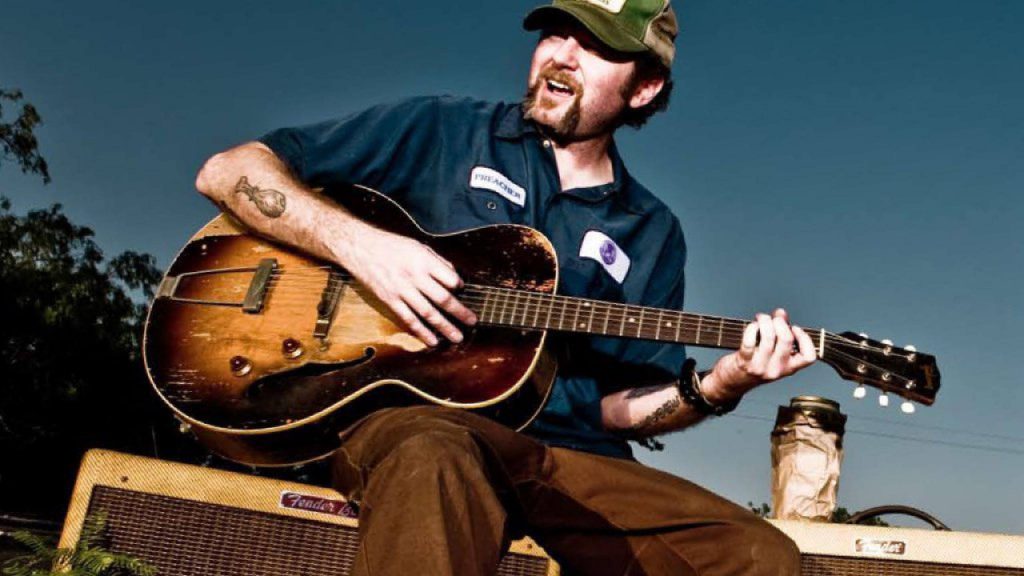 Recorded between 2017 and 2019 in Biram's own Austin studio, he covers a lot of different musical genres, lending each one his intense focus.

Scott H. Biram, famous for his ability to sing, drum, and play a harmonica, all at the same time, works hard, doing the job of at least three people. Plus, he performs with a manic intensity that makes you feel like you’re hearing holy spirits overtake someone. Prior to listening to every new album I think, ‘He can’t keep this up forever. Eventually he’s going to get a band and slow things down.’ Fever Dreams, a surprise release, is Biram once again proving me wrong.

If anything, Biram’s getting heavier, with Fever Dreams featuring a few punk/heavy metal moments. Recorded between 2017 and 2019 in Biram’s own Austin studio, he covers a lot of different musical genres, lending each one his intense focus. And, as a concession to the aging process, he even has some band-created moments, showing that while he might never lose that edge, he’s open to polishing it so it looks nice.

That means tracks like “Hobo Jungle,” which is Biram singing about losing his home. The anger unfurls over a dark riff, electric guitar chugging along next to his upset voice, cymbals occasionally amplifying his point. Its stark and confrontational, even as the distorted rhythm gives way to a slightly more delicate musical section that eventually becomes an almost-Middle Eastern sounding guitar solo. Biram locks in on the song’s emotional center, but he’s also capable of adding parts that give his tracks another dimension. He works similar magic on “Drunk Like Me,” which is also just Biram and electric guitar, until a flashy organ solo, straight out of Deep Purple’s own fever dreams, swoops in to complete the tune.

Biram also uses other people to expand the scope of his songs. He duets with fellow Austinite Jesse Dayton on two tracks. “Monkey David Wine,” is a David Allan Coe cover, both singers tapped into the rawness of the original, even nailing some of Coe’s howls. While Biram always delivers a high-energy performance, Dayton’s presence seems to help him find a new gear, perhaps because he has someone else to lean on. The track’s non-Biram-generated rhythm section frees him up , allowing Biram to focus on the singing and guitar. The group reconvenes on “Single Again,” a Gary Stewart cover. Here the band crafts something pretty and composed, almost to the point where you don’t recognize Biram, a fun way for him to show his versatility.

Biram carries that thread into “Hallelu (Remix),” the album’s most interesting moment, and a bonus digital track. “Hallelu” is the type of rocking gospel Biram is famous for, a solid tune. But the bonus remix is poppier, the melodies sung over a much less guitar-heavy track, the rhythm coming from drums and not Biram’s guitar. Background vocals make the remix sound like something you might hear in a church, rather than his usual gospel, which sounds like it’s coming off of the back of a pickup truck parked 500 feet from a house of worship, the exact distance depending upon the wording of the restraining order. It’s a very Biram composition, faithful to the album’s own original, but also showing his versatility and how despite the wildness of his performances, his songs are thoughtful.

While Fever Dreams isn’t Biram exploring new ground, he’s pushing himself and his music. The visceral explosiveness of his previous work is still there, but it’s less front and center. His evolving ability to channel that frenetic energy makes for increasingly sophisticated albums that still maintain the fearful fun of seeing a preacher who’s looking you right in the eyes and damning you straight to hell.