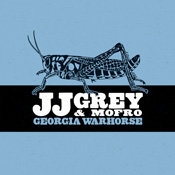 JJ Grey, driving force behind Jacksonville’s JJ Grey & Mofro, has just released a video for the song, The Sweetest Thing, the first single from his critically acclaimed new CD, Georgia Warhorse. The song features the Alligator Records star singing a duet with vocalist Toots Hibbert (of Toots & The Maytals). The video, directed by Brendan “Spookie” Daly, was filmed in Jamaica and can be below:

Georgia Warhorse, named after a particularly resilient southern grasshopper, is Grey’s best-selling album to date. Grey was recently featured on NPR’s All Things Considered. The album has been reviewed in USA Today, The New York Times, The New Yorker, The Wall Street Journal, Paste, Relix, An Honest Tune and many other national and regional publications.

You can find the American Blues Scene on Facebook