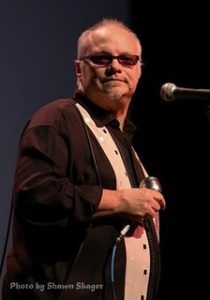 Alligator Records is pleased to announce the signing of soul singer/songwriter/harmonica icon Curtis Salgado. Salgado, winner of the Blues Music Award for 2010 Soul Blues Artist Of The Year, will release his label debut in Spring of 2012. Blues Revue says, “Salgado is one of the most down-to-earth, soulful, honest singers ever, and his harmonica work is smoking and thoroughly invigorating. He plays rollicking soul-rock…funky and electrifying.” Salgado tours constantly, and is among the most energetic performers in the blues world.

Originally from Everett, WA, Salgado grew up in Eugene, OR. He was featured vocalist of the original Robert Cray Band and later spent time as lead vocalist with Roomful of Blues and Santana. He has released a total of seven solo albums and has built a legion of fans worldwide. In 2008 Salgado overcame serious health issues and has returned stronger than ever.

Much more information on Curtis Salgado’s Alligator debut will be coming soon.

Find more information on Alligator Records on their official website!