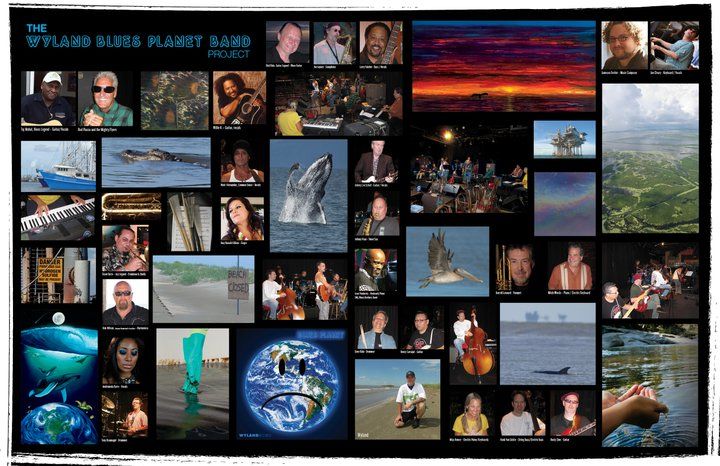 LAGUNA BEACH, Calif. — Wyland Records will release a CD of original blues music from an all-star band of blues musicians, including Taj Mahal, Rod Piazza and the Mighty Flyers, and Common Sense vocalist Nick-I, as the Wyland Blues Planet Band.

The Wyland Blues Planet Band made its debut as the opening act on the main stage of the Doheny Blues Festival on May 22, 2011. “Music and art reflect the times, and sometimes the future,” Wyland says. “Anyone whose read the papers lately knows our planet has the blues. And this music reminds us in the tradition of the classic blues style that it’s up to us to take care of our world or risk losing everything.”

Blues Planet features nearly fifty original blues songs spanning three-albums and follows up Wyland Records’ Rhythms of the Sea, a jazz-inflected tribute to ocean conservation, and is in keeping with the artist’s efforts to spread a message of environmental stewardship through the arts. Wyland’s pointed lyrics cover extensive thematic ground through a multi-layered spectrum of classic blues, from the recent Gulf Oil Spill to growing losses of natural habitat to human impacts on the environment. Slated for release in fall 2011, Blues Planet will be an exciting continuation of the blues tradition and add a new chapter in our understanding our environment and conservation for the 21st Century.

Marine life artist Wyland has done more than any other artist in history to raise awareness of the beauty of life on our blue planet. His Wyland Foundation is actively engaged in teaching millions of students around the country about our oceans, river, lakes, streams, and wetlands. He is an official artist for the U.S. Olympic team, hosted his own shows on Discovery Channel, PBS, and is perhaps best known for his Whaling Wall murals, a series of monumental environmentally themed artworks that are seen by more than one billion people every year. His latest project, FOCUS (Forests, Oceans, Climate – and US) brings together the U.S. Forest Service, NOAA, the Wyland Foundation, and numerous non-profits to teach young people about our forests and ocean – and how these two irreplaceable resources hold the key to our future. In 2010. the United Nations issued a series of commemorative stamps of Wyland artwork to celebrate the 50th Anniversary of the Intergovernmental Oceanographic Commission (IOC). Wyland was recently inducted into the Explorer’s Club and is a member of the International SCUBA Diving Hall of Fame. But the artist says his proudest achievement “is having painted eco-murals with more than one million kids in all fifty states and other countries and inspiring them to be youth ambassadors for the planet.”