SOUL POWER, The Rumble in the Jungle 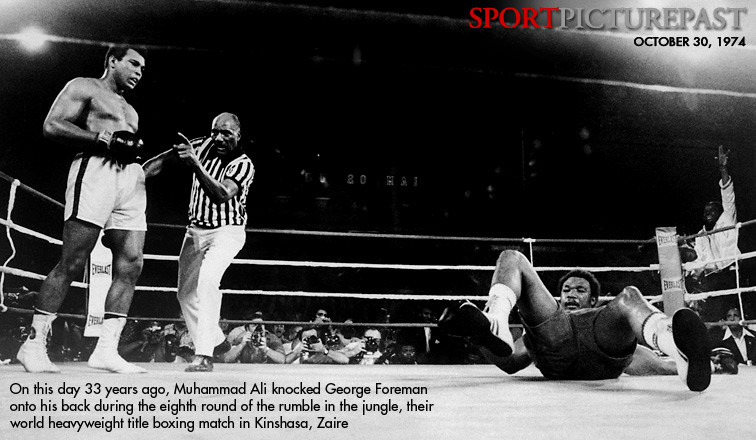 Today marks the day, 38 years ago, of a wildly iconic time in History — the famous Rumble in the Jungle. The fight was between former heayweight boxing champion Muhammad Ali and George Foreman, the reigning heavyweight boxing champion at the time. The match was held in Zaire, Africa, preceded by a three day music festival featuring some of the most popular black performers of the era, B.B. King, James Brown, Bill Withers, and more. The New York Times later described the musical event as striking sociocultural moment. “African-American and Latin musicians were being introduced to Africa,” the Times article read, “and African musicians amid Mr. Ali’s black-power politics and a hodgepodge of visiting music, sports and literary figures.” Both the fight and the music became a towering monument in developing modern culture.

It was a time of great social upheaval. Ali had previously been suspended from boxing for refusing his draft into the U.S. Army to fight in Vietnam. The move was made on a number of grounds; primarily religion and in protest of the continuing rampant racism of the time.

The famous boxer had recently converted to the teachings of Islam, who’s word protested war of any kid. It was also a strong representation of the day’s climate; The civil rights movement was still in full swing, and the boxer formerly known as Cassius Clay was a masthead in the struggle. His message was simple: why go thousands of miles away to fight for someone else’s freedom when his own countrymen were denying freedoms to an entire race at home?

His actions were supported by a great many, especially when criticism for the Vietnam was was at an all-time high. Ultimately, however the move landed Ali in a court battle to fight for his own freedom. In the meantime, his boxing licenses were revoked for years. After a hard fought road, he and then reigning champion George Foreman met in one of the most hyped matches of the century — the likes of which have arguably never been seen experienced since. After 8 rounds, Ali hit Foreman hard with a combination punch, knocking out the champion and claiming the title.

The evidence of the long lasting impact and cultural importance of the events that took place in Zaire in 1974 can still be readily felt. The excellently insightful 2009 documentary, Soul Power, about the music festival showed the social climate during the event, the preparation, the music, and described the reflection of the events to the charged political climate in the United States. The hit 2001 movie, Ali starred Will Smith as the iconic boxer, and featured the Rumble in the Jungle as the setting for the climax of the movie. Ultimately, both the events and the music helped forge history, as they often do.

Find a copy of Soul Power